Our ethic for our 10 years as Above the Fray has always been to minimize our impact as to what the weavers of the region choose as design, preferring that they reach into their creative talent and traditions as opposed to chase what they may think will sell well in a western-style market that they have not met. 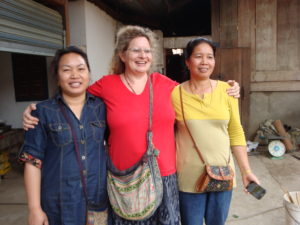 Two of Maren’s good friends: Phout on the left, and Souksakone on the right. Both are leading textile weavers, dyers and designers in Houaphon Province

This last year we broke that rule, and we’re glad we did!

Phout, a master-weaver and dyer who lives in Houaphon Province, Laos, had woven several gorgeous all-silk “man-woman” healing cloths some years ago. We have found this traditional style of shaman’s shawl (in Lao, phaa sabai) to be uniquely attractive.

The “man-woman” phaa sabai is a complex silk of three contiguous panels: the two end panels are woven in the discontinuous supplemental weft style with the center panel left in plain-weave with no supplemental decoration. The two end panels are of identical design, yet one side has received a full spectrum of supplemental colors to highlight the motif-patterns, while the other side is left in only two muted colors that seem to hide the design. The weavers smile when they tell us that the vibrant, complex side represents the spirit of the female, while the “simple” side represents the spirit of the male. 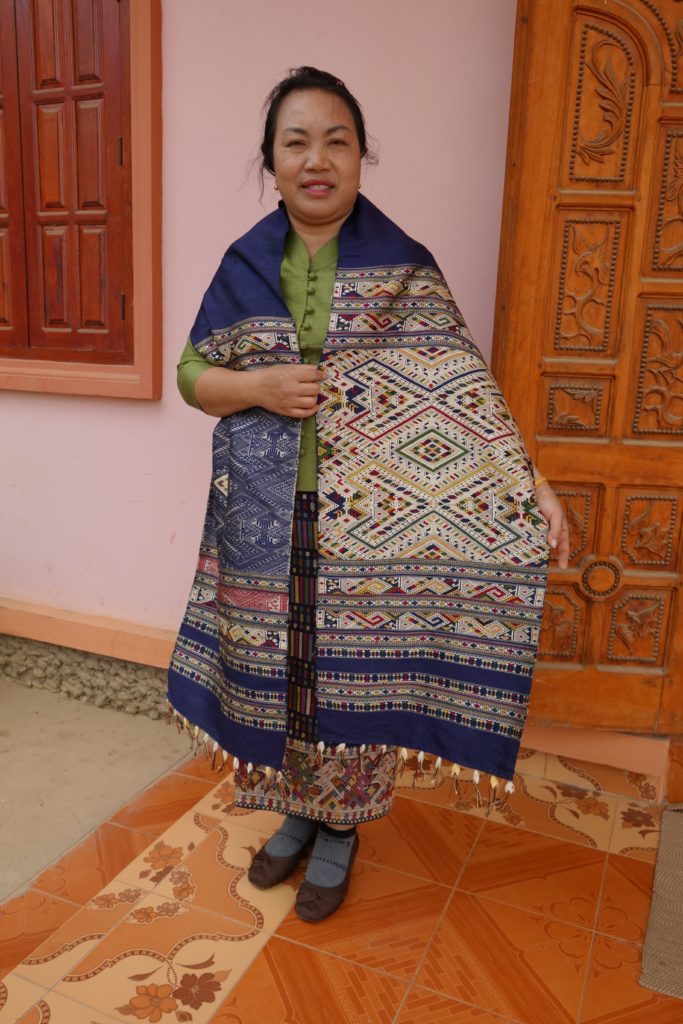 Phout models one of the 100%  silk man-woman phaa sabai we had ordered.  The silk is locally-raised, and Phout did the natural-dye work herself.

A local healer would traditionally use such a cloth as a tool to gain access to the “spirit world” to perform a healing, whether the injury were physical, mental or spiritual. The “man-woman” expression is symbolic of the need for humans to have spiritual balance within themselves; a lack of well-being would be a confirmation that one’s “life-force” is in need of repair.

Phout had indicated that this complex design was not finding a niche in the marketplace, and that a weaver’s time was better spent on other designs that the tourist markets were finding more profitable (phaa sabai cloths require a lot of hand-reeled silk and time on the loom). 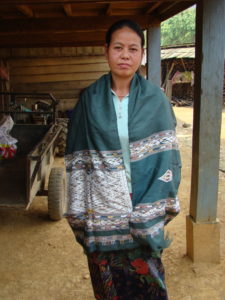 Another “man-woman” healing cloth from the same region; the weaver is the model.

“But they are so beautiful, and traditional,” blurted out Maren. Phout rolled her eyes. But the truth is obvious: if it doesn’t sell, then it cannot take up the valuable time of the weaving experts.

So we ended up “ordering” that she ask one of her finest weavers to weave an older man-woman healing cloth design Phout has in her archives, in three different ground colors.

They are stunning! Even Phout was excited about how they came out. Yes, we paid a bit of a premium for the “special order,” but we believe they will sell well in the emerging international market, and perhaps create some momentum for this style of traditional cloth to remain relevant in the styles of cloth that the master-weavers perceive the market will support.

Phout is a wonderful energy and loves to laugh, and she and Maren have a sister-like affection for each other. Every time we get together we soak in each other’s company and, thanks to our translator Mai (who is a childhood friend of Phout’s), we can share thoughts and stories. 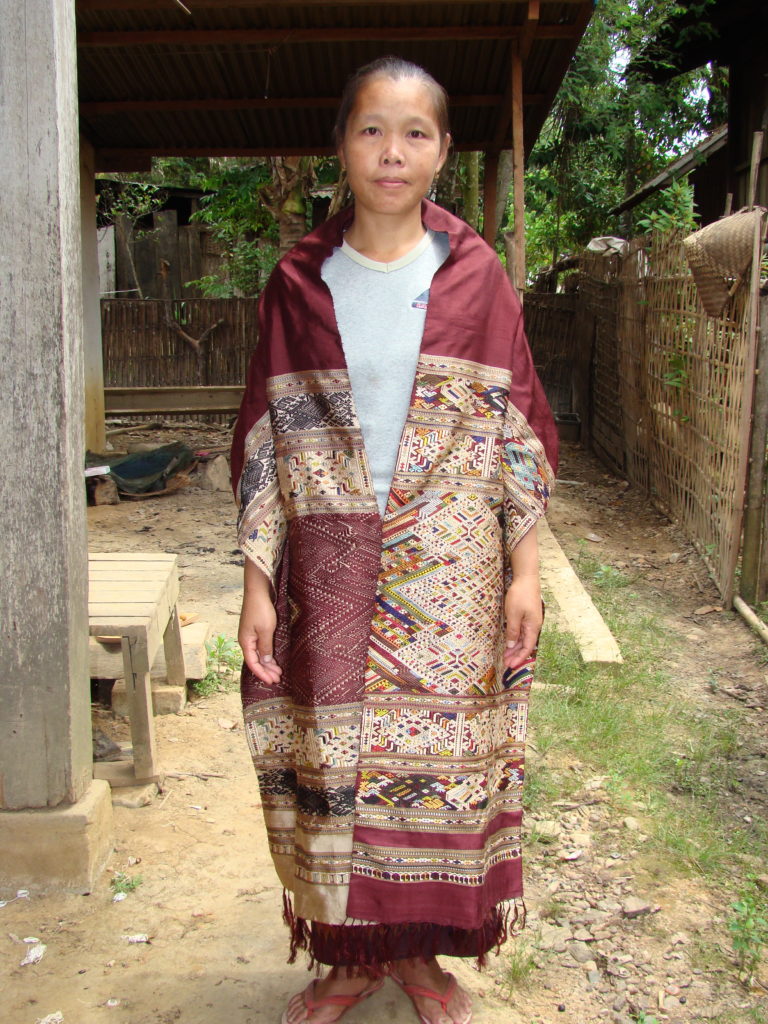 Another 100% natural-dyed silk “man-woman” healing cloth modeled by the weaver.

Here is the tale, appropriate perhaps for the political season, of Phout finally learning how to pronounce my name:

Again I pushed my lips into an open pucker, and slowly rolled as long a “j” sound as the consonant can have in English, followed by a quick “ah,” and ending with the soft extended “shhhhhh,” of a librarian. Then said slowly again: “J- j-o-shhhhhhhh.”

I paused a brief second, then pushed my name out a bit faster: “Josh.”

Phout focused. She started with a buzzing “dzzzz” and then puckered to an English “j.” She held the sound and rolled her eyes towards me for confirmation. 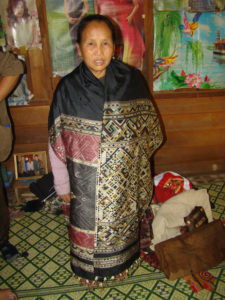 Phout’s aunt, Sukkhavit, dons a shaman’s traditional healing cloth; this one is not of the “man-woman” style, but is equally stunning.

I tried to infuse some optimism into her by widening my eyes, and I offered a quick “jo-” sound, to indicate that our “j” sound needs to jump straight to the “ah”, and that the consonant cannot be “buzzed” like the “z” in “azure.”

Phout jumped off her “dz,” shot across a long “ahhhh” and landed back on the “dz” sound again. “Dz-aah- dzzzz.” she enunciated in a fizzle. “Dj-dj-aaaah-zhhhhhh,” she echoed again, nearly begging for approval.

It was our friend Bounkeo, smiling at Phout’s side, who came to the rescue. “Djahshh,” he blurted to her matter-of-factly. She then she repeated after him a shorter, closer “Djahshh.”

Bounkeo threw out his version again, and Phout again repeated it. 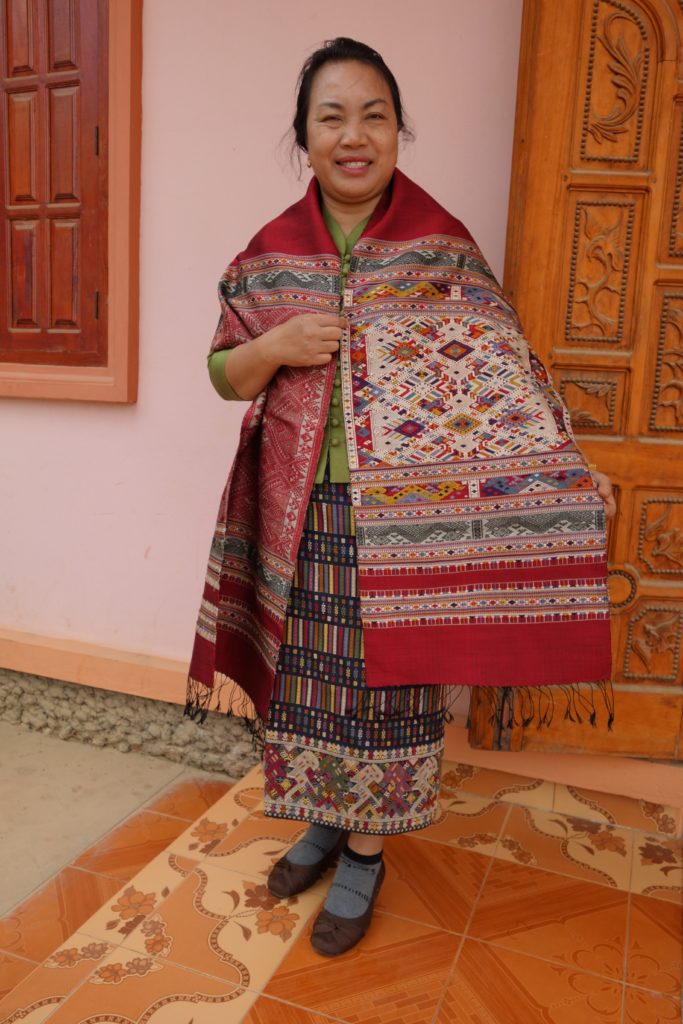 Here Phout dons another style of a “shaman’s shawl.” Her design and dye work is some of the finest in the world. She has 50 weavers who work under her direction.