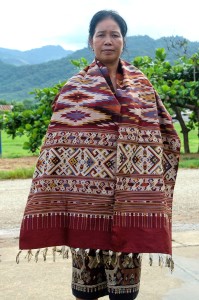 In the remote Annamite Mountains of NE Laos, and most notably in the Xam Tai District of Houaphon Province, the rich, cooperative, silk-weaving traditions of the Lao Loum and Tai Daeng ethnic groups still thrives, much in the way it has for millennia. Our family (mom, dad, and our now 22 and 19 year-old sons) has had the great privilege and opportunity to nurture friendships and forge textile-based business relationships with Xam Tai’s artists for the last 10 years. Their art, traditions and warmth have nourished us and opened up worlds of personal insight.

The silk weaving arts of the region are born from both Buddhist (the Lao Loum ethnic group) and animist (Tai Daeng and other Tai groups) traditions that are focused on healing and maintaining the strength of both the individuals and the community itself. The silk-raising and textile-creation processes have been central to beliefs and spiritual health and have also provided an economic foundation for countless generations. Not to diminish the essential building and farming roles of the men (all villagers participate with planting and harvesting), the women’s historical central role in textile creation has supported both core cultural beliefs and access to the cash-based trade-economy of the outside world. Because of this, women have been, on the whole, equally empowered and valued within the culture.

A weaver models her newly-woven shaman’s shawl. The silk is locally-raised and naturally-dyed.

Local tradition holds that these complex weavings grant healers access to the spirits that affect health, both of the individual and of the community. Ancient motifs are woven into the textiles forming the geometric complexity; river-serpents (ngeuk) emblematic of female power, elephants (saang) that uphold political power, “hong” birds that represent male power, ancestor spirits, and fierce giant spirits (phii nak). These spirits can be invoked by shamans to heal a person from an injury or fever, protect an infant, revitalize an underperforming rice-field, or generate luck for a business venture. 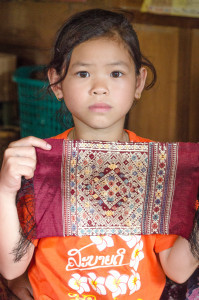 Even today in the shade of the thatched-roof homes in Xam Tai, silk shaman, healing and other ritual and household textiles are still woven for economic support as well as actual village use. However, the textile’s role of accessing spiritual and ancestral power for healing is diminishing as their world increasingly overlaps the modern 21st century.

While factory-spun silk, analine dyes and synthetic fibers are all readily available in local markets in Laos, the ethic of the silk-artist community of Xam Tai demands that the traditional processes be maintained. This cultural ethic has, for hundreds of generations, supported a cooperative and healthy lifestyle and economy that has allowed their traditional way of life to endure into the 21st Century. Their recent efforts to reach larger outside markets, as through our business, will be essential if these traditions are to continue to remain vital and attractive to future generations of Xam Tai’s cultural silk artists. 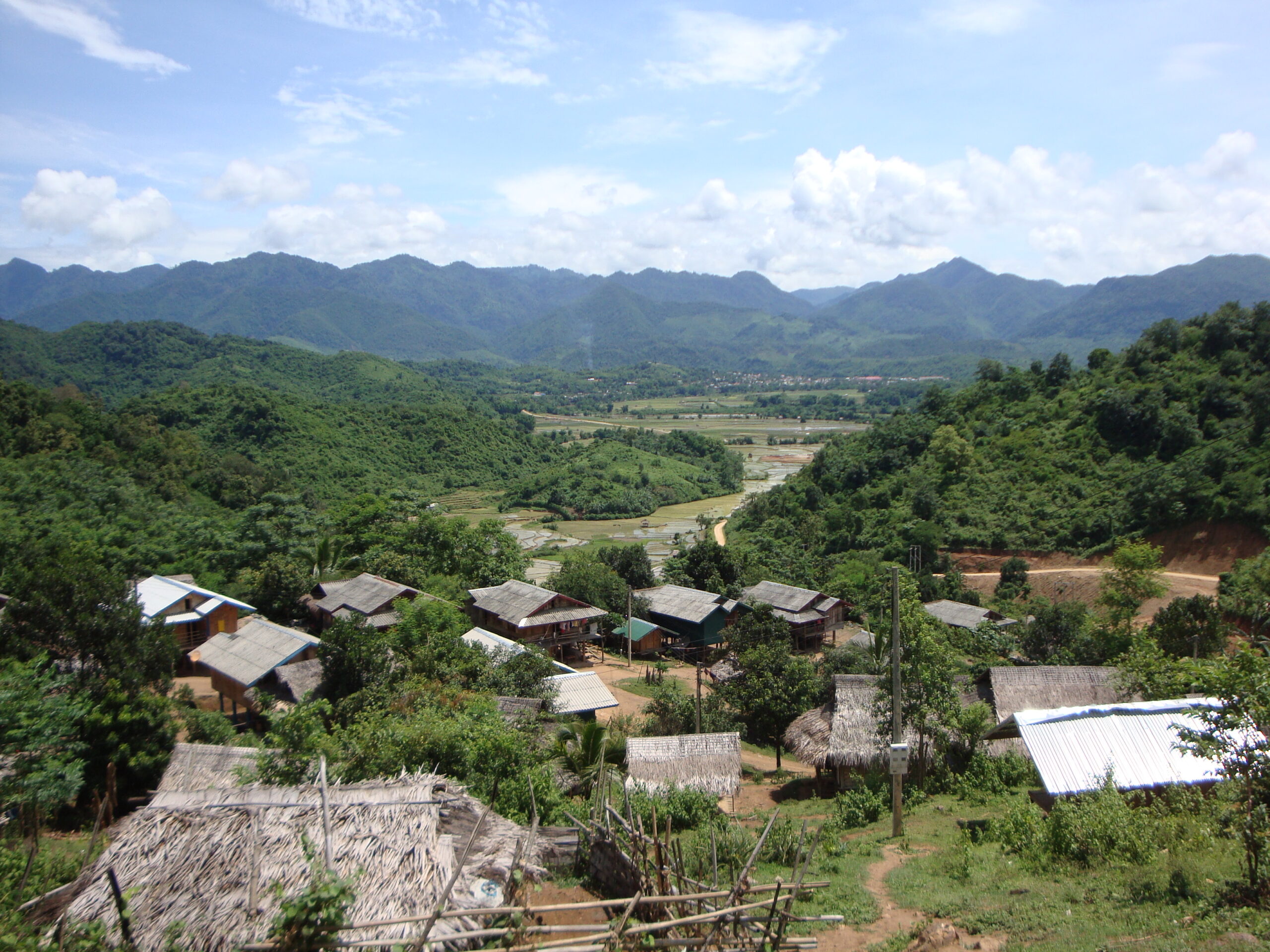 The beautiful and remote Xam Tai valley in Houaphon Province in NE Laos. 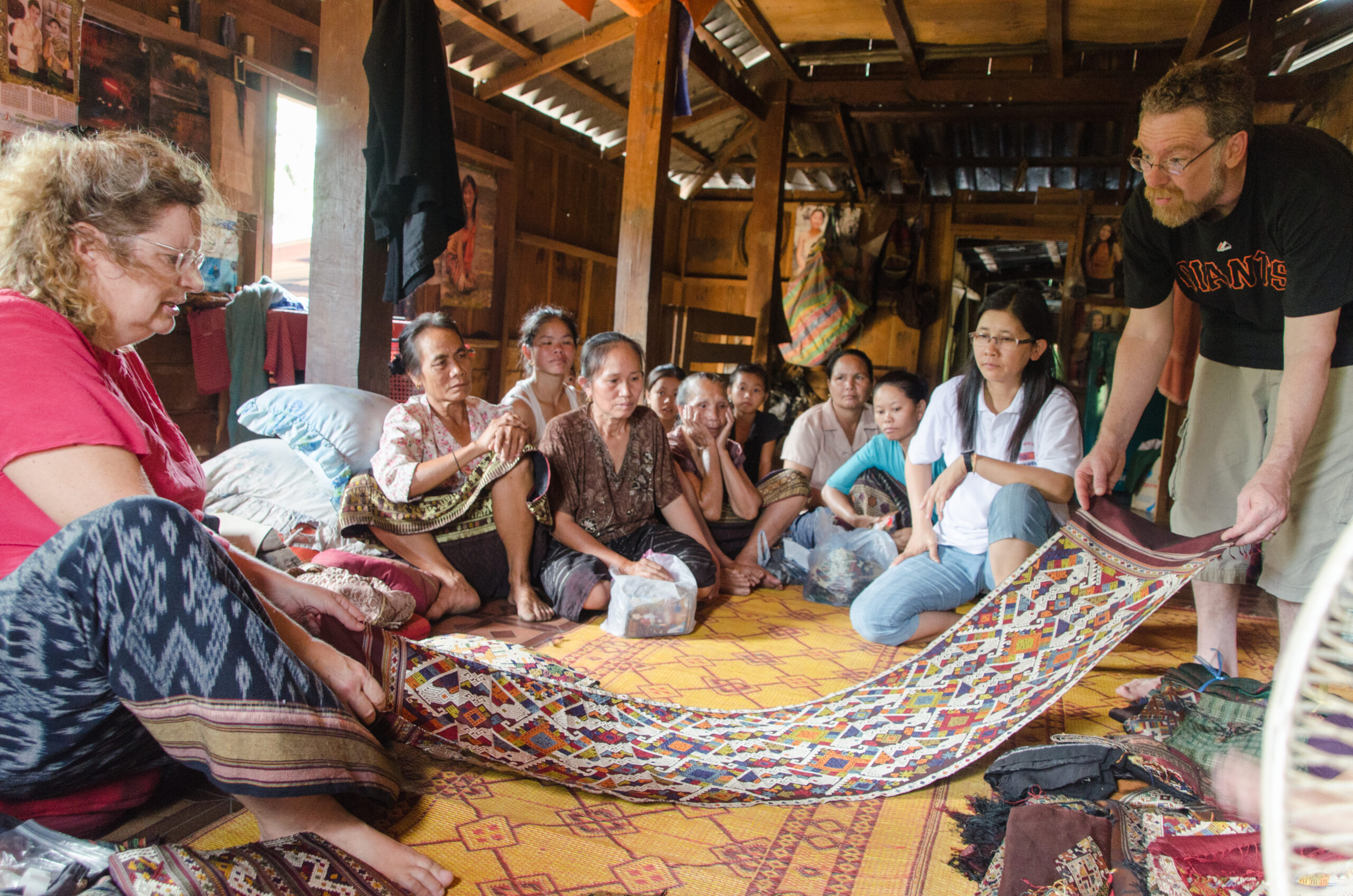 Maren and Josh study a textile with the Xam Tai weavers.