The elderly gentleman sat on the corner of the second-story outdoor deck that led to his home’s entrance, his eyes focused on the bamboo basket that sat half-finished in his lap. Like all the village’s older homes, his sat on 8-foot stilts; under the home were the tools of life: a wooden plow, a warped loom, a pile of drying rough-sawed boards, a gas-powered rice thresher, a motorcycle, and several baskets covered with dark cloth. 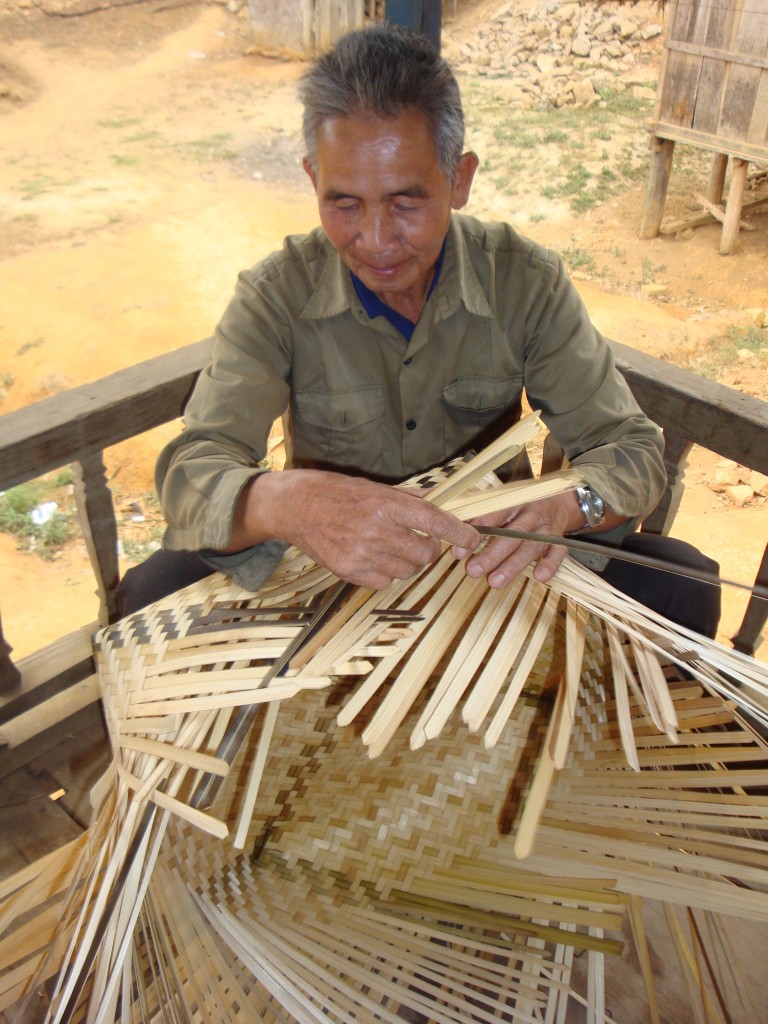 “Sabaidee,” I said and I brought my hands briefly together under my chin, and then I waved hello. The wave caught his eyes and he smiled. “Sabaidee,” I repeated more confidently. The man brought his hands together as well, and then waved his left hand over his ear and gave a shake, indicating that could not hear. Maren pointed to her eyes and then to his basket, and then made a swooping gesture that inquired if we could come up and join him. The old man grinned widely and waved us up the steep ladder-steps to the deck.

It has become our routine when initially visiting a village to just walk through the narrow paths that weave around the thatch-roofed homes and sheds seeking anyone who is engaged in getting something done – perhaps a weaver at the loom, or someone fixing a fishing net or running a billows. There is no such thing as trespassing – the village is open to everyone – and it only takes a eye-contact and a smile for a stranger to receive the same in return.  This moment brought us a basket-weaver. 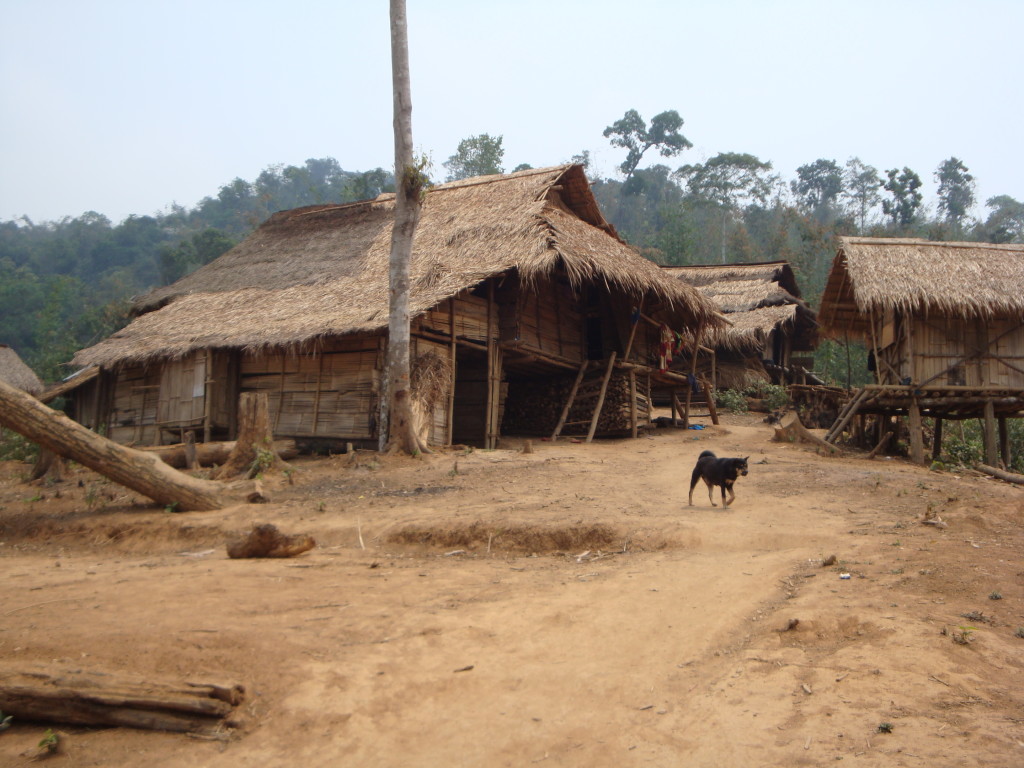 Mai, our dear friend (and today, translator), and Maren and I took off our flip-flop sandals, climbed the well-worn ladder-steps and took a seat on the untreated bench. The man smiled and nodded. Maren reached over to feel the bamboo strip he was weaving together, and the man proudly held up his loosely woven broad basket – it was the style of basket used for raising silkworms. I took out my camera and lifted it in his direction, asking if a photo was permissible. He nodded ok, straightened his back, and, masking himself with a most studious look, determinedly went back to the weaving task while we snapped a few shots.

“Hal-lo,” said a disembodied voice, and then a younger man came out from the home’s second-floor entry. “Sabaidee,” all three of us guests replied, again with hands pressed together. The man spoke quickly in Lao, first thanking us for visiting. Mai translated: “My father had been a soldier in The War as a young man when he lost his hearing. Please excuse him.” 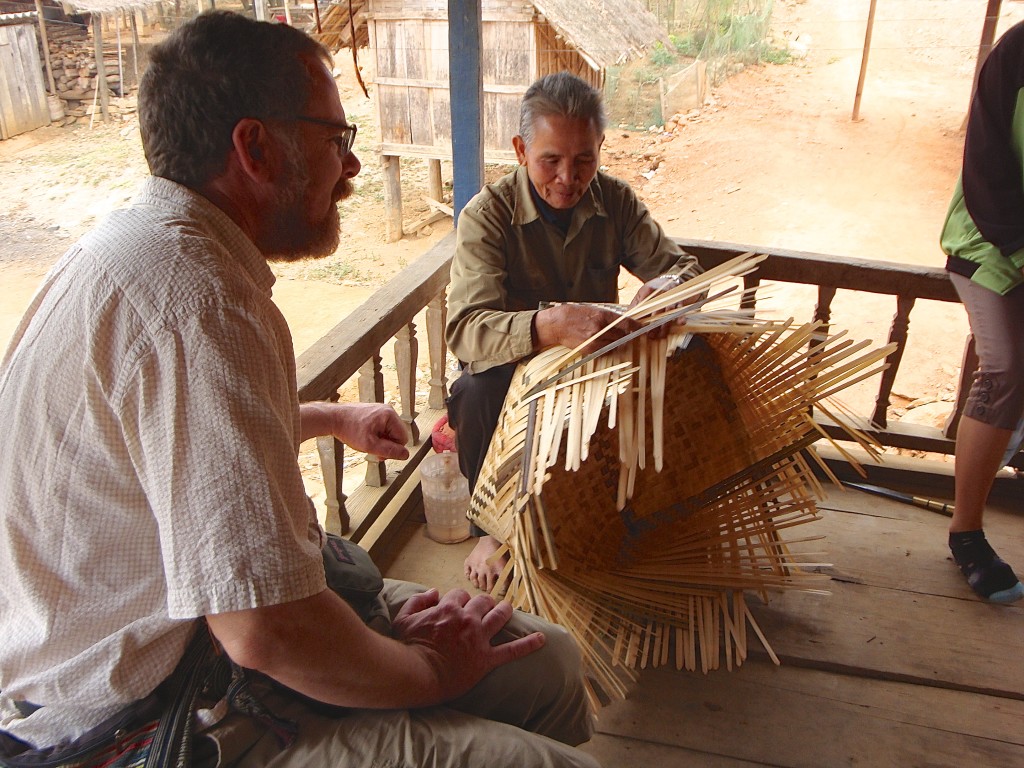 Josh visits with the basket weaver.

The elder watched his son and nodded, smiling, and then began: “As a young man I was a soldier in The War,” the elder said directly to us in a loud voice. “But I can no longer hear. A large bomb went off very close to me. After the war, doctors tried to fix my ears, but they cannot..” He looked away from us. “I saw a doctor in Vietnam, and another in China. But no one can fix it.”

The son’s wife appeared from inside the house with a plastic tray holding four rinsed glasses and a plastic pitcher of water.   She poured three glasses, and Mai, Maren, and I each reach for one. It is hot, dusty, and humid, and the water is welcome. [And yes – Maren tossed me a crinkled-eyebrow that warned: “Hope we don’t get ‘the runs’.” Etiquette can demand a little risk-taking sometimes.] 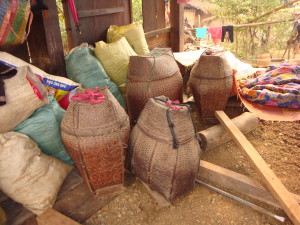 A clutch of stunning old Lao Loum storage baskets woven of rattan, bamboo, and wood, and about 50 years old.

The elder returned his gaze toward us and smiled again: “I am not sad, however. I have a good life. I have two sons, each is married with a family. I have been a farmer, and we have been well.”

We nodded at each other and Maren, in stilted but surprisingly adept Lao, told him – quite loudly towards his ear – our names, where we were from, that we had two sons in college (but no daughter-in-laws yet), and that, while we had visited Houaphon Province many times, never his village. He smiled, and, well, perhaps understood us. The son and daughter-in-law shared about their children, who were at school or elsewhere working at this hour. Water glasses were refilled. 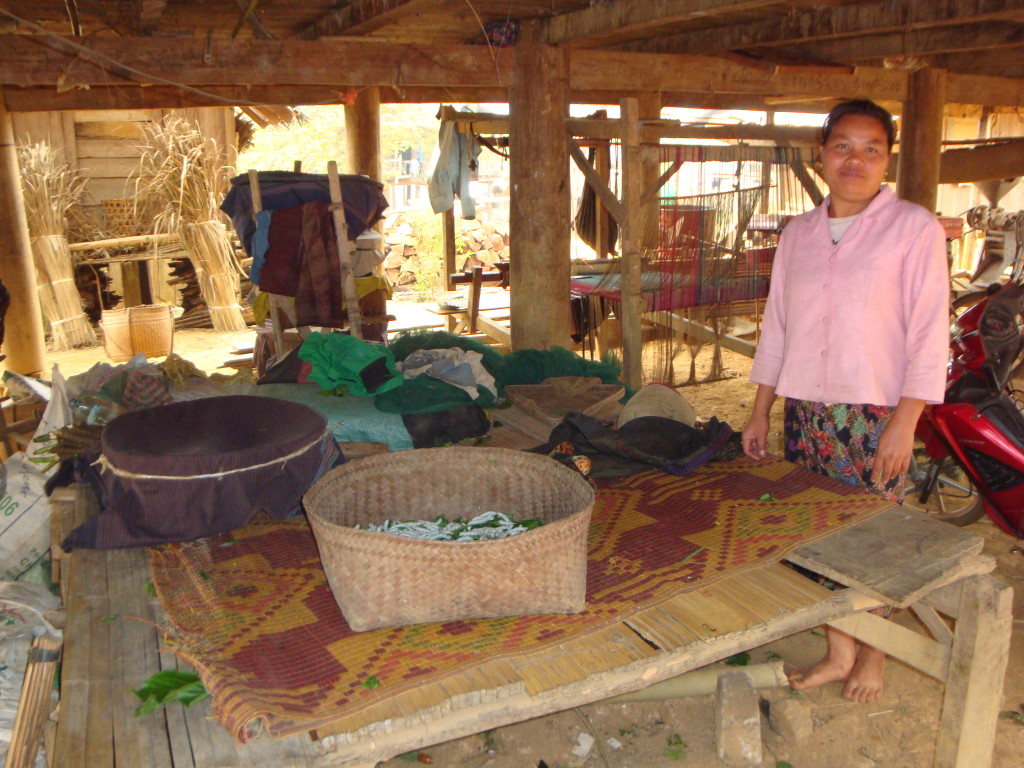 The basket weaver’s daughter-in-law shows off their crop of maturing silkworms being raised under the house.

Maren and I refocused our attention on the basket that sat in the elder’s lap and asked,  “How did you learn to weave baskets?” Mai translated our question for the son, who then literally yelled the question in his father’s ear. The elder nodded emphatically and told us his father had taught him, before the War. “Now that I am old, like my father was, farming the rice fields is more difficult, and so I spend time on these small tasks.“

He looked away again, but continued to talk to us through his son: “I am sorry I cannot hear you well. But even the doctor in China could not fix me.” He looked back and we nodded at each other, and he looked away again. “The bomb – it landed very close, and I was thrown through the air and landed in the dirt. Everything was suddenly covered with dirt, and I did not know if I was still alive. I could not feel anything.” He paused.

We all paused. In the still heat, we listened to the buzz of a nearby cicada. “I did not know even if I still had my arms and legs attached. I could not tell. I was covered in dirt.”

He gaze shifted back to us: “I was very lucky.” His smile returned. “I still had both of my arms, and both of my legs.  So I could still be a farmer. I only lost my hearing, which the doctors cannot fix. And I am well. I have raised a family and have a good life.” More nods.

Mai and the family exchanged a few sentences left untranslated, and we then excused ourselves to let the family get back to their tasks. 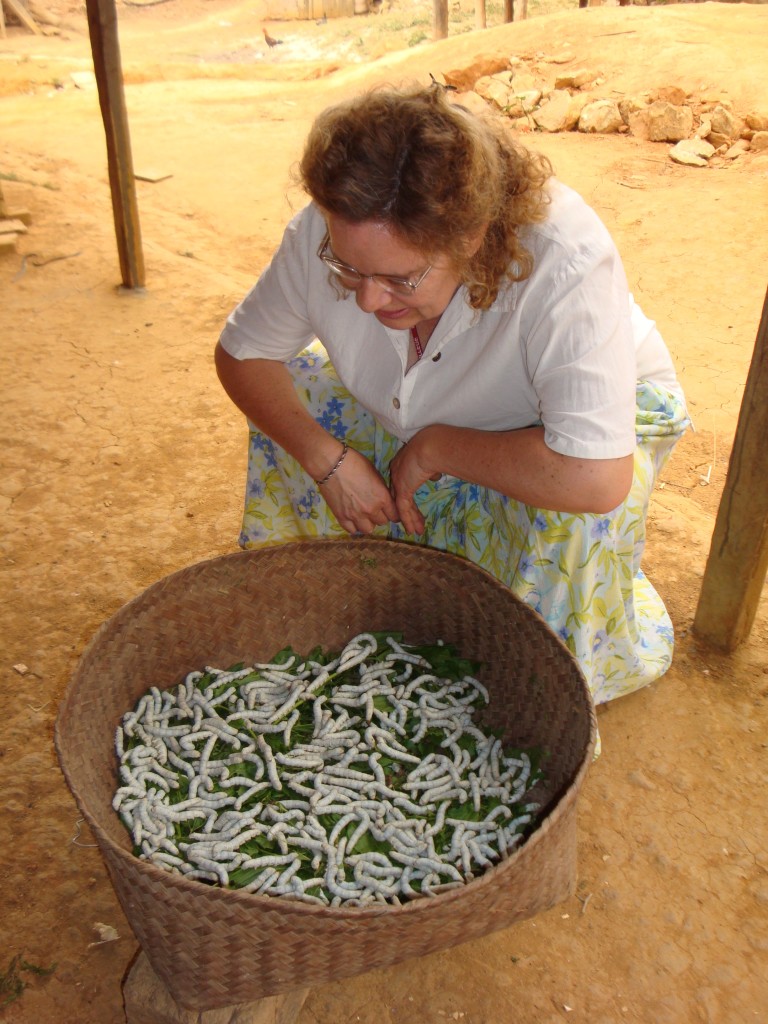 Maren checks out the crop for the upcoming silk-weaving season.

Once down the ladder-steps, the daughter-in-law took Maren by the elbow and showed us the silk worms that sat in the already-woven bamboo baskets in the shade of the home. The 3-inch white worms – several hundred per basket which looked to be happily chewing on mulberry leaves – were just a few days from when they would begin to spin their precious thread.  The Spring crop’s strands will be harvested – then spun, dyed, and woven –  starting in just a few weeks.

We thanked our hosts, who in turn thanked us, and then we all thanked each other again. We wave a quick “sabaidee” with the hands towards the old man on the deck, who nods but keeps his own hands busy with the bamboo.

Then we turned and continued our afternoon’s walk in the village.