The elderly woman, intently concentrating on the narrow weaving set on the full frame loom in front of her, chewed on her gums as her thin, brittle fingers deliberately tied the supplemental colors onto a row of silk weft. Her hands, knuckles slightly swollen with arthritis, reached automatically for the shuttle and she deftly tapped the shuttle across the top of the weft threads, adding another silk-thin length to the narrow skirt border she was weaving. The 5-inch wide strip, upon completion, would be sewn onto the bottom of a Lao skirt (phaa sinh) for colorful decoration and as protection of the larger skirt body during wear. 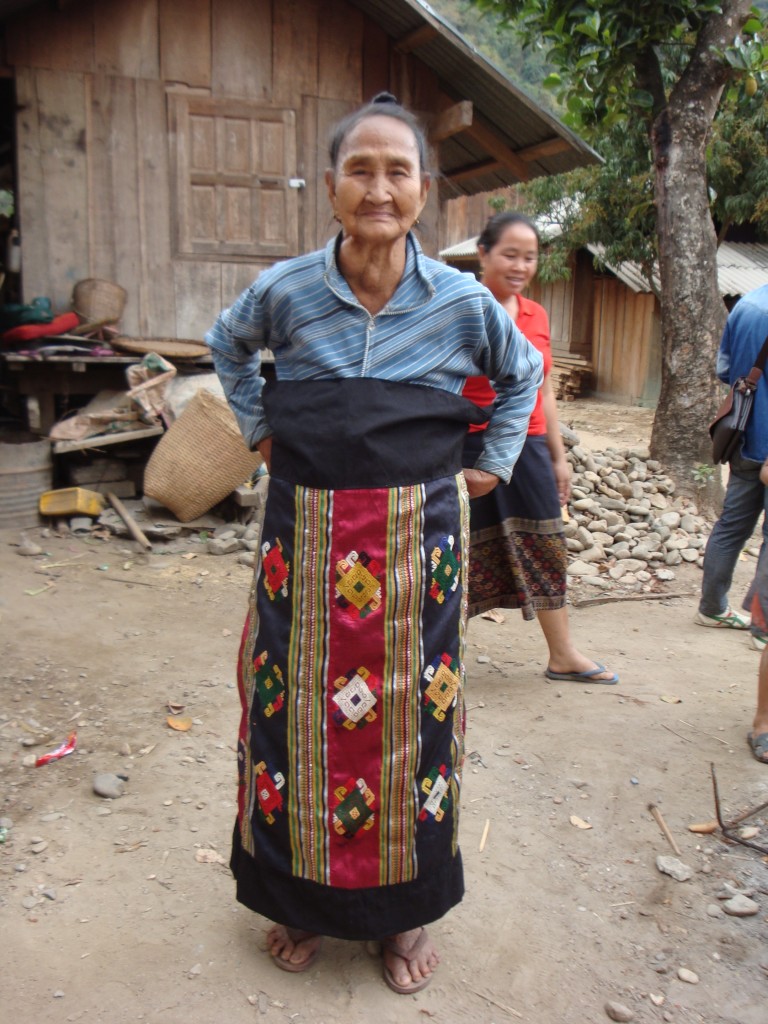 She glanced up at our faces briefly, and I held up my small camera with raised eyebrows in a silent appeal for permission to film. She gave a quick nod and then, with her concentration seemingly doubled, she sharpened her posture and returned to the methodical and creative task of turning nature’s silkworm thread into beauty and spirit. I pushed the start button and began to archive her talent.

She licked her lips and set a firm and consistent pace as the camera studied her deliberate and smooth motions. Her deep moist eyes measured every finger’s measured movement. 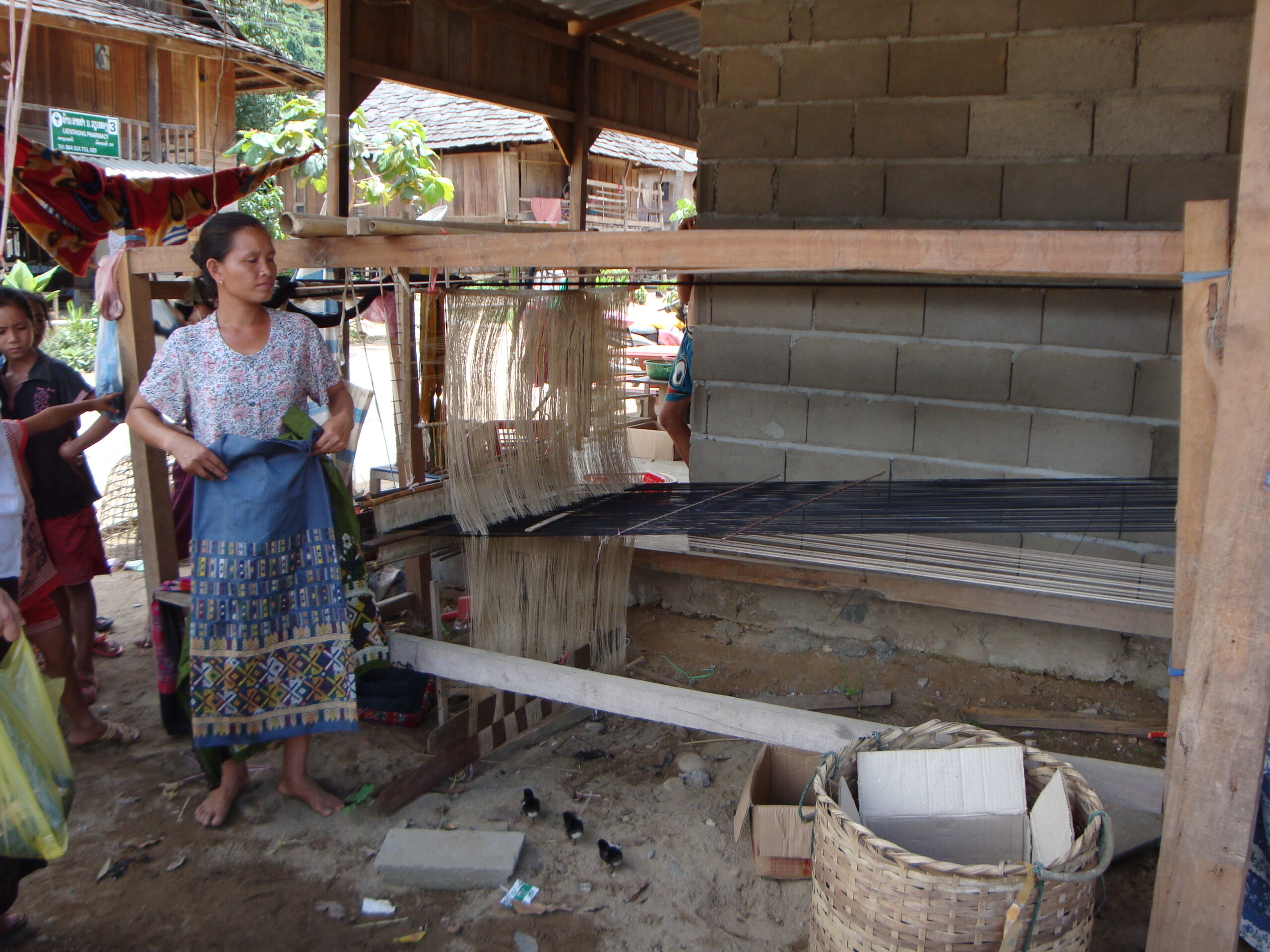 This is a loom set up like Me Tai Lu’s loom. The black warp threads are primary; the white warp threads is the supplemental warp. The vertical tan threads are the pattern template (khao ti dai)..

The woman was working with the silk raised in the village where she lived, which is known for its sericulture. Her pattern template (khao ti dai), the web of “instructions” that assured every weft line was accurately formed, was made of a coarser string, no doubt because it was easier to feel and manipulate with her worn fingers. The design required surprisingly intricate finger motions in applying the supplemental colors, and the shapes of the textile’s woven motifs were knife-edge precise. She worked her fingers in an even rhythm. Perhaps her fingers were a little slower than that of a nimble 20-year-old, but her measured precision, molded by 70 or more years of practice, revealed an adept efficiency that was a pleasure to watch. She wove for 3 minutes in focused silence as I filmed her from a variety of angles and zoomed in on her patient, trained finger-work.

I clicked off the camera and casually bowed my head with my hands together under my chin as a traditional “Thank you.” 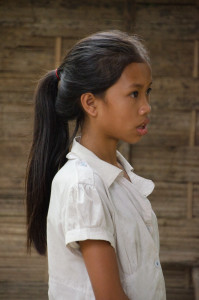 “She is the oldest woman in the village.” Mai’s voice surprised me – I had no idea she had crept up on us. Mai, our friend and translator, had grown up in a nearby town, and she had relatives in this village and had known this woman, at least casually, for over 40 years. (Mai seems to have relatives in just about every village in Houaphon Province!)

“Her name is Lu. We call her Me Tau Lu, Grandmother Lu,” said Mai and she turned and asked a question of the old woman. The elder stopped her concentration, smiled toothlessly at us, and returned a sentence.

“She says she is over eighty year old,” Mai continued. “She does not know exactly how old, but she can remember back longer than anyone else. She wonders if you would like to see a piece she has finished. Perhaps you would like to buy it?” 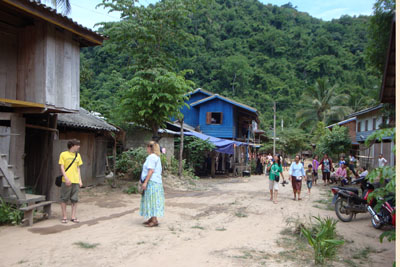 Maren and Zall in the village in Houaphon Province, Laos where Me Tau Lu has lived her 80+ years.

“Of course we would like to see your finished piece.” Maren answered. The elder turned to a young boy who had been watching and gave sharp directions. He dashed off, only to appear a moment later with a tidily folded sinh, or Lao skirt, held flat in his hands.

Through Mai, we learned that this skirt had been made a few years ago, back when her fingers were more nimble and her eyesight sharper. Given the sinh’s size and intricacy, it took two or more months to weave.

She stood up from her worn wooden loom-bench and took the fabric from the boy’s outstretched arms. She shuffled into the sunshine and, after again straightening her posture, she wrapped the skirt tightly across her belly to show off the intricate pattern.

And indeed it was, and is, a stunning 100% silk sinh woven from silk that had been raised, and naturally-dyed, in this very village.   The pattern – seen in the photo – was an older style and a less common skirt form, especially for its vertical stripes. (Most skirts resemble the design worn by the woman in the background of the photo.) The central motif of her sinh was also less common: the crab, which lives (and is hunted) in the clear freshwater rivers.

Our friend and translator Mai (in the green) and a seri-culture expert looking at the silkworm cocoons that are attached to the board. The worms are in the stage where they are actually making the precious silk.

“Did she spend her childhood here?” Maren asked through Mai.

“Yes,” Me Tai Lu answered as she posed. “I was born in this village, and I raised my children and grandchildren and now their children here, too.”

“What else do you remember?”

“I remember the French [who occupied the region until 1953], when they visited us here. They came a couple of times, and were very nice – and tall, too. They walked down the street and shook the hands of the men. I thought they were very kind.”

“Do you remember the war?”

“Oh, yes. I remember the bombs and the sounds that they made. We had to move our entire home into some caves that are over that way,” and she waved her hand toward the lush limestone hills. “We worked the fields at night then, planting and harvesting the rice.” Her voice was firm, and she looked directly at us as she spoke. “I had young children then. Now they are grown up and old, too” she laughed. “Two of them now live in Vientiane (Laos’ capital), and one lives here.” 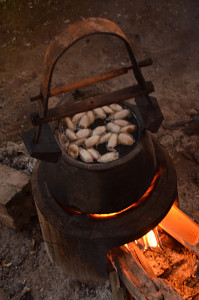 The cocoons are put into boiling water for about a minute before the silk is hand-reeled.

Maren eyes Me Tau Lu’s skirt, still stretched across her waist, and says to the woman in Lao, “Sinh, nyam lai.” Skirt, very beautiful. The woman turned towards me, pointed to my camera and stiffened herself. She held a firm face for the photo; smiles are reserved for present, shared moments, not moments frozen in time. I snapped the shot you see here.

The woman flipped a quick few words to Mai, who smiled. “Mae Tau Lu asks if you want to buy this sinh. It is for sale.”

“Chou, chou!” Maren blurts out, turning directly to the weaver. “Um … Me Tau Lu, sinh to dai?” Skirt how much?

The elder offered Maren a big grin and nodded her head up and down. The two of them took perhaps 15 seconds to agree to a price. Maren does know her Lao numbers well.

Perhaps the price was just a little high for the “going rate” in the region, but, on the other hand, this silk carries a certain provenance knowing it represents a culmination of a lifetime of skill and effort and participation. Its very manifestation harbors an element of her precious uniqueness, her vital and relevant breath. Each unique, handwoven textile does carry the spirit of its creator.

We paid the proud weaver in cash, as always. She counted the bills carefully and folded them into the waistband at the top of her own faded sinh.

The woman looked directly at Maren and tossed out another line.

Mai laughed. “She wants to now if you want to see another phaa (silk textile) she wove.”