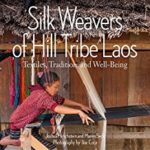 The cover of our upcoming publication, available October 1.

[This story was written to be in our up-coming publication, Silk Weavers of Hill Tribe Laos (Thrums Books, available October 1, 2017) in a section on the future of the independent silk weavers of Xam Tai in Laos’s Houaphan Province. Although the book’s focus and length led to its deletion, but it is still a tale worth telling – a tale emblematic of the rapid modernization occurring in this long-isolated region.]

We were in the NE corner of Laos, in the town of Xam Tai (well-known for its quality naturally-dyed silks), enjoying a wedding reception celebrating the union of the town’s pharmacist’s daughter to a handsome young gentleman. As in much of Lao, the pharmacist is the first medical care option, and as regular visitors to Xam Tai, both Maren and  I had asked her advice several times for treating our minor ailments. Hence the invitation.

Perhaps 250 people – a good portion of the town – were present at the outdoor event, held under temporary white tents in a large field close to the new marketplace. The dinner of water buffalo meat and stomach, fresh bamboo shoots, three types of sausage, boiled greens and sticky rice had long been eaten, and the master of ceremonies was alternating between introducing important guests and singing modern pop songs and traditional melodies on an over-amplified electric keyboard. 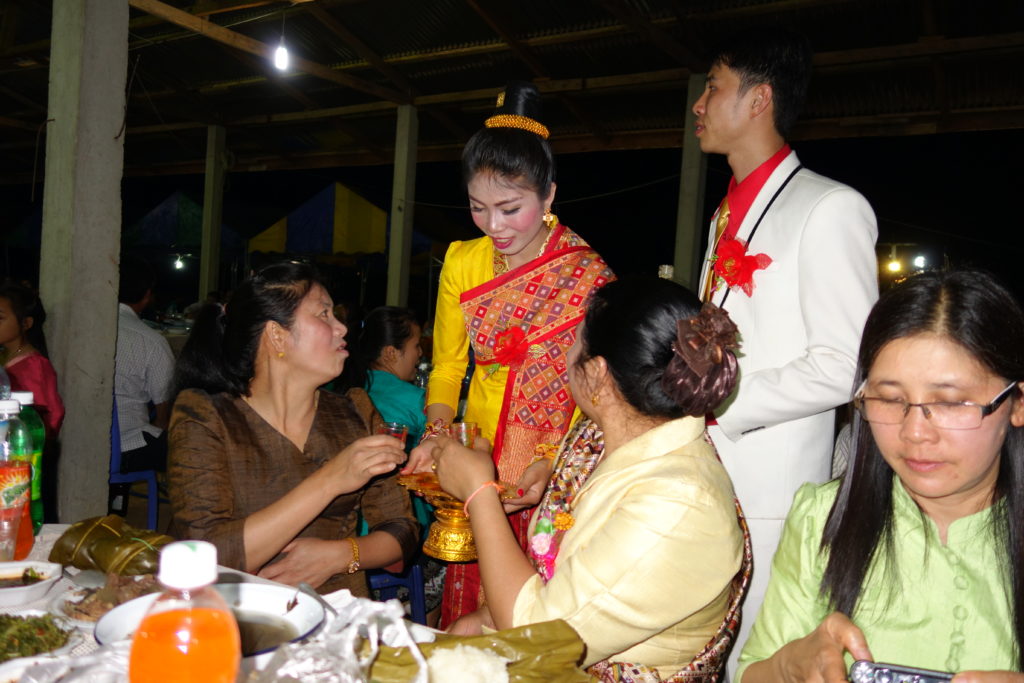 The bride and groom share a toast with two seated guests.

An abundance of ushers, friends of the young bride and groom, strolled past the tables, making sure that no one lacked food or beverage. The Beer Lao and Pepsi flowed; voices and laughs were loud. The evening air felt cool; the atmosphere was light and joyous.

Maren had been invited to dance and I could see her, a head taller than almost everyone, as she promenaded with her partner in a group circle, waving her hands first to the left, and then the right like a slow-motion hula, only with the women wearing elegant silk sinh (skirts) instead of grass skirts.

Malaithong, our translator (and good friend for nearly 10 years), nudged me on the shoulder; she shouted to be heard over the din. 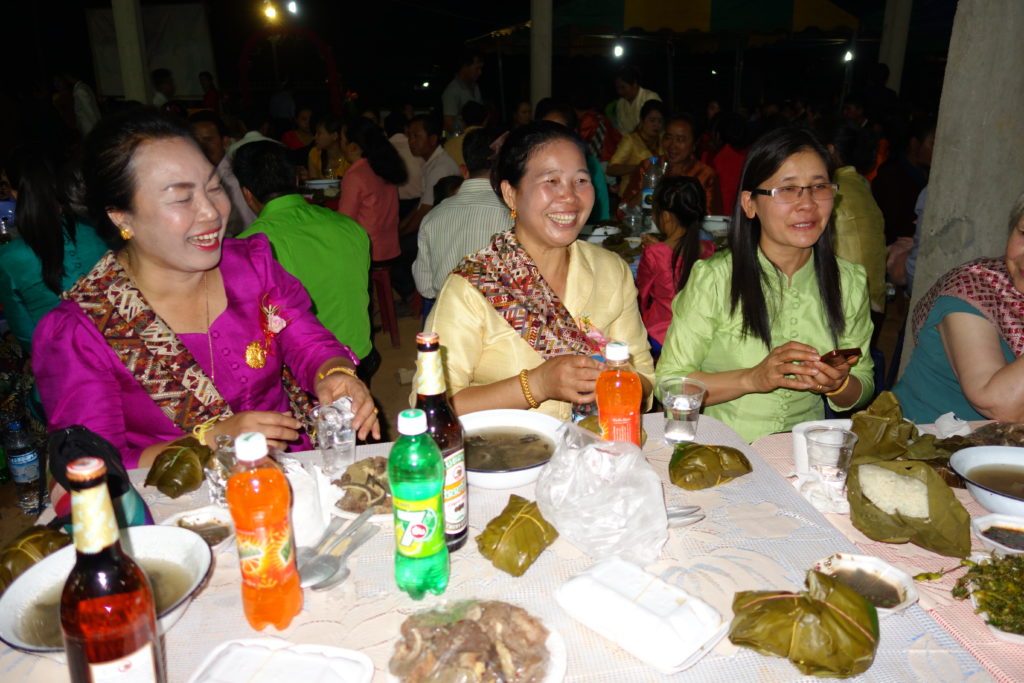 Three of our best friends in Laos: Phout, Souk, and Malaithong. All three grew up in Xam Tai as friends. Malaithong learned English and is our translator as well. They are enjoying a wedding party in this photo.

“This man coming over. Ve-ery big man. Big boss…” She paused and made sure she had my full attention. “He is a good man. Everybody likes him, and he works ve-ery, ve-ery hard.” The “ve-ery ve-ery” came out slowly and in a higher tone.

The gentleman she nodded toward sat at the next table and held his empty glass to the side, tilted towards us so that his current guest could not again refill it.

Malaithong straightened her posture. “He has many good ideas for what to do for tourism and economy in Xam Tai.” She again paused, and then she leaned close and whispered: “He is like the boss’s boss’s boss,“ and she nodded slowly.

The gentleman sat on the edge of the folding chair, swaying a bit back and forth, eyes squinting and with a wide smile of perfect teeth. His face glowed with perspiration. His shirt was untucked. But in all fairness, it was near the end of a wedding celebration. 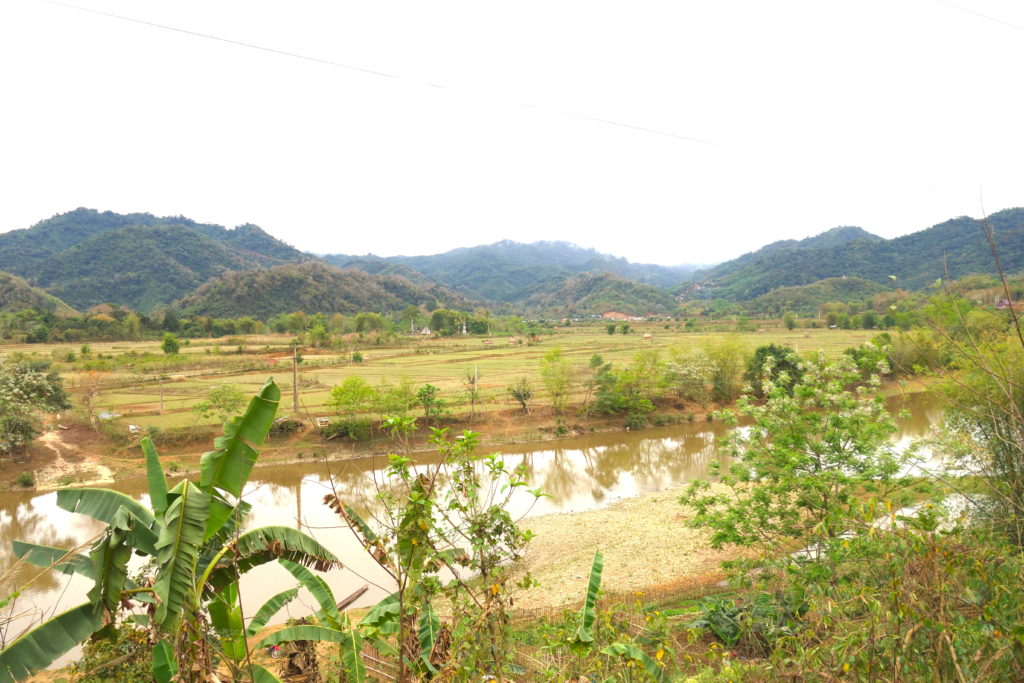 The rural Xam Tai valley looks much the same as in centuries past. Wait – are those electric lines?!

Suddenly he turned and held out his hand. “Sabaidee-ee,” (Good health), he said, and he pulled himself up from his chair and plopped himself onto another next to me. His squint and smile maintained the open easy lilt of person who had been celebrating for many hours; however, his voice was sure and direct. We pumped our hands up and down two or three times; then he set his glass on the table and brought his other hand to rest on top of our shake. His moist, warm hands held onto mine gently but firmly.

“Sabaidee,” I returned with a smile and nod.

Mailathong didn’t wait a moment. “Mr. Josh, this is Mr _____, district vice governor of Xam Tai.” She then said a few words in Lao, “Josh” being one of them. He continued to hold my hand as Malaithong spoke, his squint, smile and glow looking directly into my eyes.

“I am…uh… so hap-py to…uh… to meet you, Mr. Josh,” he said in deliberate, careful English. He had to nearly yell to be heard over the pounding keyboards and other nearby conversations. His English was thick and slow-paced, but, with a bit of focus, quite clear. Malaithong reached for an open bottle of Beer Lao and filled our short glasses. 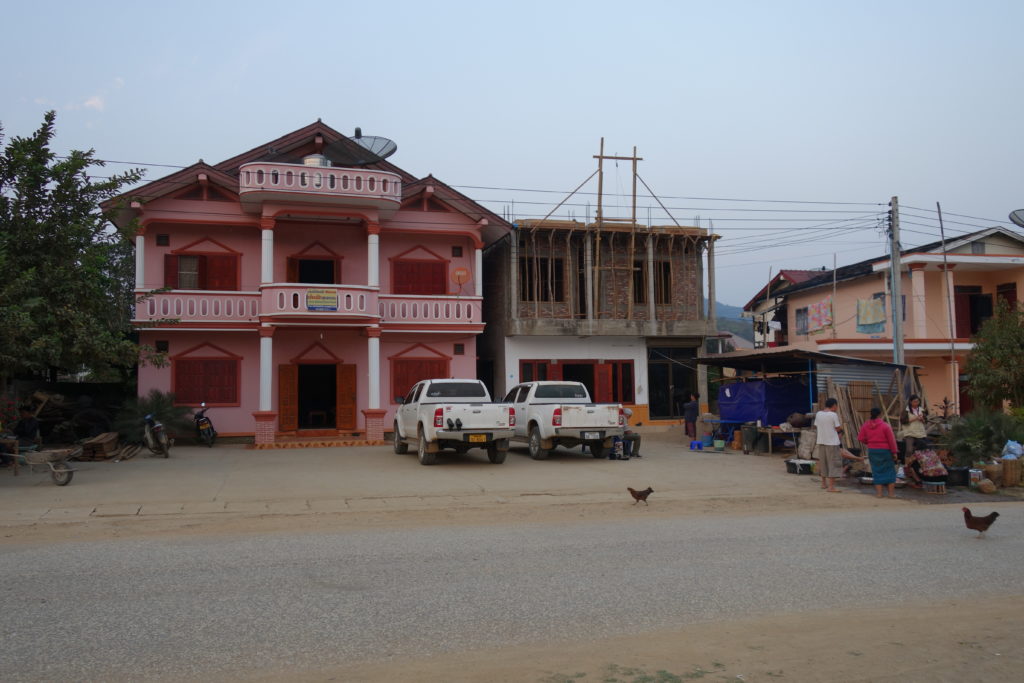 Modern guesthouses are a recent development in Xam Tai.

He held up his beer with a warm smile, and we each drained our share. His hand returned to the top of our handshake. He then said some more words to me, which I could not decipher in the din, but I continued to shake his pumping hands and nod. If nothing else, I thought, we can share squinty eyes, crooked smiles, and radiant complexions.

“I … uh … I show you,” he said brightly, as if having a sudden epiphany. Removing his moist right hand from our shake he reached into his shirt pocket for his iPhone. “I am engineer,” he said as he tried to open an application with the same hand that held the phone.

“Very good,” I replied. “An engineer.” Part of me wished to be rescued from the conversation. Trying to follow an engineering-themed thread led by a thick-accented celebrator in the cacophony of a Lao wedding was, perhaps, more culturally immersed than I particularly wished to be at that moment. 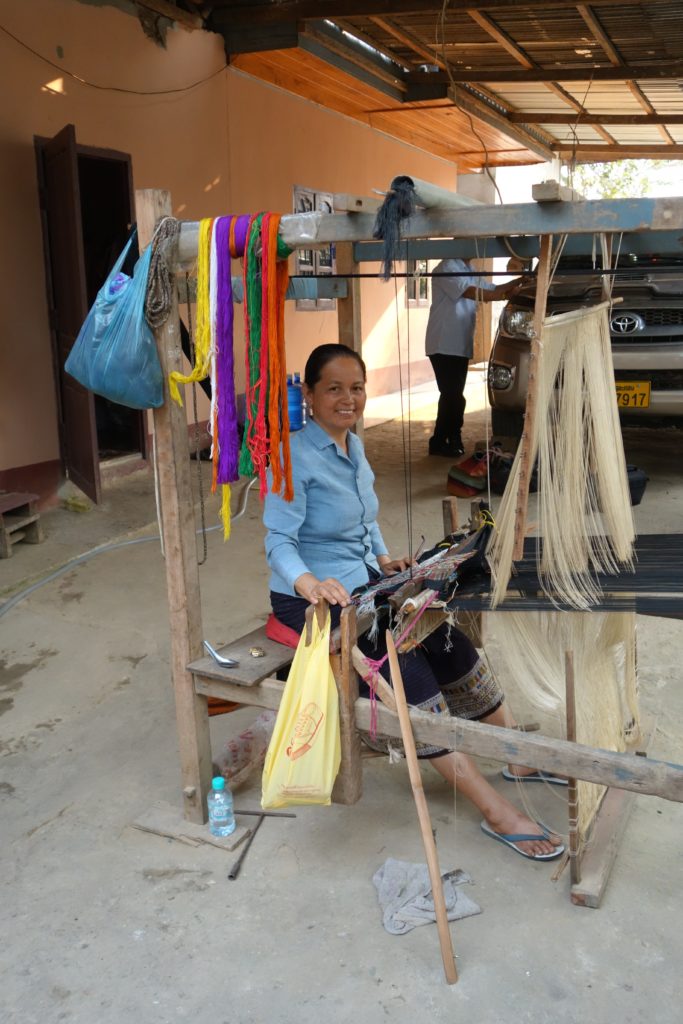 Weaving provides a solid income for the majority of families in the region.

The vice governor sat up squarely, let go of my hand and moved his fingers quickly on the phone. “I want … uh … to show you…” and his words dropped off as he poked at his phone. His eyes opened wider and his sway stopped. “I show you … uh … idea. My idea.” I laughed for no reason, and glanced at Malaithong. She was nodding with her eyebrows raised, urging that I share my full attention.

“Here,” he said finally. “This is … uh … what I think … for Xam Tai.” On the iPhone’s screen spun a shape in slow motion that looked like the blueprint of a house. The spinning house grew larger and all I could think of was Dorothy’s house in the Wizard of Oz as it spun downward and landed on the Wicked Witch. He continued with more words, but I couldn’t make them out in the noise.

“For Xam Tai…” he said emphatically, pointing at the screen. “I think … uh … like engineer … I think to help Xam Tai to make … uh … for park for Xam Tai.” The iPhone’s vision stopped spinning, and then the short demonstration on the iPhone started to replay itself. 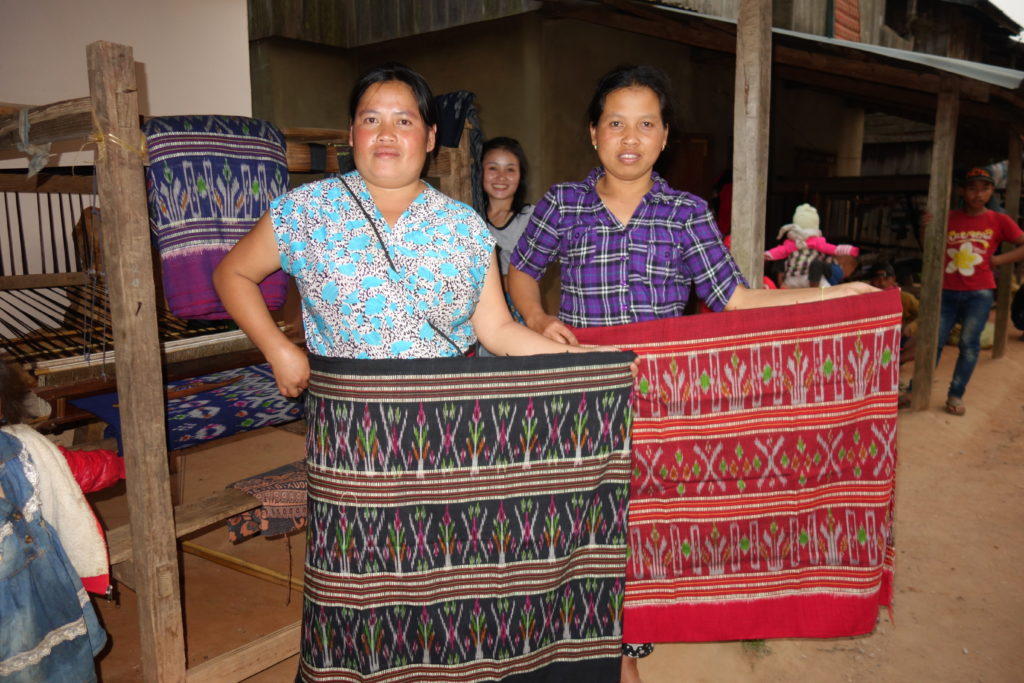 I looked to Malaithong, who had just refilled the governor’s and my glass. She smiled and said loudly: “Mr. ____ is a ve-rry smart man. He wants a new park in Xam Tai, where the old market used to be. You know, across from the new bank.” I nodded. Our family had loved that old, low-ceilinged, dilapidated market, but its recent replacement certainly was cleaner, safer, and had room for expansion.

The vice governor watching me intently while Malaithong continued: “He has plans to build a central park for Xam Tai – a nice place for tourists and business. Like in the big city – only in Xam Tai it would be smaller, of course.”

I looked again at the iPhone, and I suddenly understood the graphic. Mr. ____ had programmed a phone app to show a 3-dimensional layout of a park-plan he had developed. The graphic on the phone was a spinning view of the imagined center park, as if the viewer were a slow-moving bird coming toward it in a narrowing circle. Yes – there was the open field, and a pavilion-like building. The center-point of the park layout spun in closer and the viewer finally landed in the park next to the handsome building – only to be jolted back to the beginning of the animated loop. 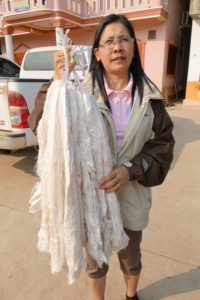 Malaithong with an armload of freshly processed silk. The silk worms are raised locally.

Malaithong explained that the vice governor wanted to make Xam Tai an important town and increase tourism and help promote the local silk weavers. “The center building could have a tourist office,” Malaithong cheered. “For explaining the weaving,”

I looked up at the vice governor. He sat steadily, straight-faced, almost solemn now. I reached out with my left hand and gently clenched his right shoulder; with my right hand, I presented a confident thumbs-up. “What an excellent idea,” I said, and the vice governor burst into a wide smile. I nodded largely, up and down, assuming that a bigger “yes” was a better “yes.”   He started a gentle nod in the rhythm of my nod.

Maren just then returned from the dance floor, and, after introductions, we showed Maren the animation. Maren watched intently for a moment, and then, after a brief explanation, her face lit up. “That would be wonderful!”

She then insisted that the vice governor, now sober as a judge, show and explain to her the details of his presentation.

Malaithong sat and watched, a small smile on her face. As they say, all politics is local.