Maren and I have just returned from an amazing set of adventures in both the far NW and the remote NE of Laos. We found ourselves often in villages where the residents had never met white-skinned people (although they’d of course seen such on TV and in photos), and we were consistently impressed with the textile arts and the open welcome of the people. As we prefer, we nearly always traveled with a local translator helping us facilitate the great pleasure of sharing conversation (and meals!) with the locals. 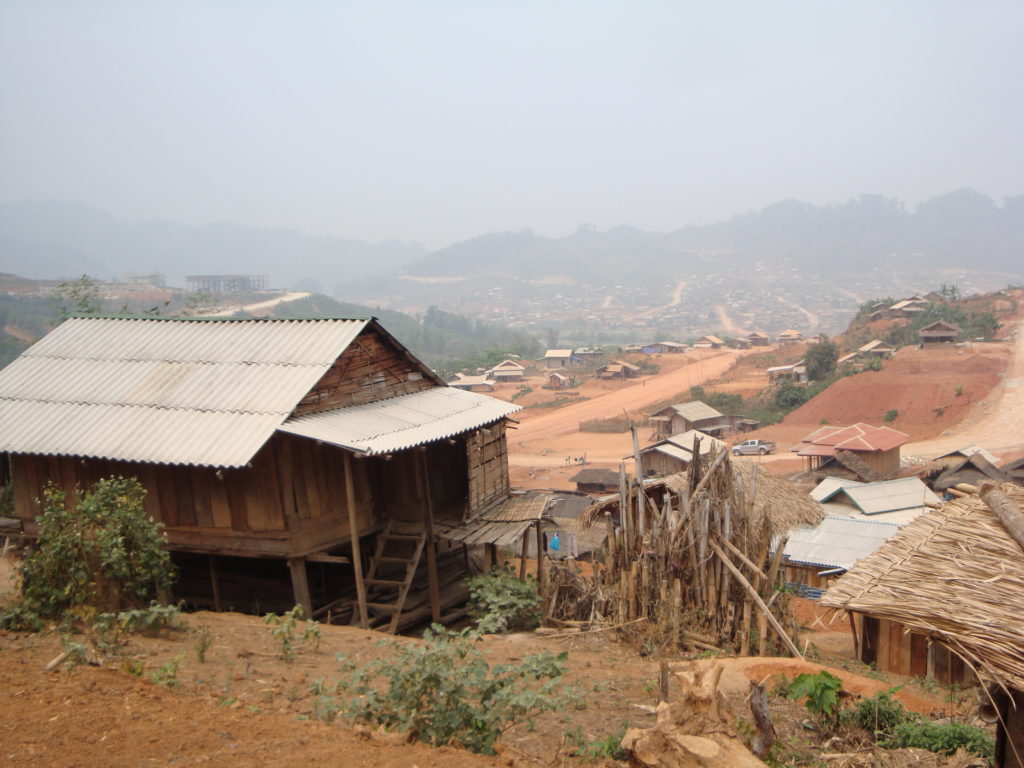 The new district capital of Meung Kuan: from a sleepy village of 60 thatched-roof homes to a modern platted city in 3 years, complete with a new hospital, secondary schools, covered marketplace, sealed and well-drained roads and several new government buildings. 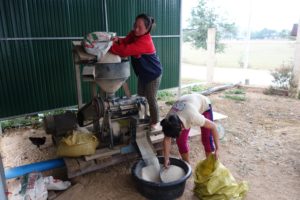 Efficient gas-powered rice threshing machines are available in all villages.

Our largest take-away from this trip is the evidence of the incredibly rapid pace of development in even the most difficult to reach places. Graded roads, electricity, and access to education and knowledge is flowing into these remote regions at an unprecedented pace, and every year we witness vast changes in their lives.

While we recognize that some things are lost in this modernization, such as traditional animist beliefs and a required devotion to subsistence farming and cloth-making, we recognize that the vast majority of those experiencing this new-found modernity are grateful and eager to participate in a more global world. More specifically, the advent of regular electricity has brought phones (wired technology is completely being bypassed, and even the most remote villages can have excellent reception and wi-fi), washing machines (saving people several hours of grueling work each week), the light bulb (extending time to weave, study and otherwise earn a living), refrigerators (changing food preparation and storage), and allowing the introduction of such luxuries as blenders, television and karaoke (ok, I could do without that one!), electric motorcycles, fans and more. 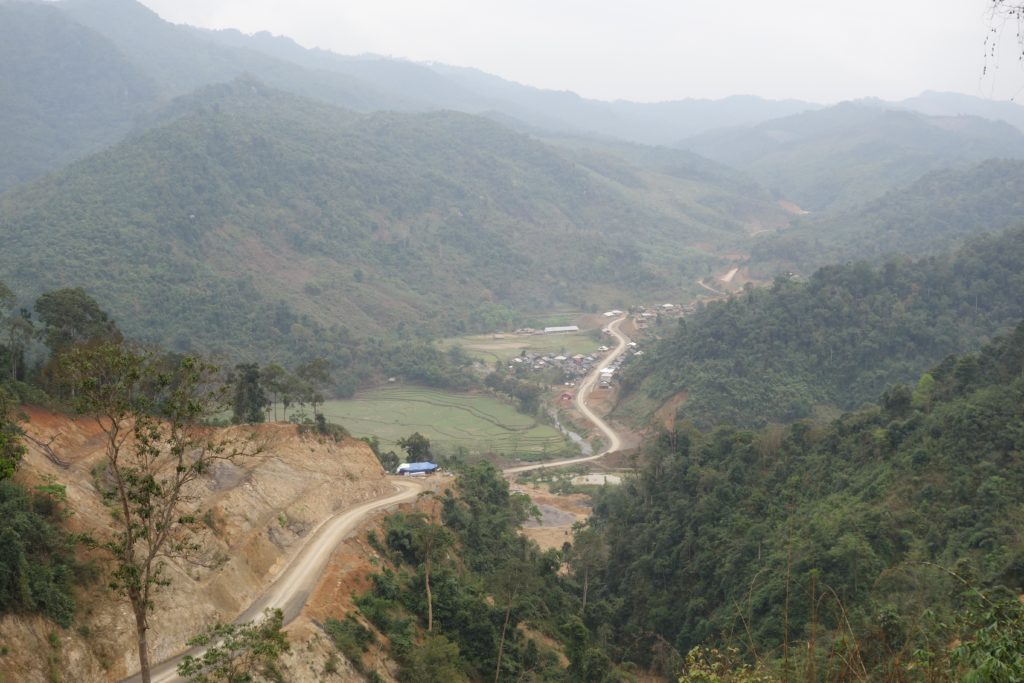 We had a long chat with Mai, an 88 year old weaver in Meung Kuan in Laos, who is ecstatic that her children, grandchildren and great-grandchildren now have access to nationalized schools and possible college, that the market is full of a variety of excellent fresh and packaged foods, that people can travel to other towns back quickly (so she can visit with her businessman son who lives in Laos’ capital), and that hospital care is accessible. And to note – she was also very grateful that all 11 of her granddaughters know how to weave on a traditional loom and thus could earn a respectable middle-class income using their culture’s traditional skills (sand selling their textiles in an urban marketplace. Such conversations give me greater optimism about the future. 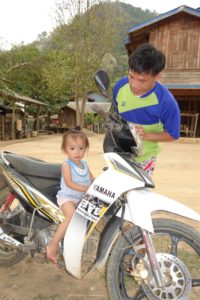 Motorcycles are the preferred method of transportation for anyone within reach of a road.

As developing nations such as Laos, Vietnam and rural China gain access to information and, their voices can be better heard and basic needs met. We cannot help but notice that the vast majority of the diverse peoples we meet are kind and generous, and they are eager to connect not just with the tools of modernity, but with the hearts of the people of the world. The family unit is still strong, and mutual respect and cooperation is treasured.

While we can find myself sometimes caught up in the arguments of politics, such ventures reminds us that what is most vital for our daily lives is found in our personal relationships, the respect we share with and for others, and the gratefulness we should treasure for having food on the table, the comfort of a warm home, and the affection of family and friends. 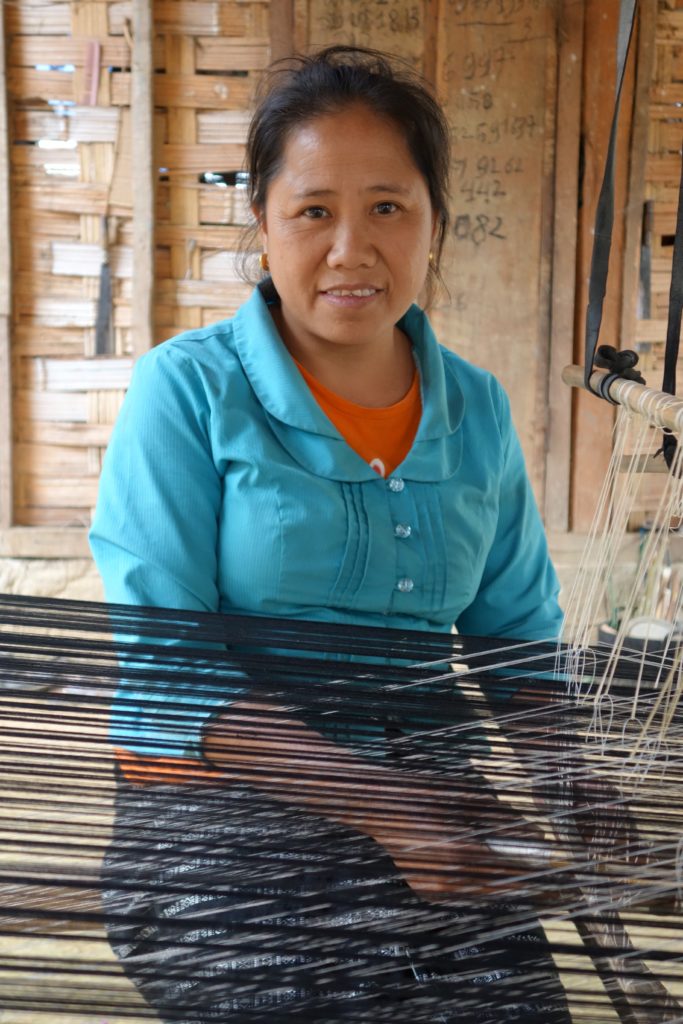 This weaver, before meeting us, had never seen white people outside of television and other media. While still very remote, the region is modernizing at rapid pace.

Our schedule is now set for the 2017 year (visit www.hilltribeart.com/events), and soon we will be crowing more loudly about our upcoming book (available this Fall) published through Thrums Books: Silk Weavers of Hilltribe Laos. 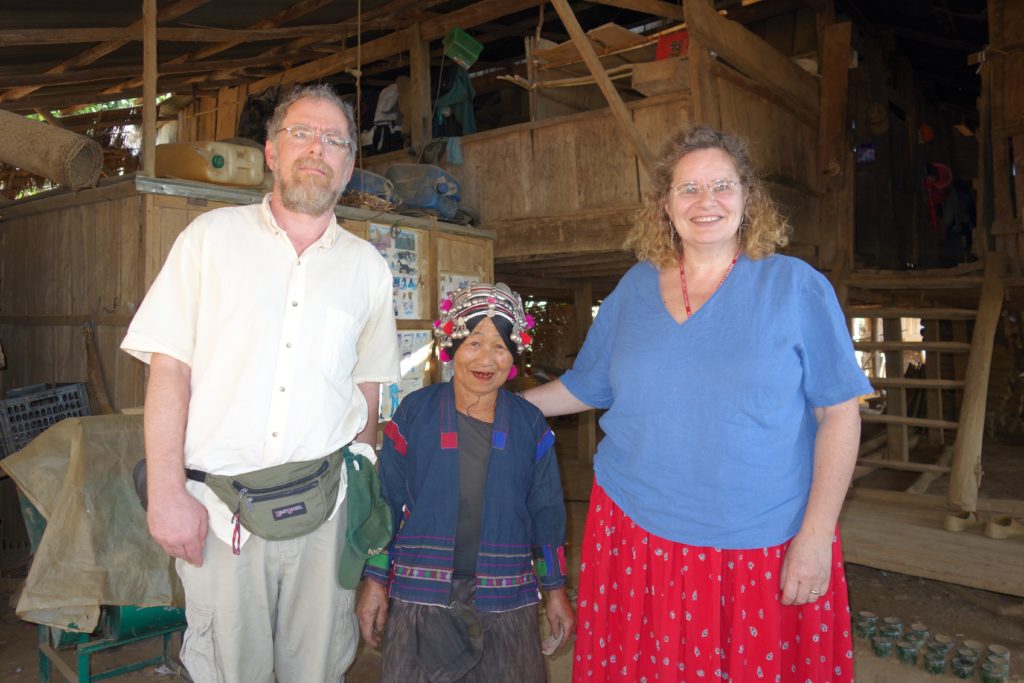 Maren and Josh share some time with a 72 yea0-old Akha elder in the far NW Laos.  The red of her lips is from chewing betel, a jungle nut.  Her clothing is made of locally-raised, handspan, hand-woven cotton. Her head-dress  is of silver.