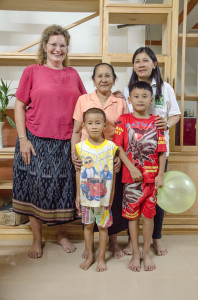 Maren on the right, Mai (our Houaphon translator, guide, and very dear friend) is on the right, Mai’s mother is middle. Mai’s nephew and son, Bingo (no, not Batman), are in the front.  We do feel like giants there sometimes….

Josh, Zall and I are sitting in our room taking a break and digesting our lunch of steamed bat (yes, again), water buffalo liver (Josh’s favorite….), green zucchini-ish veggie boiled with venison, water buffalo meat stir fried with some green onion, lots of sticky rice, chili sauce, bamboo soup left over from last night’s dinner, and more of the green zucchini-ish veggies boiled (Zall and I really like them).  So much of our social life focuses on food – preparing it, planning it, eating it.  This morning we had another smaller American-pancake breakfast for a smaller crew – pancakes, bacon, and coffee.  Delish!

Two nights ago we had the “Han-falang” – foreigner restaurant – where we made hamburgers, fries, salad, and s’mores for dessert, with appetizers of gin and tonics, brie, stilton, smoked gouda on crackers, and olives (yes – we actually hauled 24 hamburger buns).  As expected, the hamburgers were a hit (with water buffalo ground in the hand-cranked cast iron meat grinder Z and Josh hauled from home – the women have all asked for more of them – they love the grinder!).  We served them with a thin slice of onion, Heinz ketchup, French’s mustard, my pickles (yes, Josh and Z hauled them too), all on hamburger buns from home.  The potatoes we bought here and fried in oil from home – all were eaten!  The salad was cucumbers, tomatoes, green beans, and some spicy greens from the market with Italian salad dressing.  The surprising thing was that everyone ate each type of cheese, and, although it was not their favorite food, they did not react with the tastebud horror we thought they would to aged and moldy calf food.  What did surprise us is that only about half of the people liked the G&Ts.  Most switched happily to Beer Lao.  One of the men helped make s’more sticks from a freshly cut large bamboo, split into stick widths, shaved to eliminate splinters, then carved into points.  I couldn’t believe it – no marshmallows burned! 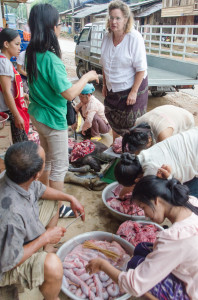 The meat for our American hamburger meal could not have been fresher. 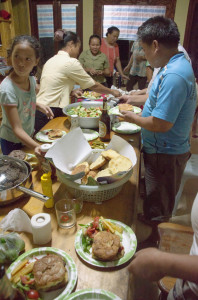 Hamburgers and fries with the works, including paper plates. 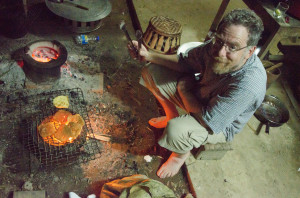 We’ve been fed some amazingly good meals – fresh catfish from the river, bamboo soup with the bamboo cut that morning from Phout’s garden – a huge shoot from timber bamboo that was incredibly sweet, mild, and delicious.  Chicken, of course, lots of fresh greens, a tiny pea-sized fruit that is so bitter that it fills your entire head and the taste lasts for at least 10 minutes – it’s supposed to be good for health and blood sugar – and many other things we don’t have at home.  So far we’ve sampled no bugs and no extra MSG in our honor, although we did get another round of “poop soup” – water buffalo stomach, intestines, liver, meat, cooked in water and the contents from a 6” section of intestine; at least it was all very fresh, as we had purchased it along the side of the road on the way to our favorite town in Houaphon Province, having noted a fresh butchering under way.  Somehow, the intestine contents don’t strike me as “fresh”, regardless of age…. 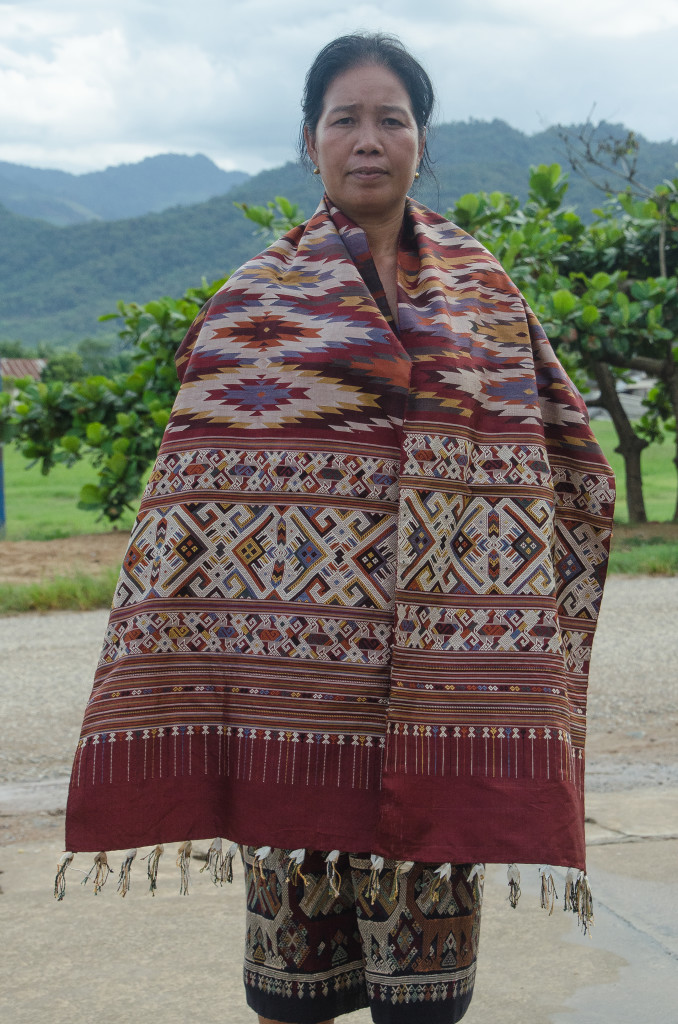 Souk shows off one of her silk masterpieces from this year. Just when you think you can’t get more intricate, precise, or attuned to the art….

On a business note, seriously gorgeous textiles in abundance are all around.  We’ve managed to skim the best off of the top.  Some have color combinations that don’t work, hang “banana” (one selvage is too short and it hangs off to one side) or “hammock” ( the selvages are both too tight and the middle sags), or there are too many flaws or “imperfect” weaving – in other words, absolutely exquisite, but there are better.  We pick the best we can find across the spectrum, though favoring the little girl’s weaving whenever possible (age 9 and weaving unbelievable textiles!)  The theme this year seems to be center diamond patterns, though some new and unusual designs have emerged too. 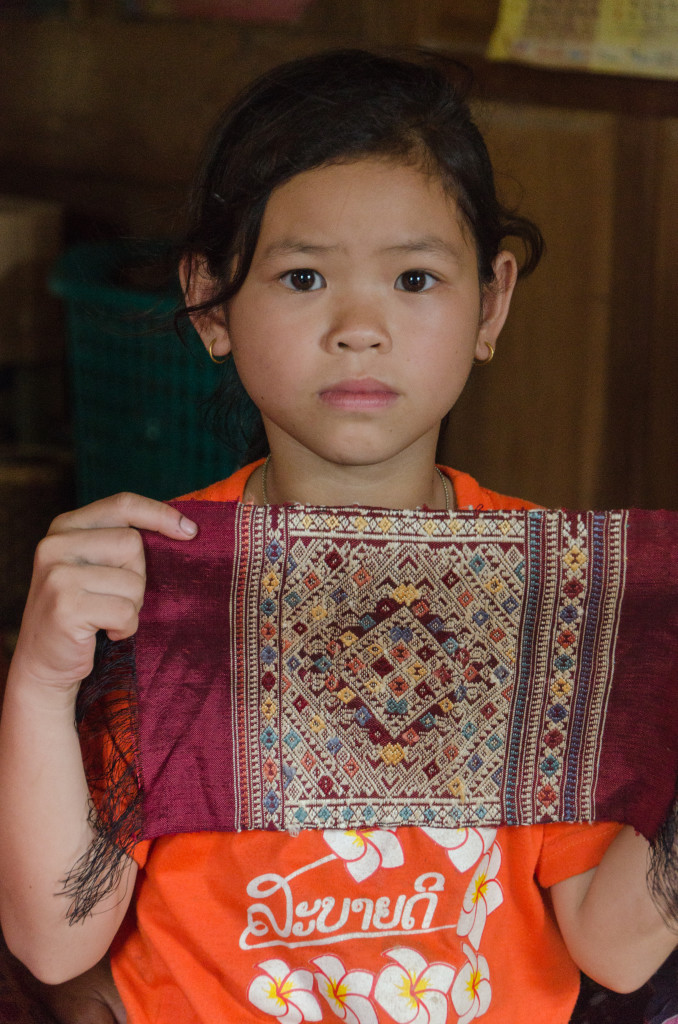 A nine year old holds up the small piece she wove, and we purchased.

We spent 7 hours straight at Phout’s house yesterday buying textiles.  All of the women in the village joined us in the house, upstairs above the looms and farming tools.  The house is made of wood with teak floors, support beams, and walls.  The walls are covered with posters from calendars of beautiful Laos models – women – with coy looks, wearing sinh (Laos skirts), and pabiang (shoulder cloths).  About 30 women were in the house, with two fans going, a couple of windows open, and the temperature must have been 95 degrees.  We were sweating gallons, and Phout gave me a huge bath-sized towel to wipe my brow so I didn’t sweat on the textiles.  Whew!  Zall was incredibly patient, sitting, sweating, and waiting for us to need his photography services.  What a great guy! 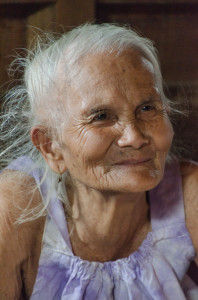 A very elderly weaver in Houaphon Province at Phout’s house. She sold us a piece she had woven in her youth. 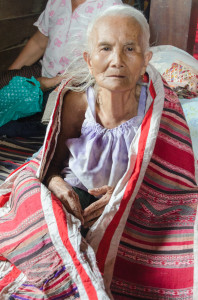 The elderly woman modeling the mosquito-net border which she wove some 60 years ago.

Tonight we have been invited to the Vice Governor’s house for dinner and games of Petanque (bocci-ball) – most often played as a drinking game, leading to great hilarity.  He is also going to be accompanying us to a neighboring silk-raising village tomorrow, and, it turns out, most of our friends are going too, leading to a caravan of 3 cars descending on the tiny village at once.  I think we’ll double the population with our arrival!  Mai, our friend and translator, is mightily impressed with the amount of time the Vice Governor is spending in our presence – he seems to have learned the amount we drop in the village each year and is investigating more himself.  He has 4 daughters, and is working (in all jest) to get Ari and Zall to marry into his family!

One thing we have learned this trip is that we are an excuse for all of our friends, including the V. Gov., to get together just to chat, relax, and party.  Apparently, they are so busy with their daily lives and work that they don’t often make the time to get together, despite how it appears when we are here.  So, our visits are not just money makers for them, but also their own social occasions plus the opportunity to hang out with foreigners and have an American meal.  Quite the set of events. 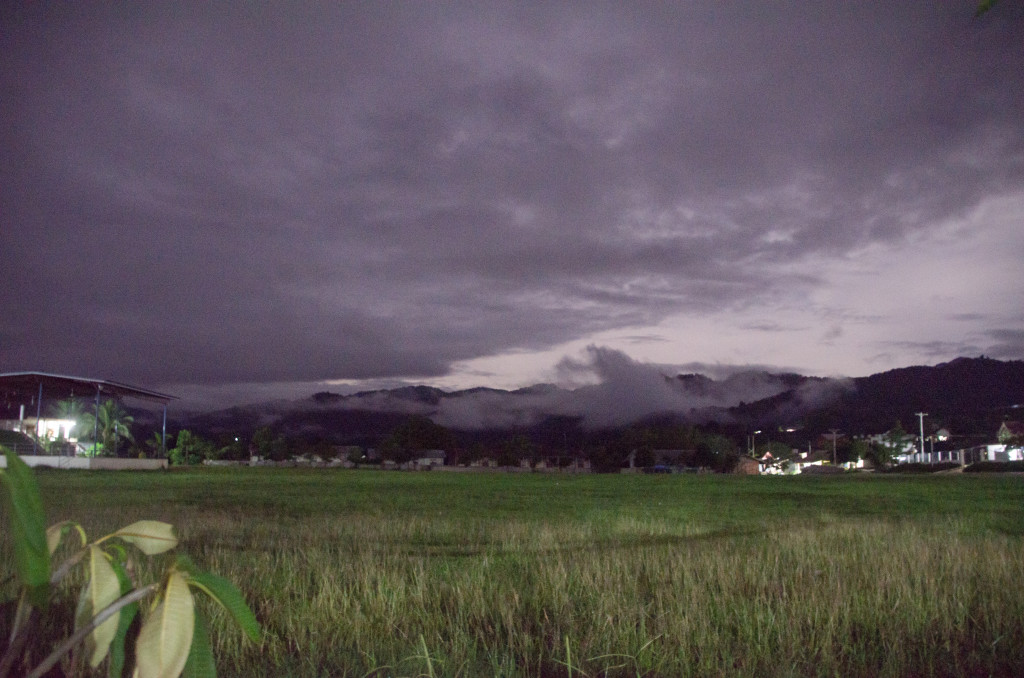 A monsoon storm threatens in the late afternoon.

Souk and Phout have been working with me to discuss creation of a dye chart.  They are going to collect dye-stuff and threads for our next visit, and we’ll spend a couple of days then creating dye charts for each of us to explain the natural dyes used in this region.  Looking forward to it!