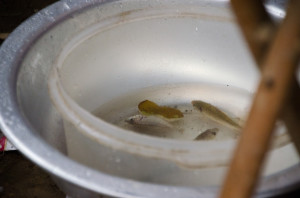 OK – we have attained a new culinary height (or depth) that will make many cringe – sorry in advance for PETA fans.  Yesterday we visited a village celebrating the “fish in the rice fields” day, a day, post rice planting, when the plants are well rooted, when the fields are drained of water and the villagers scavenge the fields for small fish that are left flopping in the mud.  The fish are a central part of the fish day celebration, accompanying many shots of lao-lao (distilled rice “whiskey”), grilled river fish, and many other local delights.  These small fish are kept alive in bowls of water, then, individually, placed into  bowl of spicy vegetables and we’re not quite sure what else, poked around in the spicy mixture (many flop their way out during this ignominy) and then, grasped between chopsticks and with a splop of spicy food, popped into ones mouth alive and flipping for a tasty sushi treat.  Zall declined, but Josh and I each managed a fish, then Josh continued to eat 2 more!  A new height in western ideas of grossness, but, in order to be part of the festival, this is what needed to be done!  Try everything once, is our travel motto. 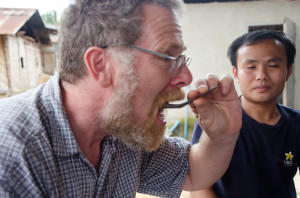 Josh with a “squiggler.” Lots of chili, quick chew, and down. Easy as pie. 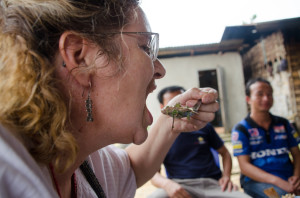 Sushi – bottoms up! A chaser of a shot of strong lao-lao fortified us!

This culinary delight followed our truly delightful time in Houaphon Province.  We also ended up going to the silk-raising village with the District Vice Governor, and eating huge amounts of fish – grilled, in soup, and, delightfully, raw dipped in soy sauce and wasabi!  We had never seen wasabi before in Laos, but, apparently, it is made in Thailand, and is the same brand we use in the states (at least the same color packaging, though ours is usually in English).  That fresh, raw fish was incredible – we saw the fish swimming, then it was sliced and on a plate – incredibly delicious. 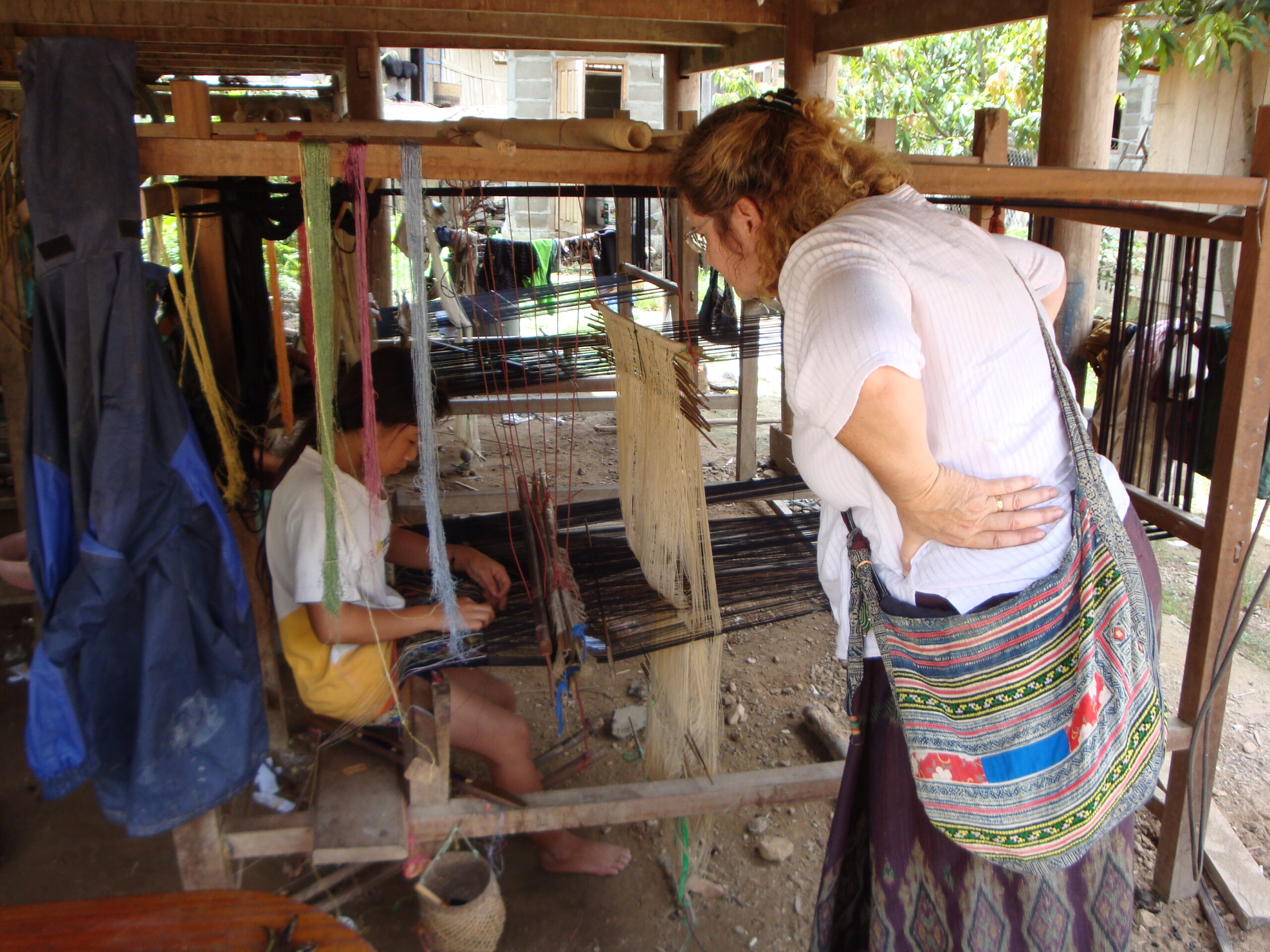 Maren leans in to watch; weaving can be mesmerizing!

Josh and I wandered around the village a bit, and Josh videotaped several women weaving intricately patterned sinh (skirt fabric) using the usual discontinuous supplemental weft (brocade) method of weaving to create patterns.  We ended up buying one sinh from a woman who raised the silkworms, reeled the silk, made the natural dyes, and then wove the fabric.  Quite amazing.  Josh videoed young girls weaving simpler patterns, women weaving more complex patterns, including a skirt fabric with supplemental warp, and an older lady with goiters weaving a skirt border with thicker pattern strings to accommodate her arthritic fingers – boy did she beat back that reed hard!  Quite the tough lady, and she seemed pleased with the attention too! 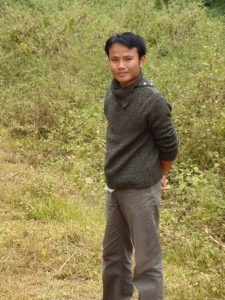 Our friend, guide, and translator Kaiphet.

We returned to Xam Neau for a day, shipped our accumulated textiles via bus to our shipper in Vientiane (safe as can be), and then the three of us set off for the far northern part of Houaphan Province to see the sights and to explore the textiles.  We went with our first guide from 2006 , Kaiphet, who’s baby just turned one yesterday (we were Kaiphet’s first-ever clients as well, and we have remained good friends over the years).  We stopped to see an elderly Hmong man who was one of our first contacts on that road 8 years ago, who was a blacksmith.  We brought back photos of him (taken on our 2008 trip), and, amazingly, he was still there!  He is now quite very elderly, but remembered us, and requested that we come back to visit him again.  Really delightful. 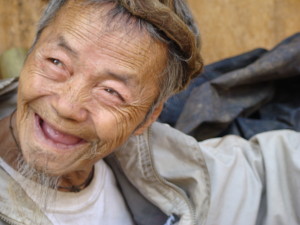 An elderly Hmong blacksmith who captured our attention in 2006. This photo is from 2008. 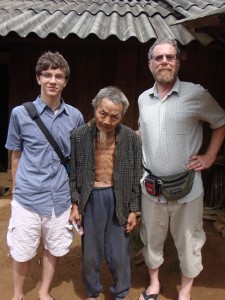 Zall, the now very elderly Hmong blacksmith, and Josh in 2014. The gentleman is holding a picture of himself with our boys from many years ago.

Later, we stopped at another Hmong village where Kaiphet said they did painting on cloth – turns out he meant batik, but didn’t know the word in English.  We went to a house in the village and had a long and instructive conversation with a woman who does batik on hemp in the traditional Black Hmong way.  She said that only the Black Hmong still use hemp – something we had also noticed in Vietnam – why, we don’t know.  She proceeded to take our her batik tools and show us how the patterns were drawn, the direction in which the wax “pens” were moved, how she used a small piece of bamboo to draw the lines straight and evenly, and was totally delightful and pleased that we were relatively educated on the process.  We bought a used skirt from her, and she gave us a handful of raw hemp ready for splicing and one of her batik tools to use as display items for our Gallery.  I had to argue with her a bit about giving us the tool, but her son said she had another one just like it, and she wanted us to have it.  I did insist on at least making a small extra contribution so the family could have a special dinner that night. 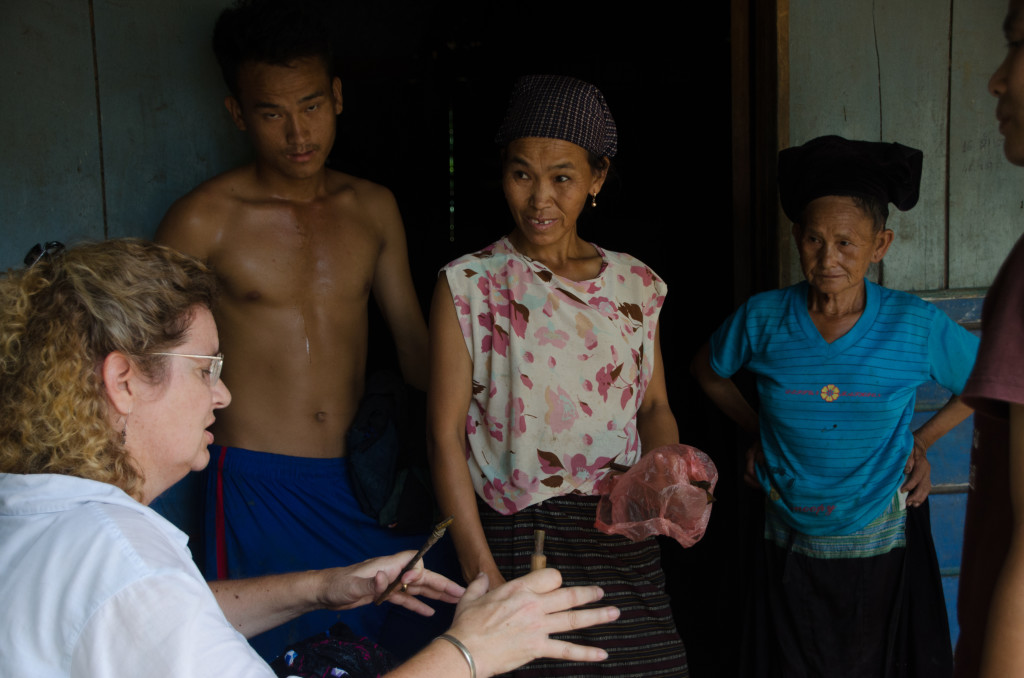 Maren asks a lot of questions and learns traditional batik-technique from this Hmong woman. 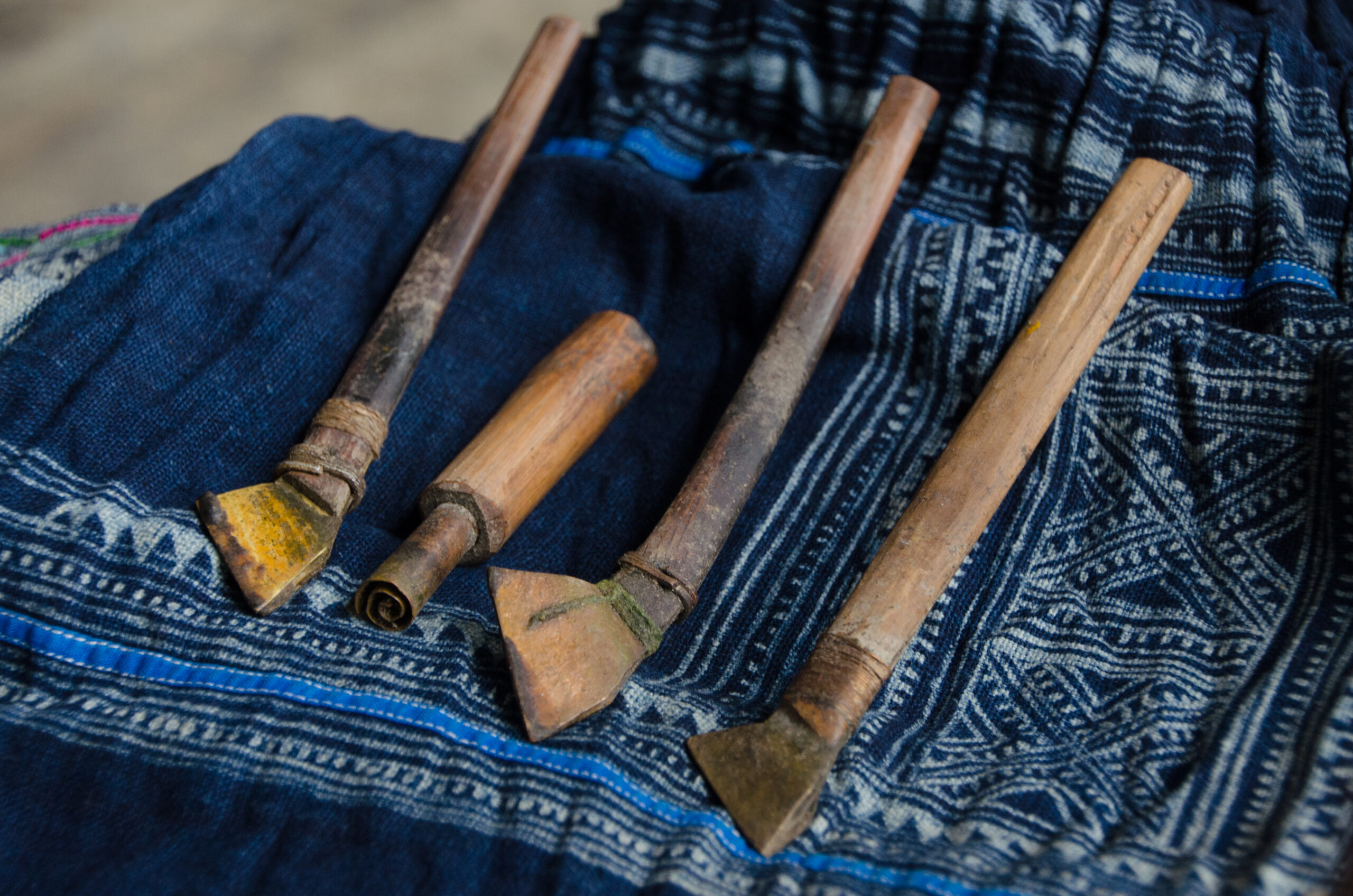 The landscape going up to the northern reaches was beautiful, though a Chinese company is doing mining on a wide section of the hills and the Laos government is putting in a dam, so there were lots of scars on portions of the landscape.  Otherwise, we drove through Tai Dam (Black Tai), Tai Daeng (Red Tai), Red Dzao (Yao), Hmong, and other villages on the way.  We spent the night in Muong Et after dinner in a Karaoke bar – loud and hot, but delicious and spicy!  Drove back again, stopping in different towns, mostly Dzao.  We visited several older Dzao lady’s houses, and bought some choice hand-made clothing and bags.  Zall was having a fabulous time taking photos of the elders’ faces! 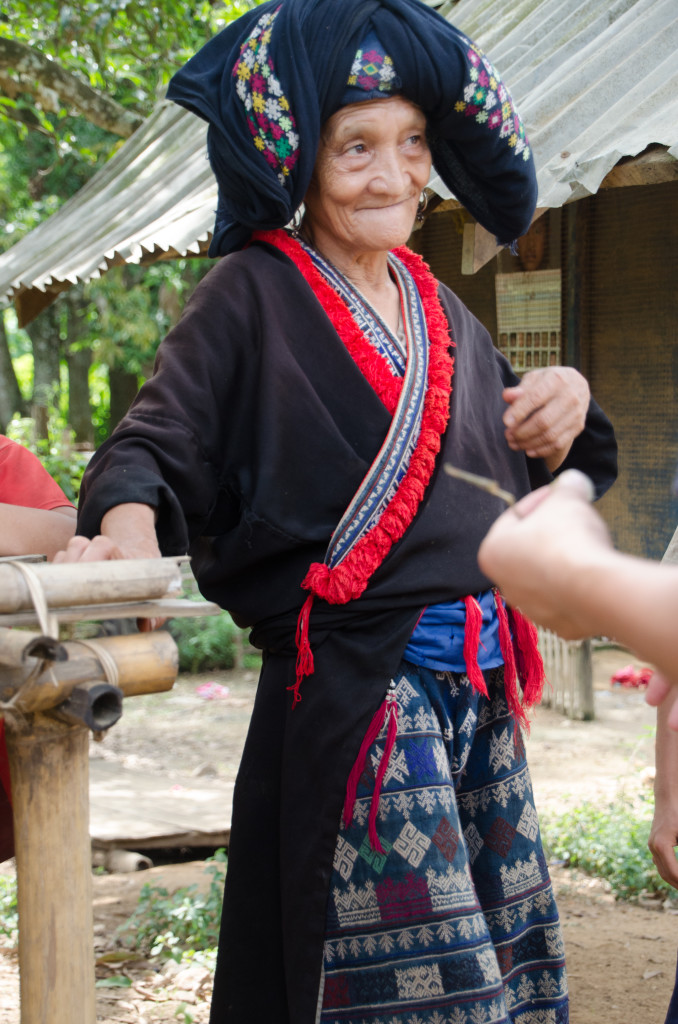 An Red Dzao elder models an outfit – long-tailed jacket, pants and belt –  she recently made. She happily sold it to us.

Back in Xam Neua, we were invited to Kaiphet’s home for dinner and our first chance to meet his son – a cutie!  The whole family looks healthy, cheerful, and well.  I think the addition of another woman to help around the house (Kaiphet’s wife), and the grandson, have added a great deal of brightness to the whole family. 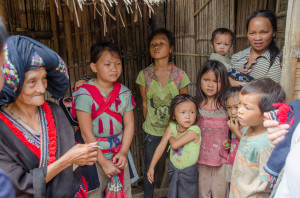 Our stop to meet the Dzao elder drew quite a crowd.

Today we packed our gear and did our last market wander.  Tomorrow we’re off to Vietnam, and a (hopefully) relaxing time at the beaches of Sam Son near Thanh Hoa – not reputed to be the best beach in Vietnam, but it is both convenient and a draw for Vietnamese, but not Western, tourists.  Then to Hanoi to finish labeling our materials for shipping, then home.

Laos is about over, and our friends are already saying they miss us and want us to come back as soon as possible. And Josh and I are already laying plans for doing just that!