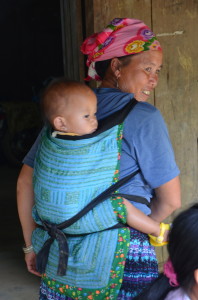 A woman shows off her baby – and beautifully embroidered baby-carrier made of local hemp and cotton. The textiles coloring and patterns ndicate the woman’s ethnicity is of the “Blue kong” people.

I am currently sitting at a restaurant in Phonsavan, XIeng Khuang Province, Laos, nursing a wonderfully cold Beer Lao.  In Vietnam and Laos, so far, it has been hotter’n hell – 84.5 degrees at the coolest in Luang Prabang and Vientiane, Laos, at night!  High humidity increased the discomfort.  However, nothing beats being here.

Started in Hanoi – three shops and the hotel, the Bia Hoi (“fresh beer”) seller, as well as the used bookstore owner, all greeted me back to town.  Then off via train to Lao Cai Province in the north, where I spent most of my time with Thi, my Black Hmong friend, sister of our first guide, Sho, as well as all of their family, including sisters Sa, Zu, Bam, Dang, mother Tai, and Thi’s husband,Trang, the traditional Hmong jewelry maker who, once again, came through with beautiful earrings and necklaces.  The major coup of the whole Lao Cai trip was obtaining an older style Hmong hemp weaving loom for display in our Gallery.  Thi managed to find one no longer being used, by her uncle’s family, took the loom “guts” to a woman who had sufficient prepared hemp to warp the loom, who then brought it back and assembled it on the loom frame (two legs and two arms, with one piece missing that Thi’s husband Trang replaced by carving a tree branch with his machete to fit the loom frame in time to assemble).  It was assembled in front of Thi’s sister Chai’s husband’s coffee shop with at least 6 Hmong women and several tourists watching. 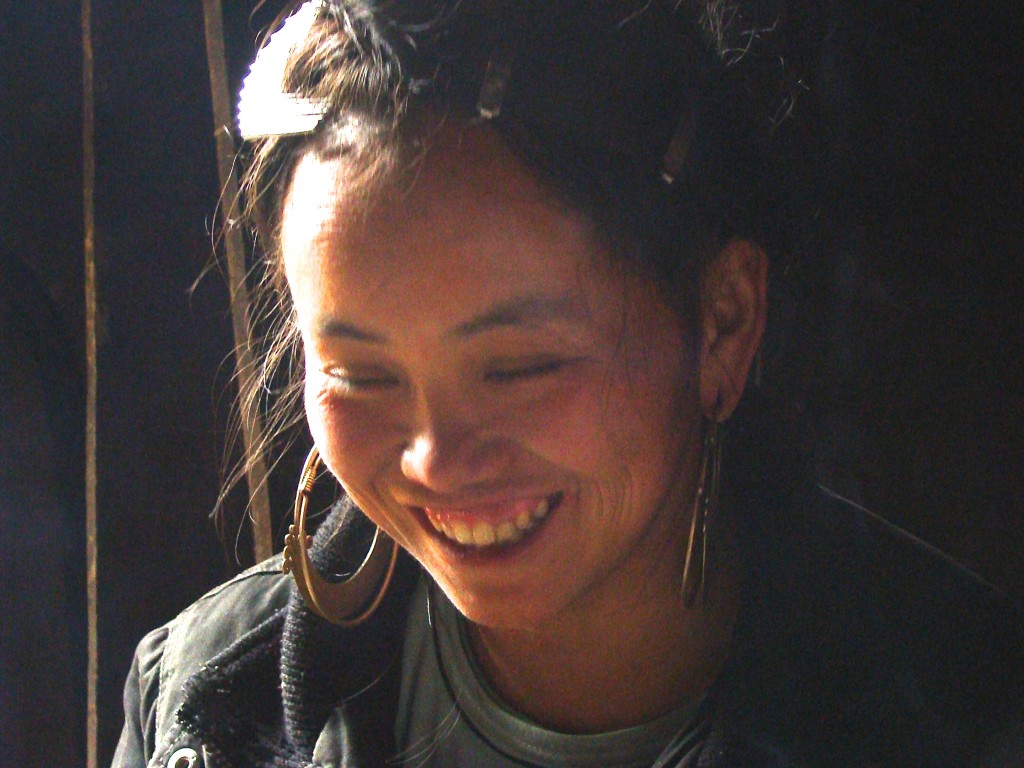 The younger Hmong women had never woven using this older loom, and were fascinated by the process.  The older women jumped in and helped assemble it, resulting in the woman who warped the loom weaving about 10” of hemp for me.  I got to weave about 6 rows before the rain came dumping down and we had to cover the loom so the hemp was not ruined for weaving from the rain.  Quite funny.  I sat on two beer crates, upside down, with several women “helping” me weave – yeah, I had a hard time coordinating the backstrap tension, the one heddle controlled by one foot, and the shuttle all at the same time, but, I have to admit, 6 hands helping me weave was a bit much!  Great fun.  Got it disassembled and down to the train back to Hanoi where I had to purchase another bunk on the night train to get the loom frame and the 4 bags of purchased gear back to Hanoi for shipping. 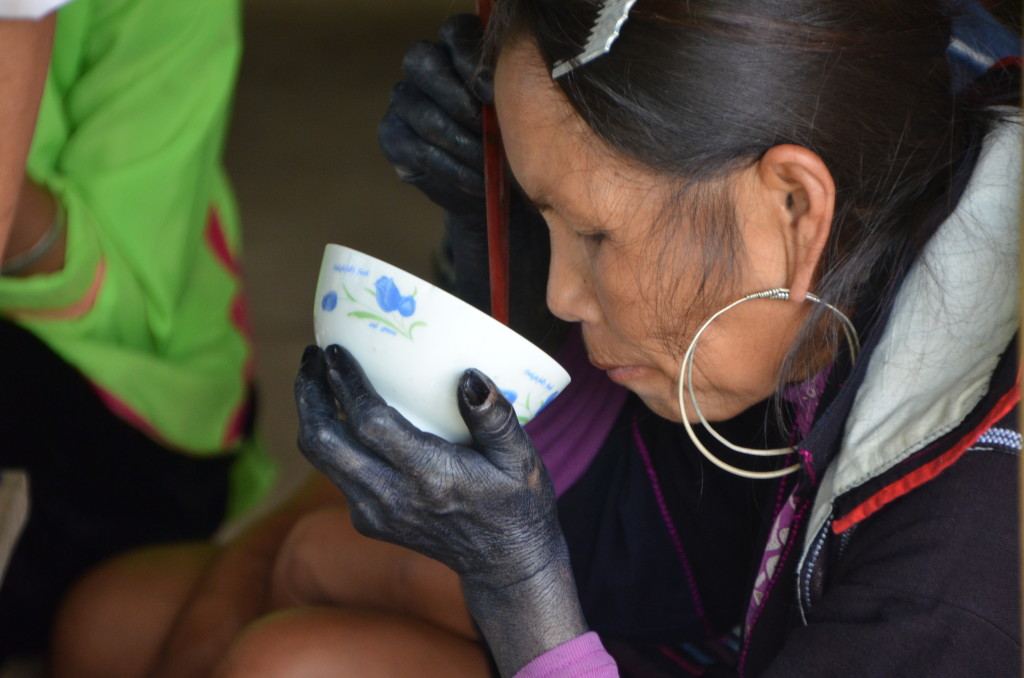 A Black Hmong woman catches a meal in between shifts of dyeing local hemp with indigo.

Laos, where I’ve been for the last few days, has been a whole different experience.  In Vientiane, I did a bit of hunting and located some good used masks from the Ta Oi people.  Then I was invited to my friend Phout’s (one of the natural dyers from Houaphan Province) daughter’s house for dinner, to meet Phout’s first grand-baby – 2 month old Nui.  Phout’s daughter’s husband, Nan, was a fabulous translator, and it is really nice to have more friends in Laos. 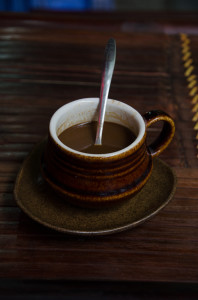 Flew to Luang Prabang and had a magnificent time with friend and “sister-in-textiles” Vandara, who owns two guest houses, is a weaver of handspun organic naturally dyed cotton, promoter of all natural and traditional “handicrafts” of Laos, and an all around charitable, elegant, and lovely woman.  Vandara went with me to Vietnam last year, and met all of Thi’s family except Sho.  Just two months ago, Sho, her daughter Alice, and her French-born husband Antoine moved to Luang Prabang so Antoine could take the position of General Manager of the Victoria Xiengthong Palace Hotel, a hotel occupying the former Prince of Laos’ home.  Vandara invited Sho, Alice, and Antoine over for a home-made dinner (Vandara is a noted chef, among other skill sets), and I was so pleased to finally be able to introduce them.  I think Sho and Vandara will have a good friendship, and Vandara has all sorts of contacts for the family, including where Antoine can have new decorations made to accessorize his hotel. 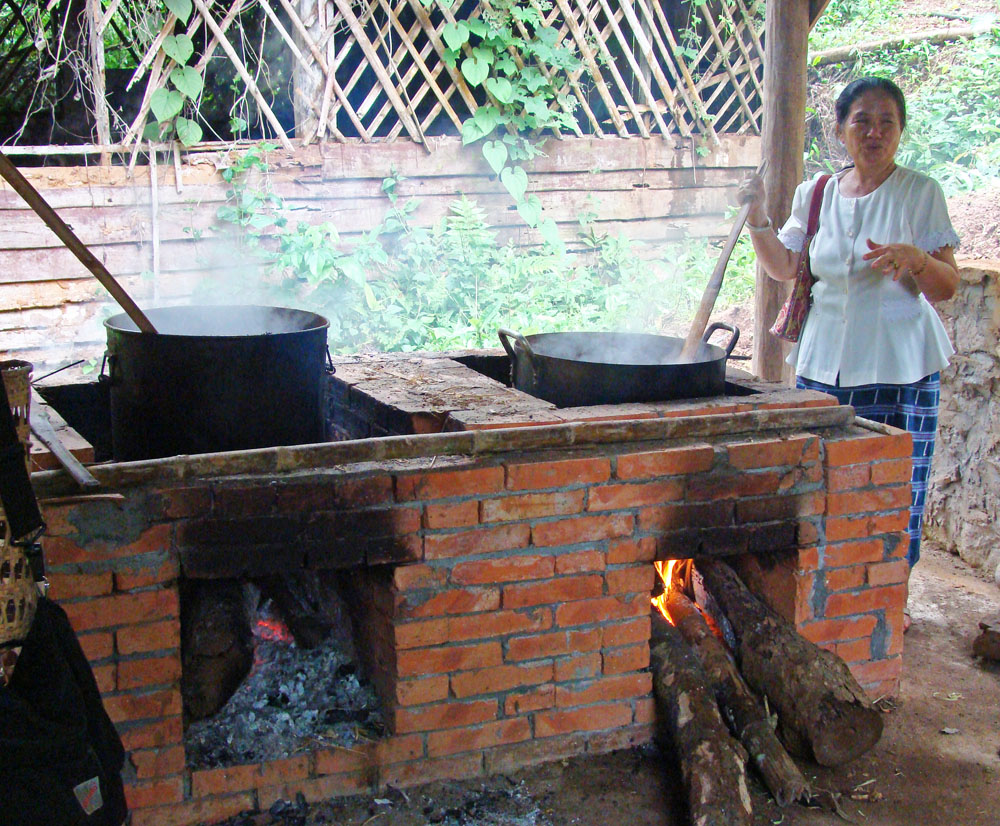 Maren’s sister-in-spirit and dear friend Vandara explains how she creates the dyes for her village’s cotton textiles.

Yesterday, Sho’s family and I accompanied Vandara to her second guest house at Tat Kuang Si – the “big” waterfall about 45 minutes from Luang Prabang.  Beautiful, crystal clear water to swim in – a huge relief from the humidity and heat of Laos – and another excellent meal, including some fabulously delicious fish from the Mekong, blue tea made from flowers, limes, and mint, and other dishes including local mushrooms and organic herbs from her extensive gardens.  Once again, spoiled rotten.  I purchased many beautiful, traditional baskets from the Khamu villagers, and even bought a large, wooden, hand-carved elephant for myself (or the highest bidder!). Of course, in Luang Prabang, I also bought some of Vandara’s organically grown, handspun, naturally dyed, handwoven cotton yardage, as well as more beautiful silk scarves from our friend Bounmy. 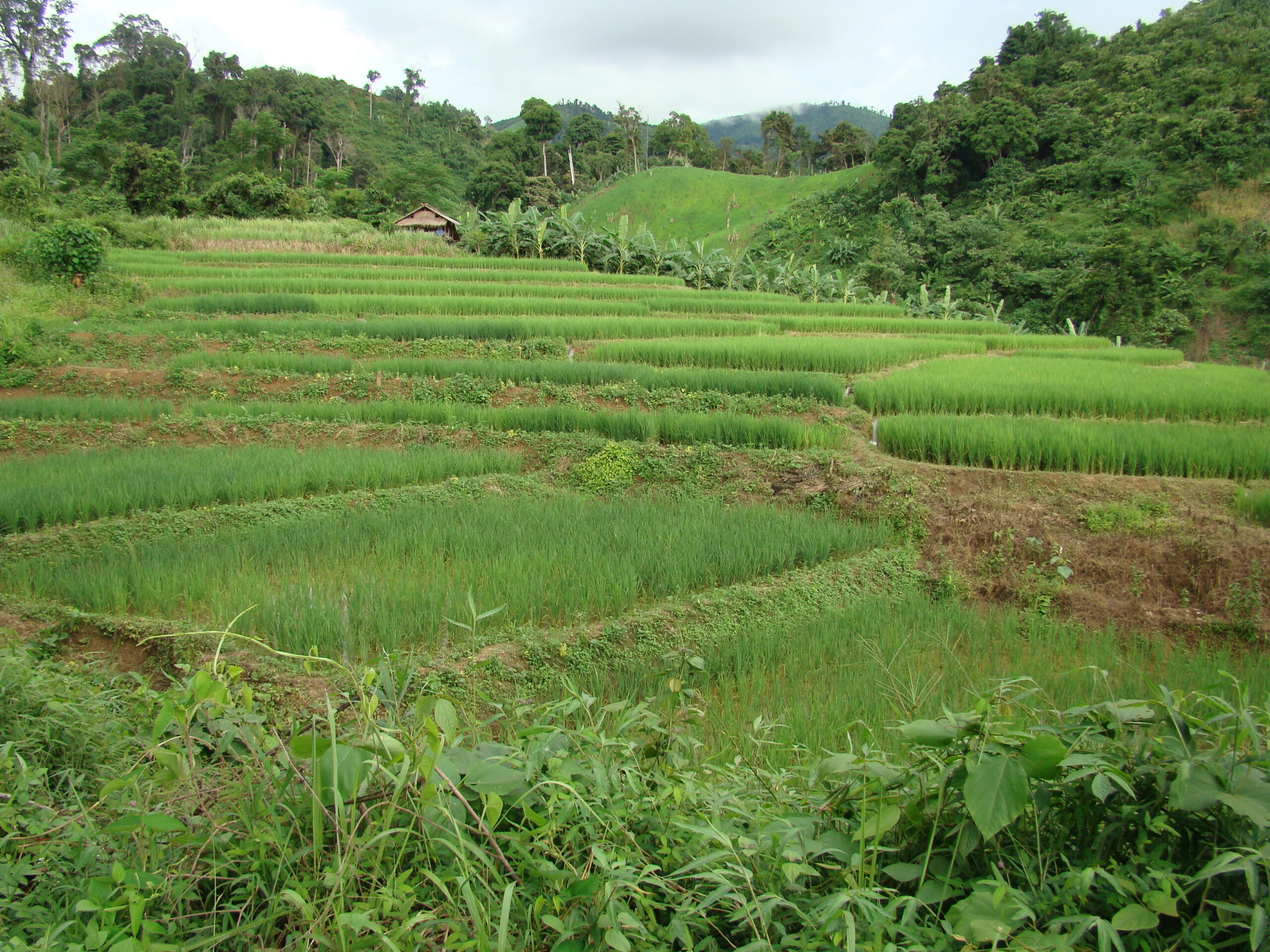 I have also had a great time searching out items for two European customers – one looking for tribal aluminum items, and another looking for any textiles with gibbons or representations of gibbons in them.  I found Red Dzao (Yao) pants with geometric representations of gibbon prints, and a cloth book with an embroidered gibbon.  I have more research and textiles to see in Houaphan Province.  The aluminum has been harder to find – the markets in Luang Prabang are not as diverse as in past years, and I have already found what I consider “the good stuff” – I’ll keep looking though!

In Phonsavan, I am meeting up with friend Mai (from Houaphon) and her son Bingo, and, in two days, we will be driving to Xam Neua, stopping in several weaving towns on the way to add to the collection.

Josh and Zall will join me in Xam Neua for the rest of the trip, and I’m looking forward to seeing them again!