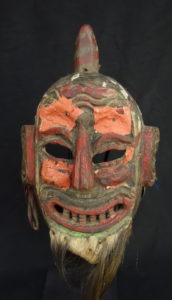 A Kim Mun Lansen mask from the late 19th Century.

I grew up in a household with tribal masks on the walls.  My parents had a modest collection of strange and macabre traditional Haida and Tlingit masks that (who?) peered at me from the living room and hallway walls. They watched me then as a kid, and still, on occasion, reveal themselves in my dreams.

When we began exploring the traditional village art of SE Asia, I was excited to discover that there were a couple of ethnic groups who have a tradition of carved wood masks: the Ta-Oi of southern Laos have flat wood masks that they hang in their homes and temples to ward off nefarious “spirits,” and the Kim Mun Lanten (also called Black Dzao or Black Yao) who used wooden face masks in ceremonies that help secure one’s “spirits” to oneself. These second masks have most caught my attention. 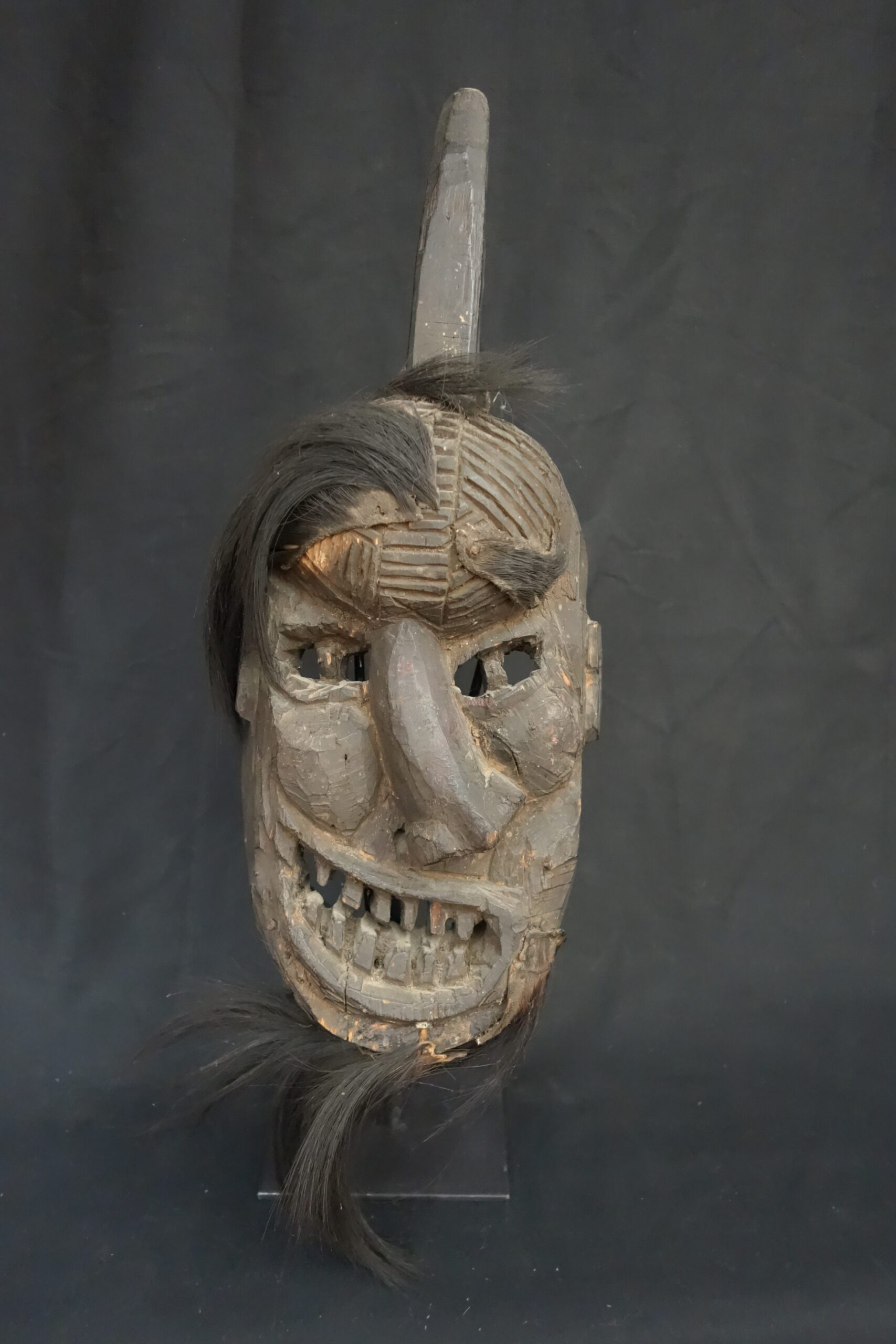 The Kim Mun Lanten people of northern Vietnam and Laos traditionally follow a Daoist doctrine which overlays beliefs in animism (being affected by outside “spirits”) and ancestor worship. The masks are worn by shaman during ceremonies to impersonate deities who help one’s own spirits adhere more strongly to the self. Thus, a mask may be used by a shaman to strengthen someone who is going on or coming back from a hunting or trade expedition. The masks are decorated with bright paper at each usage, and often an older mask will have vestiges of paper from its last village ceremony. Jess Pourret, author of The Yao (Art Media Resources, 2002), writes that masks with pink or white paper decoration are worn by female shaman to represent “one of the female deities who protect the souls of small children and oversee fertility in women.” 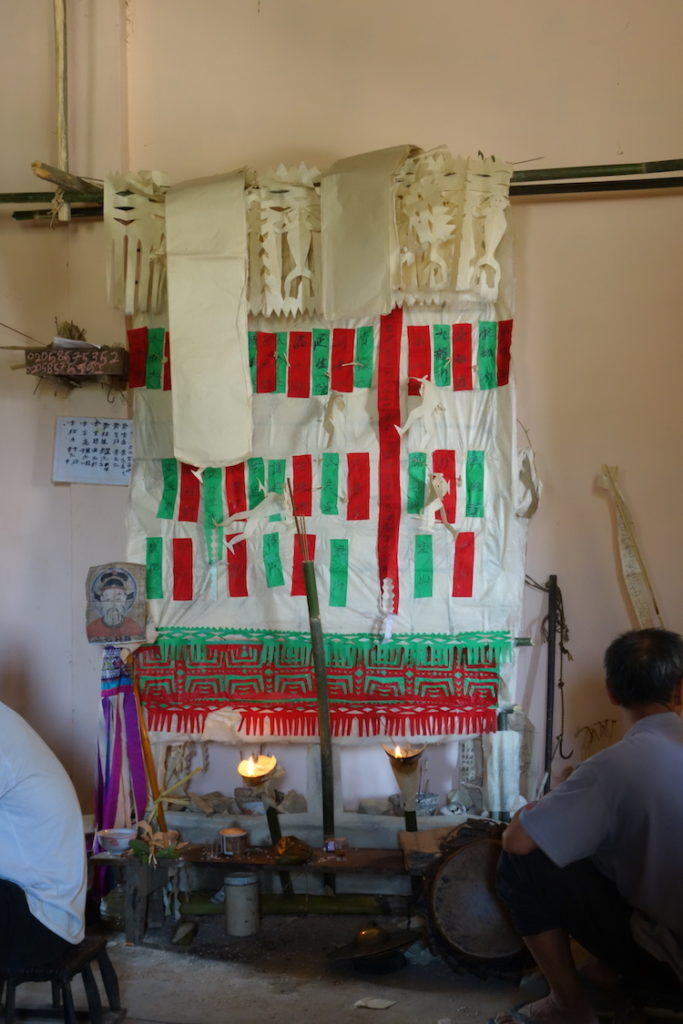 We have never seen a wooden mask in a Kim Mun Lanten shaman’s ceremony, though we have witnessed such ceremonies. This photo shows paper scrolls and cut-outs, a hanging textile, and other items used by the shaman in a just completed ceremony. We were asked not to take photos during the ceremony or of the shaman.

Some masks are carved from soft wood – often these are newer, necessarily thicker, and cruder in their cuts. Others are carved from hardwood, and made thinner and more face-forming – often these are more valuable as they took more precision to carve. The masks we encounter are quite varied, reflecting the uniqueness of each village and shaman. Many masks are additionally decorated with tufts of goat or other hair that is stapled to the wood to mimic beards and eyebrows. Pourret notes that even masks of the female deities may sprout beards. 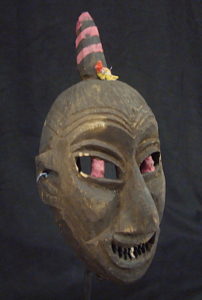 This mask is perhaps 30 years old. I love the gold foil on one tooth!

More modern Mun masks – those less than 30 or so years old – can be found in tribal art shops on occasion, and so we assume that a few may still be being carved for traditional use in the most remote areas. But that is conjecture, and not based on our direct experience; we have never witnessed a shamanic ceremony that used a wooden mask, and our few written-in-English resources indicate that these masks are very rarely used anymore. Communities that once relied on shamanic healing today have access to modern medical clinics and treatments, and science-based education dominates the public schools that are in every village. In all but the most remote corners of the Annamite Mountains of northern Vietnam and Laos, the traditional beliefs and spiritual understandings of the world have faded as the global world of modern information comes to reach Earth’s every corner.

Fifteen years ago, 19th and 20th Century Mun masks were often found hanging in dusty “tribal treasures” stores that speckled Hanoi’s touristed neighborhoods. A half-generation later, both the majority of tribal arts shops and the previous generations’ backlog of traditional arts that sustained the market are memories. Particularly, the most endearing, oldest, and highest quality masks (and other authentic ritual art) are now residing in private collections. [Oh – the masks we passed up in our early, ignorant wanderings…] 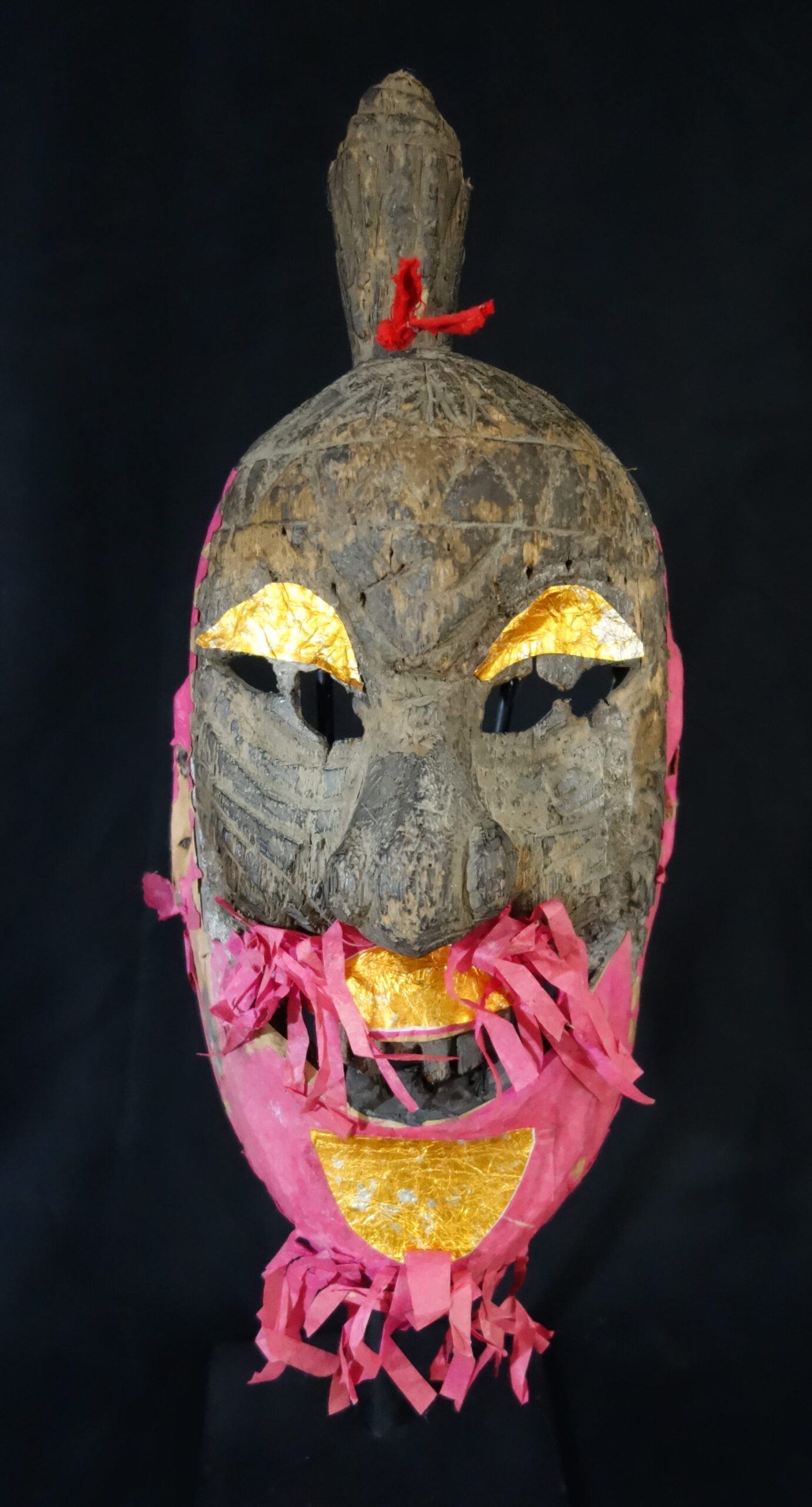 A Kim Mun Lanten mask with much wear from the late 19th century; the hardwood is incredibly thin and light. The paper and gold-colored foil was applied at its last village ceremony; the paper’s color indicates that the shaman was a woman.

We originally sought masks to sell at our events – and indeed, this year we do offer a small selection. But given that each of the one-of-a-kind masks seems to have a way of finding its way to my heart, and given that I grew up with a vivid imagination affected (empowered?) by masks, most have climbed into our personal collection. 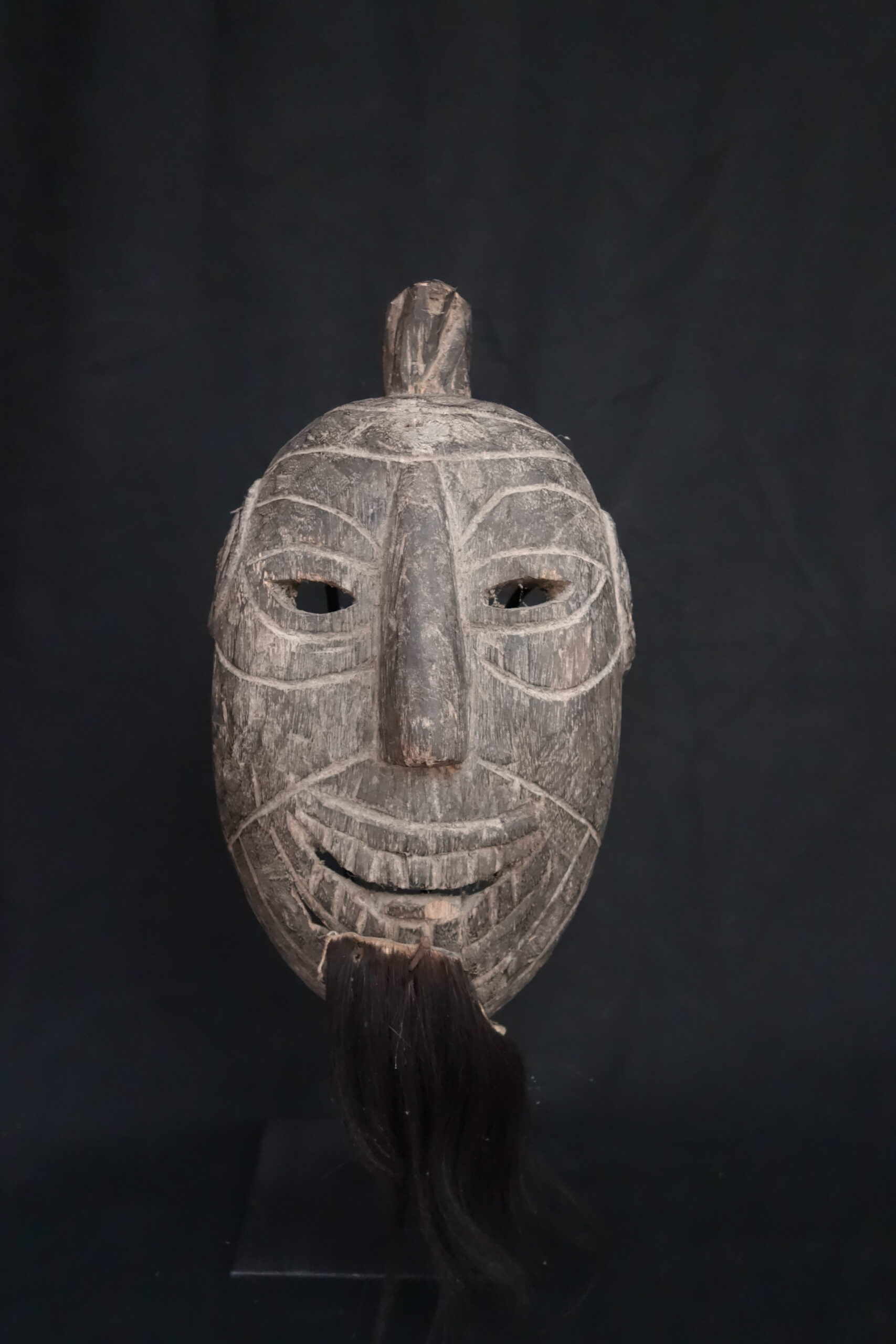 A Kim Mun Lanten mask from the early to mid 20th Century. We have been told that the high cheekbones are indicative of Kim Mun Lanten who live farther north in China.

Little has been researched about Kim Mun Lanten masks, and my personal desire to share their form and intention drove me to consider writing our second book that would celebrate this art within a traditional belief setting. I even consulted a publisher about such a venture.

Two things, however, have derailed this author’s dreams:

First, there is limited English-language research on the masks and the cultural beliefs of those who practice/practiced with these masks. I recently discovered, however, two extensive bibliographies of publications researching relevant beliefs systems – nearly all from university-based publications in untranslated Vietnamese or Chinese. This left the task looking a tad daunting…. 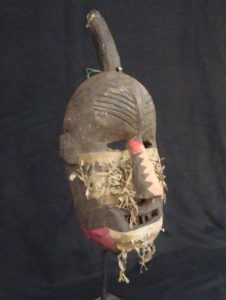 A newer Kim Mun Lanten mask, still decorated with its paper. This mask is perhaps 25 years old. Most newer masks that were used in traditional ceremonies are thicker, and the carving a bit cruder.

Second, as I started to dig into internet and library research, I realized that enjoying a personal relationship with a tribal group’s mask-work does not make me in any way a spokesperson for the masks, or the beliefs that give them original meaning. My selfish interest is a personal creation, and my outsider voice could never, without intensive research, come to represent an articulate understanding of these masks and the people and beliefs they symbolize. In essence, my attraction is a selfish artistic attraction, and such intimacies are best left to personal thoughts (and dreams) about how certain masks attract and affect my psyche.

So I think I’ll just enjoy the masks for what they offer me as I traverse and celebrate life’s path, and, in a personal blog to my friends, share my enthusiasms and quirks. 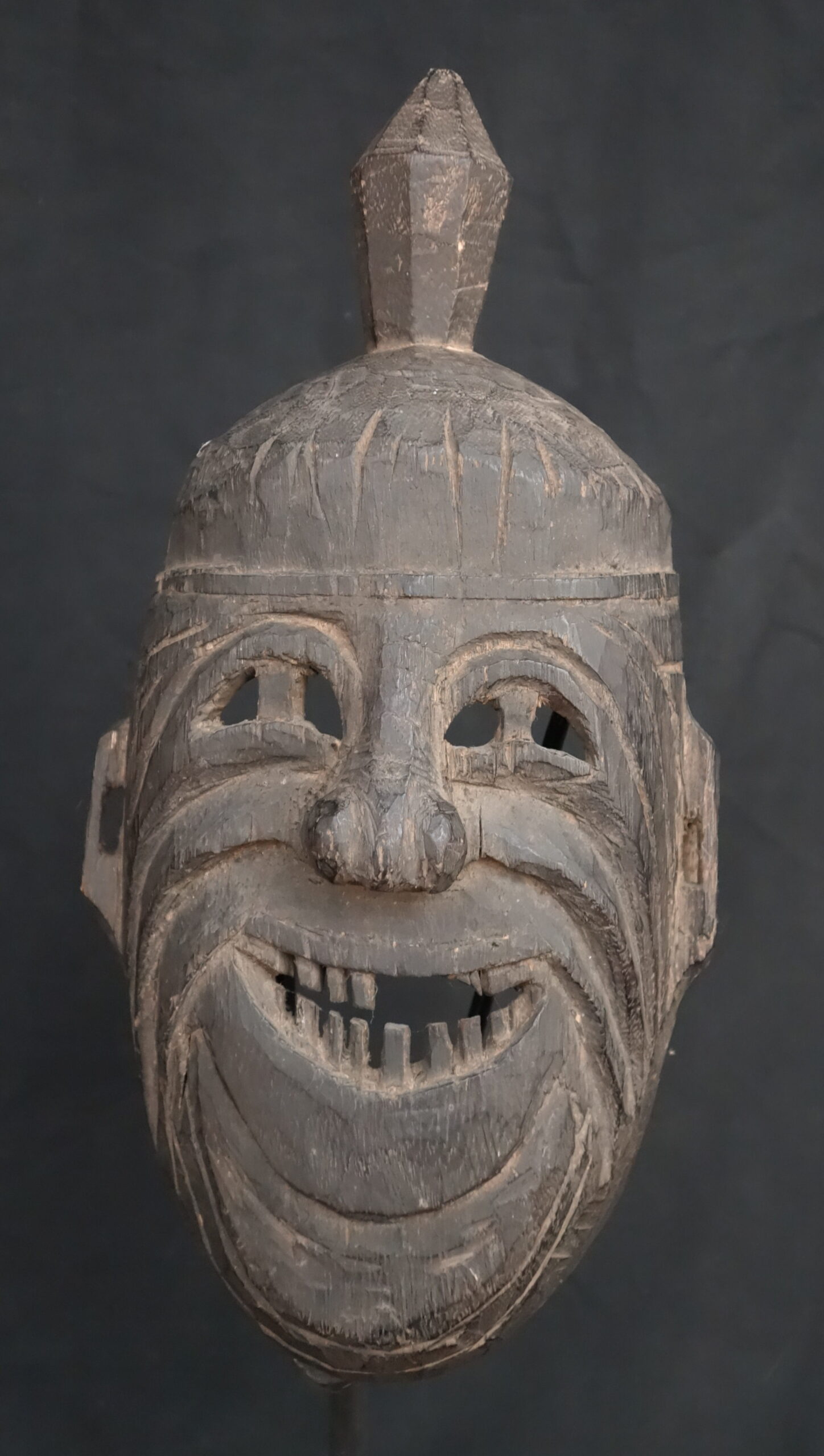