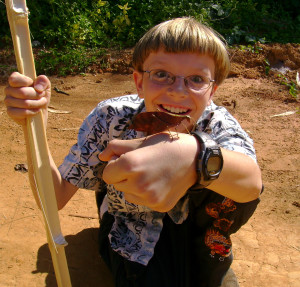 Zall with a large friend.

Way up in northwest Laos, our family decided to go off the tourist track to a tiny town called Muang Long, only accessible on a single-lane dirt road.  When we got off the ramshackle bus, we found the only place to stay in town and went to a little restaurant fifty feet away, where we ate a late lunch of fried rice and vegetables.  Soon after our  meal, a gentleman came by the restaurant and said he worked for the local “tourism office” and he wondered what we might like to do.  We decided it was a good time to do a trek, so the guy in charge set us up with a local man named Tui, who spoke pretty-good English and knew the area well.  We told Tui we wanted a three-day two-night trek to some outlying villages that had no roads.  Tui said he would be ready early the next morning and that he would meet us at our guesthouse.  He  met us with a small backpack at 7:00 the next morning.  All we had to bring were changes of clothing, our med kit, and a jacket for the cool evenings. 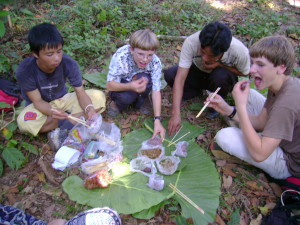 Tui, Zall, Tui’s friend, and Ari eating lunch by the side of the trail on a tablecloth of banana leaves.

Heading through the morning market area and between two stilted houses was a tiny trail snaking up a mountain.  I looked at the beautiful scenery in awe.  Dozens of steep, rolling green hills blanketed the vast landscape.  The steep trail wove through banana trees, strange ferns, dry-farmed rice fields, and bamboo forests.  Much of the forest had been cut down in previous years due to local “slash-and-burn” practices.  Down the trail, a small river ran through the foliage, and over the river was a rickety, bamboo bridge that would carry us to the other side.  Tui continued walking without paying any notice to the structure.  I hesitated, and then gingerly tiptoed across the wobbly bridge and heaved a huge sigh when I got to the other side.  Along the way, Tui told us about the uses of the plants; this large-leafed plant was cut into strips for baskets; the root of this tall plant was used to cure headaches.  He carved a spinning toy for me using a potato-like root he dug up and carved into a disk and some hemp twine he carried.  He also showed us some cool big bugs.  After about three hours of hiking up and down mountains, we stopped for lunch.  Tui had a tiny backpack in which he carried our lunch.  I was skeptical that he had enough food, but Tui kept pulling things out of his small pack: vegetables cooked with clear noodles, banana-flower and meat in a spicy sauce, globs of sticky rice.  I couldn’t believe how much food he pulled out of his pack!  We ate until we were stuffed.

We started down a long steep hill, and then met up with a wet jungle area.  I looked down and spotted a small worm.  When I asked Tui what it was, he said very calmly, “Oh, leech, hurry, let’s run.”  At the time, I was freaked out about leeches and sprinted as fast as I could.  It seemed like forever until we got out of the dank tropical region and back onto the dryer hillside.  A minute later I heard Ari, my older brother, scream at the top of his lungs.  I hurried forward and saw that a leech had suctioned to his lower leg.  Tui very easily pulled it off and sarcastically stated that it was only a small one.  Ari needed a quick band-aid to stop the bit of bleeding and protect the puncture wound. 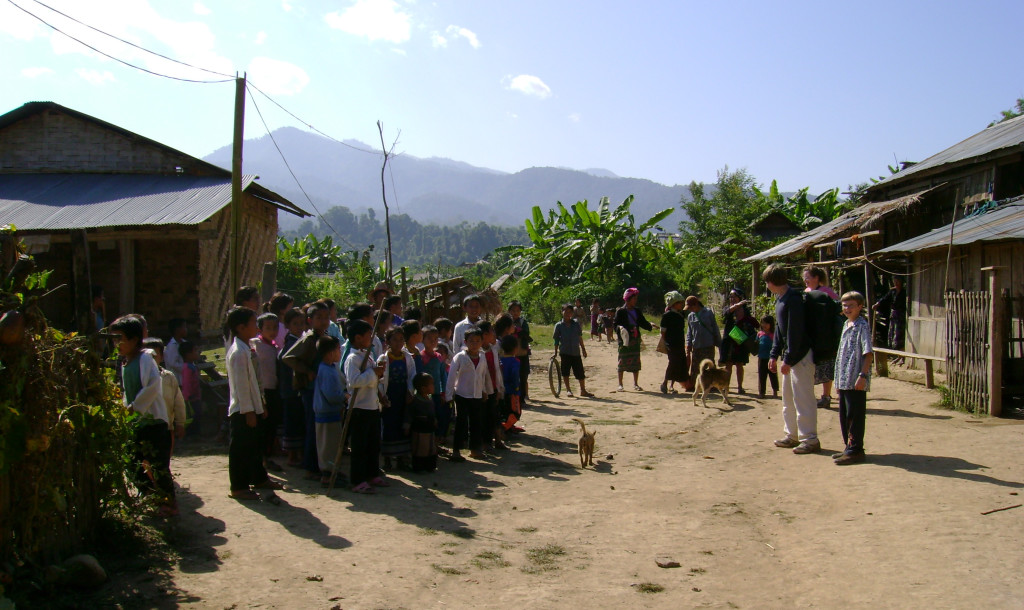 School let out in this Akha village to greet a novel visiting group – us!

We passed through a couple of small Akha villages on the way to our destination.  At every village, we would walk through the spirit gate that protected the village from the jungle spirits.  Once in town, all the people would gather around to watch us.  In one place, the entire school of maybe 50 kids were let out to come down and stare at the four white people stomping through their village.  We’d wave and say hello, and they would act shy or just plain stare at us.  Every time the whole town would follow us to the edge of the village where we would walk again through a spirit gate.  We would all wave goodbye.

Finally at around 5 PM we arrived at our first destination, a Kwi village.  As we entered the town (no spirit gates are needed in a Kwi village) a crowd of about 100 people – the entire town – swarmed around us and guided us to the chief’s hut.  Tui told us that Ari and I were the first white children this village had ever seen, and the first “farang” faces seen at all in many months.  We were directed up a bamboo ladder to a bamboo platform – the chief’s front “deck” – and told to take off our shoes. Ari accidentally put his foot through deck, breaking one of the bamboo slats.   The villagers all laughed very loudly and Ari blushed and smiled sheepishly.  For two hours we sat on the deck while dozens of people crowded around us in a semi-circle.  Mostly we all stared at each other. 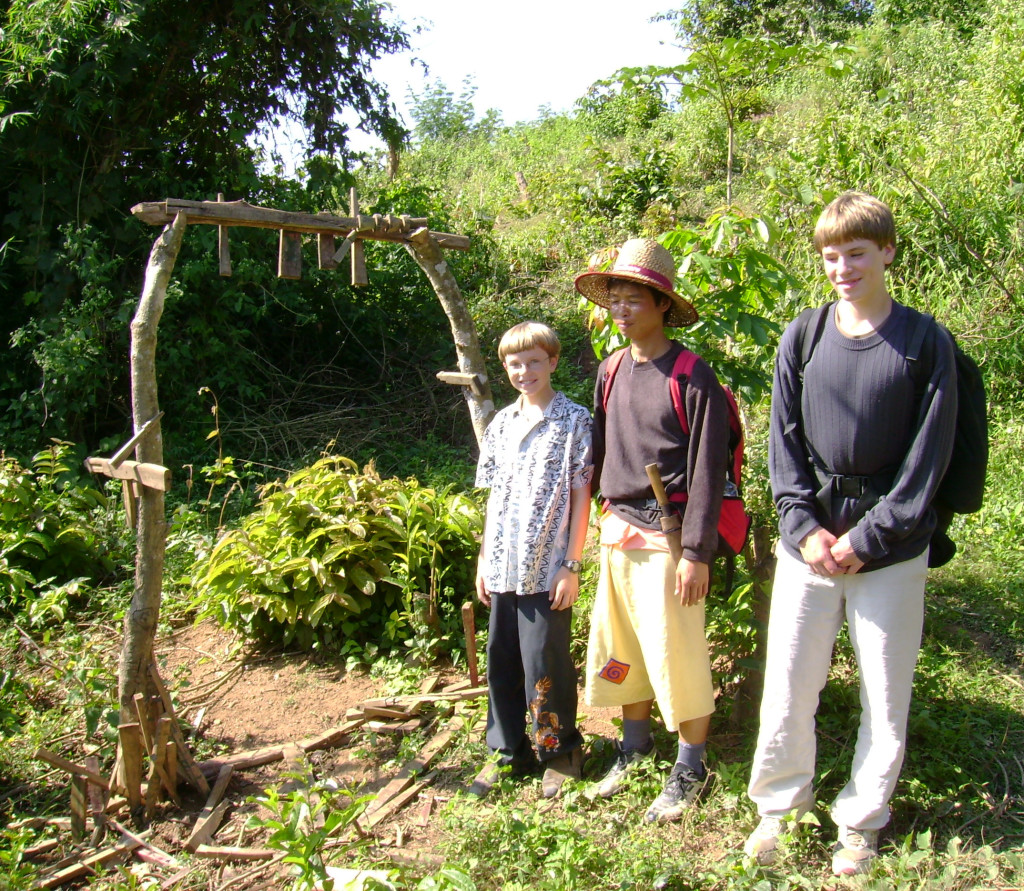 Zall, Tui, and Ari in front of an Akha village spirit gate.

Tui cooked an excellent dinner of stir-fried meat, vegetables, and sticky (glutinous) rice which the village provided (Tui had sent word earlier we would be there that night).  The “stove” was a fire-pit right in the middle of the two-room bamboo hut, set on large flat stones.  It turns out Tui is an excellent cook as well as guide!  As soon as the sun set we went to bed.  The chief offered us quarter-inch thick bamboo mats as hard as a rock and thick slightly mildewy quilts to keep us warm.  He made sure we tucked our mosquito nets in at the corners to avoid getting bit at night and possible getting malaria or dengue fever.  That night I slept like a baby, at least until the roosters starting crowing at about 4:30.

We got up before the sun, put on our jackets to fend off the cool morning fog, and had a breakfast of Mekong seaweed (an algae that grows in the river and really is quite delicious) wrapped around sticky rice. Another day’s adventure awaited us as we set off into the jungle enroute to a village of the Katu people.