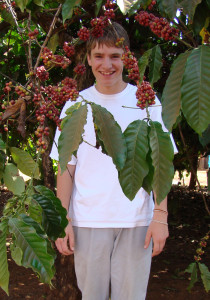 Americans generally see dogs as being man’s best friend and house pet, but many Vietnamese have a slightly different idea of canine possibilities.  We accidentally stumbled upon this discovery when looking for dinner in the town of Tam Duong.  It was late for eating (7:00 is considered late there) and we could not find a place to eat.  We were getting desperate for dinner when we saw a light shining out from between two closed shops – YES, it was a restaurant.  We sat down at a table and were, relatively quickly, brought our meat plate.  We thought that we were served pork, so we instantly began to grub.  After chewing the spiced, porkish meat for a few minutes we realized that it did not taste quite like any pork that we had ever eaten before – Dad thought maybe the pork had been sitting out too long.  The only other customer at the restaurant happened to speak a little English so we asked him if what we were eating was pork.  He replied that it was not, because he had ordered the pork and his serving looked different.  “What is this” we asked him, holding up a chunk of our meat with chopsticks, and he pointed towards a dog that was picking at scraps around the tables. 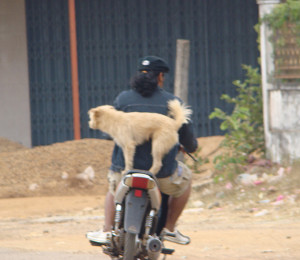 This was our first of two surprising dog moments during our travels.  The other took place while we were sitting on the side of a Laos road, dust flying in our faces, waiting for a vehicle to pass by that could take us to our next destination.  Several full cars passed us and time seemed to be crawling by at a snails pace.  Then, an immense truck that looked like it should have been carrying timber rumbled by.  As this monstrosity passed, we noticed that the truck was weighted down with (instead of logs) hundreds of cages occupied by yapping dogs.  After our initial thought of “look at all the cute dogs!”, the light dawned.  We slowly turned to each other and, after confirming what we had all just seen, turned back to the road to see the truck disappear over a small hill on the way to Vietnam.  Once the initial shock had worn off a little bit we recognized that the dogs were being taken away to be used in the place of beef.  The end of the month, the traditional time for eating dog, was about to arrive and we were witnessing the preparations.