Mines Advisory Group (MAG) is a neutral and impartial humanitarian organization that clears the remnants of conflict for the benefit of communities worldwide. MAG was the co-laureate of the 1997 Nobel Peace Prize (with the International Campaign to Ban Landmines) and has worked in 35 countries since 1989. They began work in Laos in 1993, and Vietnam in 1999. 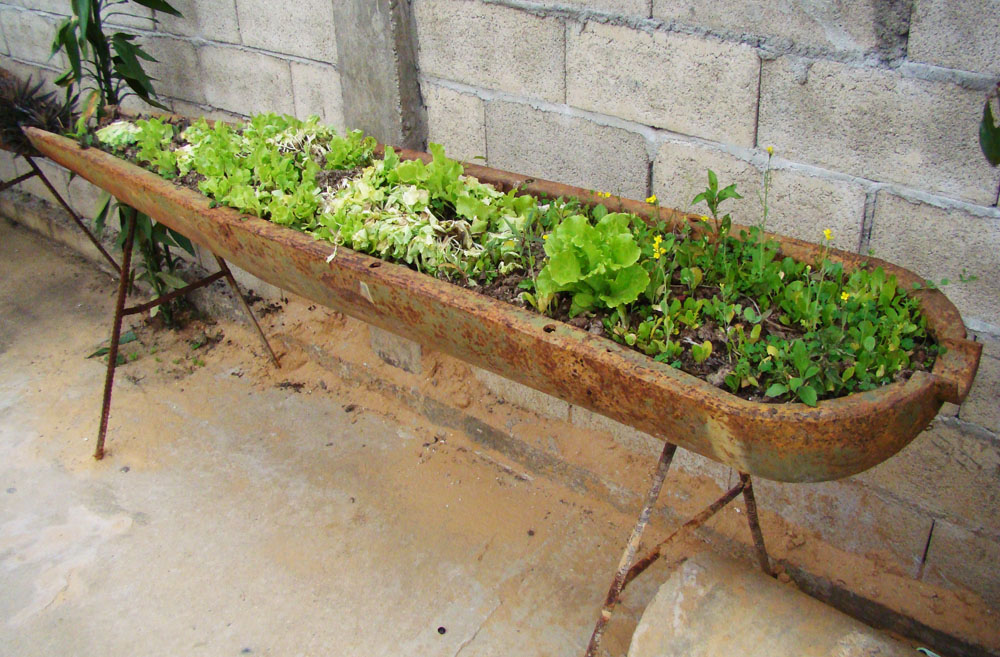 Half of a bomblet-holding bomb casing used now as a vegetable planter.

The Convention on Cluster Munitions (CCM), an international treaty that bans the use, production, stockpiling, and transfer of cluster munitions, entered into force on August 1, 2010. (The USA, the largest producer of cluster munitions, is one of the few nations that refuses to sign this treaty). Although the CCM is an important step, the ban has not lessened the need for unexploded ordnance (UXO) clearance to continue. Millions of bomblets – fist sized munitions delivered 600 at a time from a larger cluster bomb – still plague many communities, and many innocent people are still injured or killed from leftover, decades-old unexploded bomblets each year. 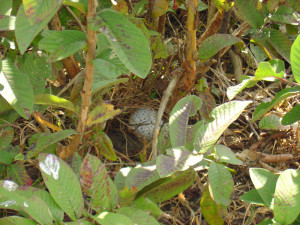 A bomblet hiding in a bush (MAG display).

Ti, an 11-year-old boy from Nathong village in Xieng Khouang Province in Laos, is one of the latest victims of a UXO. While working in his family’s paddy field in June, Ti’s pick struck a cluster bomb and he was severely injured by the tragic explosion. Most of his teeth were knocked out, and metal fragments similar to ball bearings were sent tearing into his right arm, stomach, and legs.  Ti explains, “One day, a few weeks ago, my father asked me to go to block off the stream that brings water into our paddy field. After I finished that, I went back to digging our vegetable plot. I tried to remove a small bush by pulling it out, but that didn’t work. So, then I used my spade to dig it out. Suddenly, I heard an explosion; and, at the same time, I fell down unconscious.” 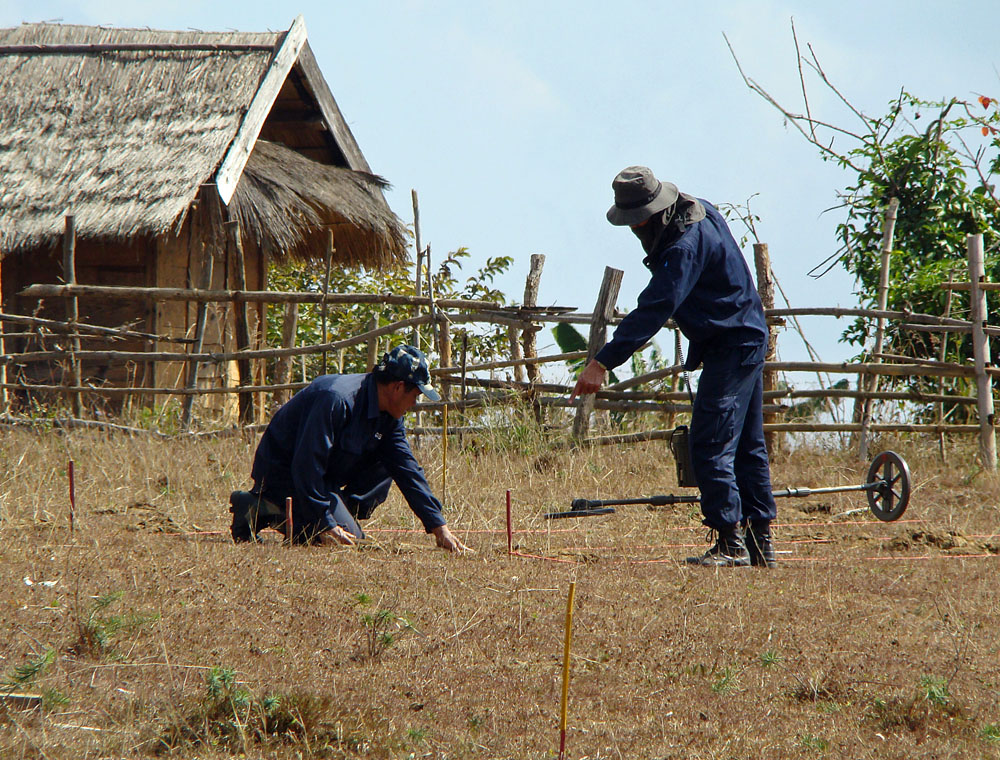 As Ti’s family has no vehicle, it took them more than two hours to get him to the provincial hospital in Phonsavan. Once there, Dr. Somsavay, the head of the hospital, helped to save his life. However, while Ti is amongst the 60% of accident victims who survive, his injuries are extremely serious. “Ti only has a small chance of keeping his arm, but we will do our best,” said Dr. Somsavay.

Many others are not so lucky. According to Laos’ National Regulatory Authority, about 300 UXO casualties are reported each year in Laos alone; Dr. Somsavay says that his staff deals with an average of 2 UXO casualties every week. 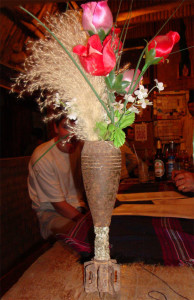 It is a sad fact that Laos is the world’s most cluster bomb-contaminated country. In the 1960s and 70s, it is believed that more than 270 million bomblets were dropped in a region that is roughly the size of Oregon. Some estimates suggest as many as 80 million of these bomblets failed to explode on impact and still litter the land – buried in a rice paddy or wedged in a bamboo grove.  “People in Laos have been living with the legacy of one of the heaviest and most under-reported bombing campaigns in history for 30 years, and although serious efforts to clear the land are being made, there remains a huge amount of work to do,” said Lou McGrath, CEO of MAG.

While the threat of war is past, the threat of UXOs in the soil looms as a daily threat for Laotians in poor, rural areas. Without continued clearance work, Laos will be plagued for generations by the threat of these random violent atrocities. Fortunately, MAG has been working in Laos for nearly twenty years, helping to clear deadly cluster munitions and other dangerous remnants of conflict that threaten people’s safety and prevent economic and agricultural development.  In 2008 alone, MAG destroyed over 98,000 UXOs and cleared 3.76 million sq. meters of land, 65% for agricultural use, and the rest to clear land for schools, access roads, water supply projects,­­ and safe tourist sites.  Still, less than 1% of the land needed for UXO clearance in Laos has been made safe.

For more information, or to make a direct donation to MAG, visit: www.maginternational.org.