“BLAM!”  Typical – our van has once again broken down in the worst possible location.  We back up a couple of feet so that we were not in the middle of a switchback and got out of the vehicle, expecting to see a flat tire.  We weren’t so lucky.  The left rear axle of the van was broken and protruding two feet out of the wheel well; black fluid stained the coarse pavement.  It wasn’t going to be a quick fix.  Luckily, Sho, our trusted Vietnam guide, knew the protocol for a van that has broken down on a switchback in Northwestern Vietnam.  She gathered some branches and rested them on top of a rock at the top of the steep switchback.  This theoretically alerted drivers who were coming down the mountain on the just-wider-than-one-lane road who would not have been able to see the disabled vehicle.  Our driver, meanwhile, whipped out his cell phone and, in a surprisingly calm manner, called friends and bosses for repair ideas. 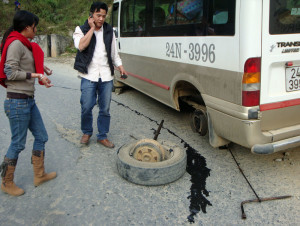 Sho, our driver, and our broken axle.

After standing around for a while, convinced our van was not repairable, we decided to walk down the hill until we got to a village that could put us up for the night or found somebody who would be willing to give us a lift to a place where we could stay.  The driver, who because of our ample bags of Above the Fray procurements, knew he had to stay to guard the vehicle and our stuff.  Sho cheerfully announced that we had two options: she could talk a local into providing a home-stay in the small local village we had just driven through (the village was too small for a guesthouse), or we could ask anyone and everyone if they knew someone who could drive us forward, over the up-coming pass, to the next town large enough to have rooms to rent. 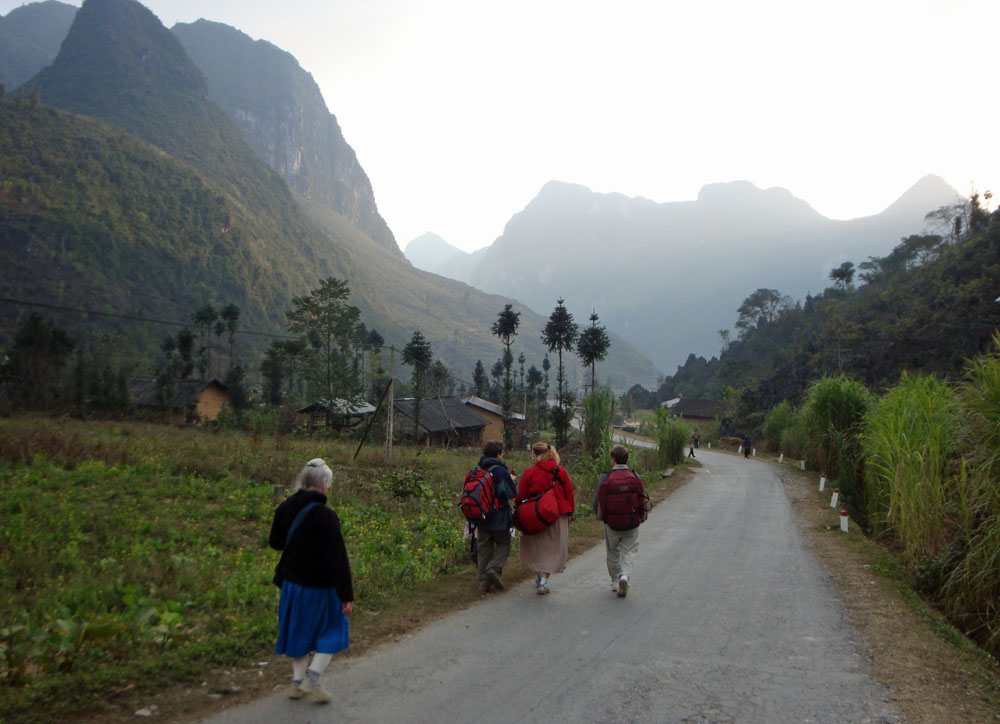 Walking toward the small town to look for a lift or a bed for the night.

Sho led us down the road, inquiring with the several locals about sleeping or transport options.  In the meantime, the rest of us were entranced by the tree-sized hemp plants leaning over the road; this was, needless to say, incredibly interesting to my brother and me because they are illegal to grow in the United States.

The sun was setting behind the rocky hills and we felt a cool evening breeze.  Just when we were about to start asking if someone there could house us, a government vehicle passed by.  Sho, a most beautiful woman, was able to wave the driver down and detail our situation.  It’s a miracle – we are saved!  Almost. 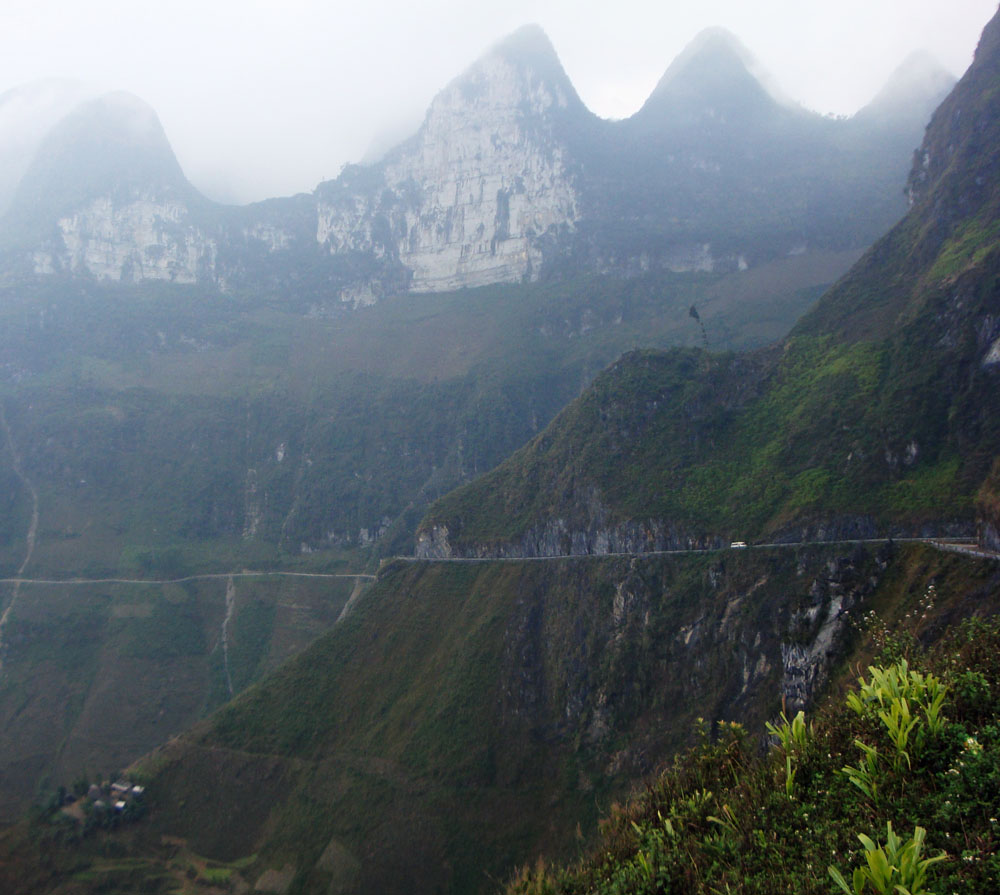 We crammed a few small bags that we had packed with necessities and squeezed four immense Western derrieres onto the narrow rear seat.  Grandma got the comfortable front seat, which seemed like the throne of luxury to the rest of us.  We were so tightly squeezed in that Sho had to sit on my lap (Oh no!  The suffering!).

Another view of the gorgeous scenery of Ha Giang Province, Vietnam.

The Jeep-like vehicle began its slow trudge up the mountain. The landscape was stark with jagged rocks, and the one-and-a-half lane “highway” was crudely carved across the steep cliffs.  The narrow valleys had small lonely homes that seemed to squeak out a living from the crude rugged garden terraces.  Our weight was obviously making the drive far more difficult, and we crept up the incline at a fast walking pace.  Then we hit the downhill.  We were white-knuckling the person next to us, as there was no seat that we could grip, in an attempt to hold on.  Our driver zipped around the sharp turns tossing us to one side, then the other.  If I hadn’t felt so mortal, I might have enjoyed the many towering cliff faces that formed the majestic, cloud-topped mountain spires that surrounded us.  Then we were heading back up the next slope slowly; and then another hair-raising ride down.  The silent driver seemed to hardly notice our presence.

After a forty-five minute stomach-churning thrill ride, for which the quiet government worker adamantly refused any payment, we clambered out of the jeep and into the town of Dong Van, our new destination for the night.  We desperately forced our legs to remember how to walk, as they had fallen asleep during the drive, and found a guesthouse.  I don’t think I have ever been so relieved to have a place to lie down. 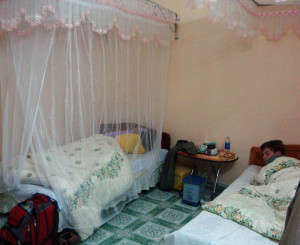 In our frou-frou beds in Dong Van, Vietnam.

Oh, and here’s the most amazing thing.  Apparently our driver had phoned his boss some 15 hours drive away, who phoned a car parts store in Hanoi (12 hours away), who that evening put a new axle component onto a bus.  Our driver slept in the van, and then by 10 AM the next day the bus delivered the axle to our driver right at the incident site.  By 11 AM the driver installed the new parts himself, and picked us up before noon in Dong Van.  I was amazed to witness such efficiency and technical capability in what felt like such an out-back place!