The Modern Crisis of UXOs in Laos, and MAG-Laos' Efforts To Save Lives

Above the Fray: Traditional Hilltribe Art donates 15% of all profits to Mines Advisory Group in Laos (MAG-Laos) to assist with the effort to help the Lao people in their fight to rid their country of unexploded ordnance (UXOs). Every day, the devastation wrought by bombs dropped over 40 years ago threatens innocent lives and economic development in Laos.

Between 1964 and 1973 the US waged an undeclared "Secret War" against Laos in an effort to eliminate the supply routes that armed Communist Vietnam. The US dropped more bombs on Laos than have ever been dropped on any one country – over 3 million tons, or about 1000 lbs for every Lao man, woman, and child. That's the equivalent of one plane-load of bombs dropped each and every 8 minutes for 9 continuous years.

Many of these bombs were "cluster bombs"; these coffin-sized shells open a few hundred feet above the ground to disperse up to 700 explosive "bomblets" that "carpet bomb" about two acres.

Laos' modern crisis stems from the fact that up to 30% of these bomblets – some 30,000,000 fist-sized explosives - did not explode upon impact, and now sit in the soil or lay wedged in a bamboo grove waiting to be disrupted - perhaps by a farmer's plow, a builder's shovel, or a child's curiosity. Forty years later, these unexploded bombs, called UXOs, still kill or maim at least one person every other day. In 2005 alone, there were 164 reported casualties from UXOs in Laos; 54% of the casualties were children. Many casualties are not reported. The hazard will continue to exist for over 300 years until the metals deteriorate. 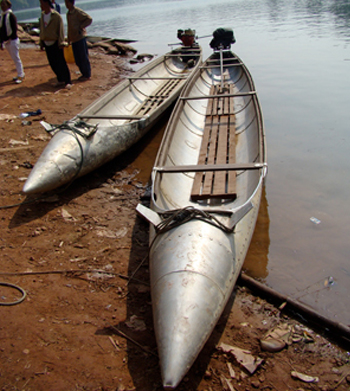 Fuel canisters dumped from US planes reborn as boats.

Defused "bomblets" in the MAG office in Phonsavan, Laos.

What Is Being Done To Help the Lao People?

•Check: We do accept checks as form of payment for charter flight. Check must be a cashiers check and received prior to departure. If check is not received before flight, Devinaire has the right to cancel or reschedule flight until payment is received in full.

There is help. Mines Advisory Group (MAG) is a non-political, non-governmental international relief organization that helps civilians recover from war. In Laos, MAG trains teams of men and women to locate and destroy UXOs, provides the tools for these teams to do their work safely, and provides education to adults and children about the hazards of touching or playing with old ordnance.

Clearing land of UXOs is a tedious and expensive process. MAG is concentrating on clearing potential tourist sites (as these sites provide excellent jobs and brings in essential money), and also areas with dense populations, such as school playgrounds and construction sites. For example, when clearing a few acres recently to expand Khan Khai Teacher's College, MAG-Laos located and destroyed 114 live bomblets.

In 1997, MAG was honored as the co-laureate of the Nobel Peace Prize for its excellent international work.

To learn more or to send your own tax-deductible donation, please visit www.maginternational.org 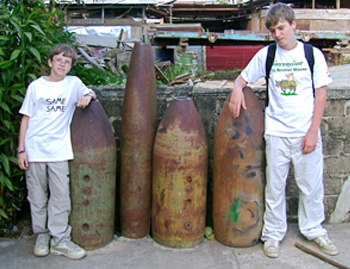 Zall and Ari with bomb casings in Laos. 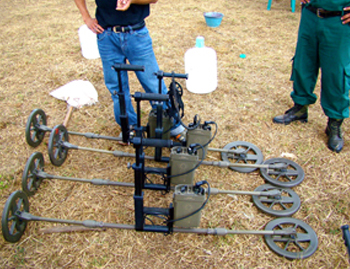 MAG Team members inspecting their metal detectors before clearing a field in Laos.

Cluster Bombs and the USA Today

The United States still produces and uses cluster bombs, and the failure rate is still close to 30%. In 2003, the USA dropped over 2 million "bomblets" on Iraq; some 600,000 live bomblets still lie in the sand. And since 1991, over 1,200 innocent Kuwaiti citizens have been killed by UXOs dropped by the United States during the First Gulf War. A Handicap International study reports that over the last 20 years, civilians make up 98 percent of those killed or injured by cluster bombs.

In March, 2009, Barack Obama signed legislation that require that cluster bombs only be used in areas without civilian populations, and also requires that future cluster munitions have a failure rate of less than 1%.

While this is a sign of progress, cluster munitions have proven to be a tool that harms civilians far more than it harms any "enemy," and we encourage the United States to sign the International Convention on Cluster Munitions, a document banning their production sale and use which has been signed by Britain, France, Canada, Australia, Germany, and over 80 other modern nations.

have questions in regards to any of our items?