Mr Siovan grew up in a small village a few hours outside of Houaphon Province’s main city, Xam Neua, in N.E. Laos.  As a child (and during the horrific Vietnam War) he learned the art of basket weaving from his grandfather.  Traditionally, while women weave the textiles, men shape the bamboo, rattan, and other baskets used in villages for carrying, holding, protecting, and storing their textiles, food, and firewood. 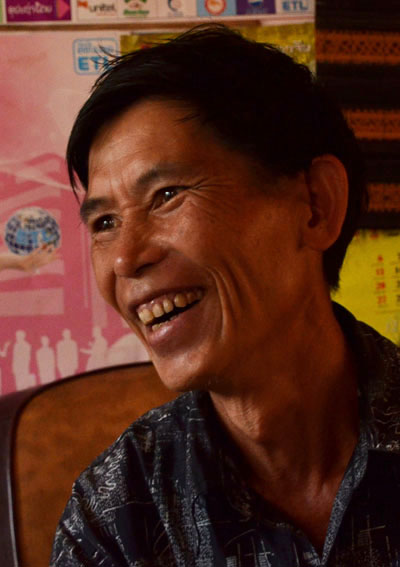 Mr. Siovan at his home.

After the war, Mr. Siovan was able to get a government job, and he worked for 30 years for the Department of Agriculture in Houaphan Province.  While a civil servant, Mr. Siovan earned a little extra cash selling baskets, enjoying the patient, methodical work, and soon he was being asked to teach the art of basket-weaving for the next generation.  His reputation for both quality of weaving and teaching skills grew quickly, and he is now working full-time as a weaver and teacher. Mr. Siovan has earned the title of a Master-Weaver from the Lao government, and he has become involved in major organizations that are both promoting bamboo production as well as traditional skills that are disappearing across much of the developing world.

Mr. Siovan captured our attention not only with his bamboo and rattan baskets (which are wonderful), but rather with a grandfatherly side-hobby of weaving fern-frond animals.   We were enamored of the cleverness, the precision, and the individual personalities that he captures in his fern creations. 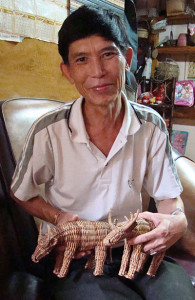 Mr. Siovan shows us two of his fern creations.

On our last visit to Xam Neua, we again stopped by his house to see what he had available to purchase.  Unfortunately for us, the only fern frond animal he had was his first, a water buffalo with a rope through its nose, and an unfortunately mouse-chewed hind foot.  It was so charming, though, that we had to add it to our personal collection.  We really wanted to bring some of his creations home, and, to his delight, we ordered a few “for our American friends”.  He was so thrilled at the idea of his animals coming to America that he said he would do an extra good job on them so they would represent him well.  He said it would take him two months to collect the fern fronds, prepare them for weaving, and weave the animals.  We finalized the business, and the results are now available for all to see and purchase! 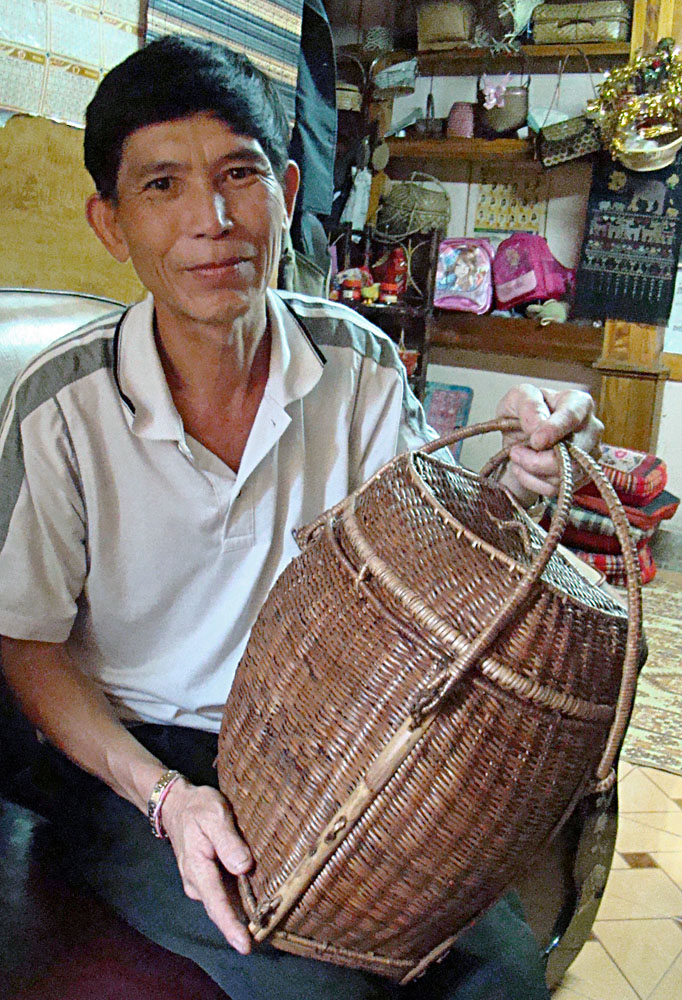 Mr. Siovan holds one of his own baskets.