The World Is Not a Fair Place

Our older son, Ari, is spending the summer in Sovie, Ghana, a remote town of 2000 people, volunteering with a service organization; now his days are filled with constructing a latrine at an elementary school (a 10-seater!), helping the 4th grade English teacher (who apparently knows little English), and studying international social justice issues with a small group of other fortunate young adults.  Like Laos, Ghana is under-developed and struggles to provide for its citizens.  One of the toughest challenges for both these countries is to ensure that its most vulnerable citizens are treated fairly, safely and with dignity.  Throughout Laos (at least in the parts tourists tend to visit) are signs in English stating that child-sex crimes are illegal and that if anyone hears about or witnesses such a crime, to alert the authorities.  Sadly, such heinous crimes are not unusual in Laos, Ghana, and many other under-developed nations. Ari managed to get a few minutes at an internet café and sent us a report on a vital program fighting child-slavery in Ghana: 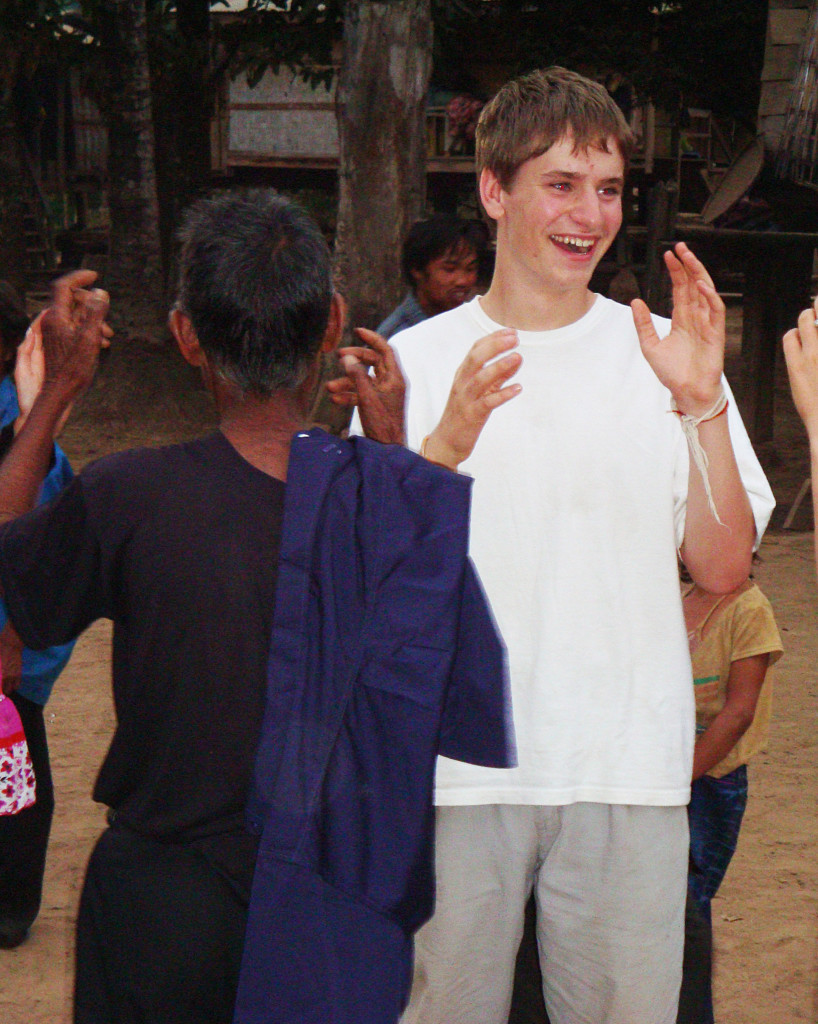 Ari dancing with Katu villagers during their New Year’s celebration (no pix yet from Ghana!).

Today, our group visited a program called Challenging Heights.  Challenging Heights was started and is currently run by an ex-child-slave named James Kofi Anan (nope, not related to the previous UN President).  This program “rescues” child slaves from the communities where they were enslaved and returns them to their families.  To ensure that the ex-child-slaves are getting an education that is appropriate for them and that they are welcomed back to their community, Mr. Kofi Anan has established schools that they can go to.  We visited one his schools located in a town that has one of the highest rates of children who are sold into slavery in the world.  The school was mostly made of cement and had random English words on the walls.  Inside, the rooms were separated by simple walls of cardboard.  Despite the limited funding and difficult learning atmosphere, the children were almost all literate in English (even at the first and second grade levels) and were studying math, science, government.  This school seemed to do an incredible job.

After visiting the school, we shared a lunch with Mr. Kofi Anan.  He described in great detail many of the abuses that he had to suffer.  These abuses were physical, sexual, emotional, verbal…  His speech brought me near tears and made me really think about the situation that so many children are being forced to live with in Ghana and elsewhere.  He also told us that many of the child-slaves whom he rescues are in the same area as Sovie.  This brought to mind images of all of the children who I have taught and worked beside being whipped and sexually assaulted before they go out to labor endless hours on Lake Volta fishing.  It’s hard to say all that I want to with a simple email.  Words are insufficient when it comes to describing feelings like the ones that I experienced while working with Mr. Kofi Anan.  The best image that I can conjure is of a boy I saw sitting at the school.  When I asked why the boy was not playing with everyone else he said, “My head is spinning.”  This was a result of the abuse that he suffered.  This boy is now unable to be a full participant in games, even in a school that was specially designed for children who have suffered like he has.