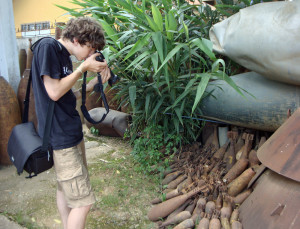 Zall on the job, photographing bombs, mortars, and fuel tanks from the “American War”.

Bony gray fish paste – that’s how this story starts. Bony gray fish paste in the middle of Xam Tai, Laos: a small weaving town and our favorite location on our travels. Who needs a reason for a party when you can have one anyway? That seemed to be the motive behind our weeklong stay in Xam Tai. Our friends wait patiently all year for us to arrive as we bring in money for the village as well as Malaithong, our guide and friend, who has been best friends with the head-weavers since they were children (and who see each other only once or twice a year). This was, of course, cause enough for quite the town party. 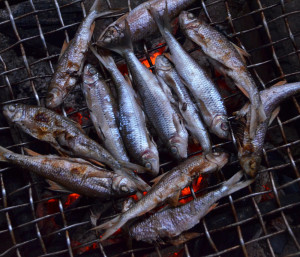 Fish grilling in preparation for laap.

Long tables were set out for a slew of guests, including, one evening, the ex-governor of the region, and games of petanque (bocce ball) created shouts with each successful (or failed) shot. Drinks were poured and drunk and offered and accepted and the atmosphere made any expression but a beaming grin impossible to make.

So here I was sitting at the table waiting for the next jubilant feast when the special dish came out from the back of the kitchen. Three people had worked for 2 hours on the traditional ceremonial Laos dish of fish laap. It had been a whole afternoon of light snacking, mostly on bits of dog and beer, so we were all famished. Plopped in front of me was the remnant of probably 50 small fish chopped up in their entirety so finely that it had become a gray fish paste. Throughout our journeys to foreign countries, I’ve learned to never judge a dish before it is tried. So I took the usual amount of glutinous rice in the palm of my hand, indented it with my thumb, as is the custom, and scooped the gray matter into the indent. 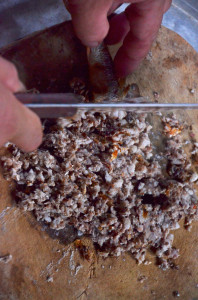 Souk’s husband starts the chopping process of the fish for laap – a very special ceremonial dish for friends. The chopping continued for another hour and a half.

The first things I noticed were the bones. These bones weren’t the easy-to-crunch-through kind of bones; they were spiky and sharp and no matter which way I turned them with my tongue, they seemed unchewable and stabbed me between the teeth. The taste wasn’t in any way particularly unpleasant – just musty, plain, and wet: yes, wet is a flavor, trust me.

At this point in time, it had been far too long since I had any sort of real protein. Both cheese and beans were unavailable, so the only source of real protein was meat, and my body was crying out for such sustenance.  There was a place not too far down the road that a couple days earlier had served grilled water-buffalo bits on skewers. Desperately, the next day, we asked our good friend, Souk, if we could have some of that meat as our contribution to dinner. She agreed and we all felt relieved to know a protein-rich meal was forthcoming. Souk returned several hours later to say that the meat lady wasn’t cooking that day because she was working in the rice fields – but Souk said she had found another place that served barbeque also. 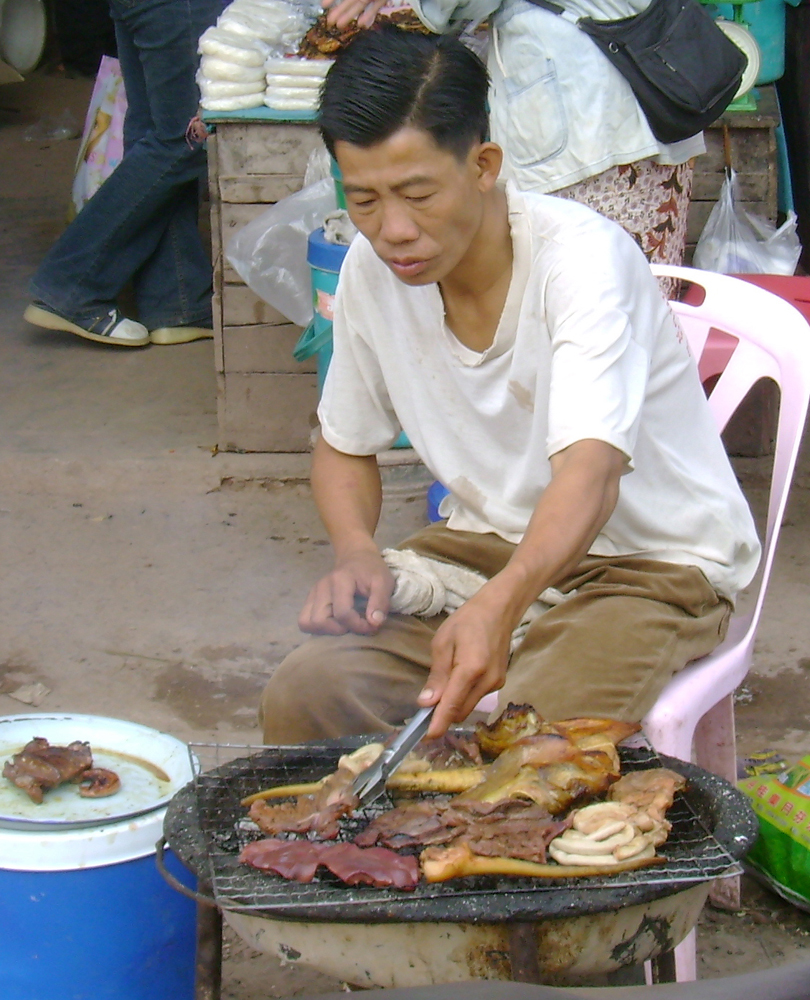 A Lao man in the market grilling a pig face, intestines, liver, tail, and other offal.

Late afternoon was hot – an unforgivable heat that seems to add more gravity to every limb of your body – and in Laos in July, that meant thunderstorms – so I was out trying to photograph some of the distant lightning when my parents called me to dinner.  My stomach was gurgling – I was running on empty. I arrived at the table and sitting proudly in the middle of the tables were big bowls of… skin? fat? gristle? My smile dropped and I tried to look like I was excited. Mom gave me an apologetic look while I sat and grabbed the small piece close to me. I chewed. And chewed. And chewed. My mom looked at me again and whispered, “pig ears.” I wasn’t too unhappy really; they tasted pretty much like oil and pork fat. So then I began to think. But where was the meat? 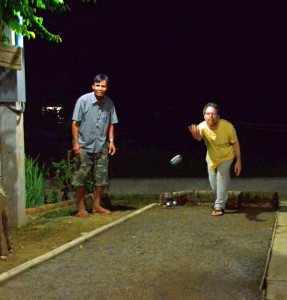 The next day, while we were playing another game of petanque, my dad and I saw smoke from a grill rising above the trees just down the road. We walked down to the fire and saw more of the Laos specialty: twisting organs, severed tubes, pig ears, and more barbequed I-have-no-idea. My dad picked up a few more chopped ears and another chewy thing and we had our march of defeat back to where we were staying and a crowd of local petanque players eager for our offering. I sighed and sat down in the chair with a cup of sweet Lao-Lao and nibbled on a piece of ear.

Where was the meat? I wondered once more and bit down on another sliver of pig ear while the sounds of petanque rang in my ears.