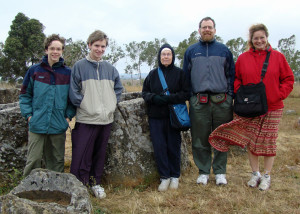 All of us, including Grandma, at the Plain of Jars – it was COLD!

At a family meeting before our most recent trip, my dad had expressed a bit of concern at grandma joining us.  She lives in Seattle, so we don’t get to spend a lot of time with her, and he thought perhaps she may be a touch more frail, being 79, than we were used to.  “Let’s be sure to not push her beyond her comfort zone,’ he had said.   “Someone should always walk in front of and behind her along bustling streets.”  “Let’s make sure we eat foods that agree with her.”  Although we kept these ideas in mind while traveling, we found that the meeting may have been a little overkill.  Grandma was amazing!  She ate everything, never complained about hard beds, saw the world through eyes that were understanding of cultural differences, and always made the best every situation. 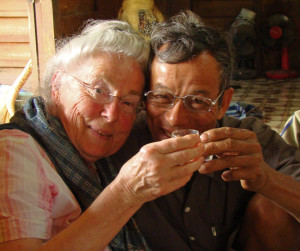 We saw Grandma’s positive attitude and energy starting on our very first day, when everything was most new and foreign.  Our first stop in Hanoi was a tiny coffee shop that serves the thickest, richest Vietnamese coffees.  We sat on tiny plastic stools right on the road’s edge and grandma feasted on the scene of street vendors, overloaded motorcycles, and a woman in a bamboo hat washing dishes in the ditch.  Revved up on coffee, we went to our favorite bun cha restaurant.  Bun cha is a rice noodle soup with chunks of an unidentifiable grilled meat and sausage and slices of kohlrabi in a slightly sweet-sour broth.   The restaurant is a hole in the wall – a mildewy cement box on the side of the road that doubles as the entrance to a house.  Nonetheless, Grandma squatted down at the low table and relished the new flavors.  She didn’t hesitate to dig in to the unknown meal or to enter the restaurant that, in the United States, would have long been shutdown. 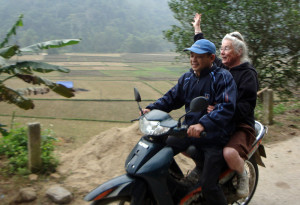 A couple days later, in Luang Prabang, it rained – really hard.  When the downpour began, we were wandering through the night market seeking a dinner.  We wove our way through the vendors’ tents and jumped when the rain-soaked light bulbs sparked and died; buckets of water held in the tent folds gushed onto the street shorting out electric lines and we felt crunched between the anxious people desperately packing their wares and tourists scrambling out of the now-chaotic market.  Despite the discomfort, Grandma, drips rolling over her glasses, was laughing at the hustle and bustle of the soaked market.

Our third homestay, at Babe Lake, verified our belief that grandma was born to travel.  After a fantastic, homemade dinner, we crowded into our host’s kitchen to share traditional toasts of rice whiskey.  Grandma joined us as the host passed around the seemingly magically refilled shot glass.  The men in the room were transfixed by the television, which was showing “Vietnam’s Next Top Model.”  They decided that yet another toast was necessary – to “long legs,” much like those parading across the screen.  Sho, our guide and family friend, quickly interjected, “And to men’s broad shoulders.”  Grandma couldn’t just let this stand alone, so she added, “And big muscles!”  After a round of applause and a decent amount of head nodding, we drank to beautiful bodies, something that all cultures can appreciate.

The very next day, I watched grandma hop on the back of a motorcycle – her first motorcycle ride ever.  She hooted “tally-ho” and waved as she shot off down the road. Now, whenever anyone asks me about my dad’s mom, these and other travel scenes are going to pop into my head – some of the best grandma moments ever.