Market Pho and the “Bpaeng Neua Blues”, by Zall, age 15

So the giants from the West walk into a local marketplace, and every head turns our way.  It’s not a usual sight to see a family of Americans traipsing through a community market. Smoke is heavy hanging under the canopy stretched above, and one or more of my family chokes on the homegrown tobacco fumes.  Small tables with even smaller chairs are placed around the open sided shelter in a somewhat orderly fashion and near the center table is a woman bent over a colossal steaming pot throwing herbs and garnishes into the behemoth of a vessel.  After the initial shock of four American intruders being present, commotion erupted again and the daily arguing, haggling, and chatting of the town’s most recent gossip ensued, mixed with talk of the strange new travelers (“falang” in Lao) now present in their midst.  We begin our walk over to the tables set up for breakfast, through the herb tables, past the meat section (trying to ignore the various organs, meats, birds, rodents, and dogs), and over to the great pot stewing in the center. 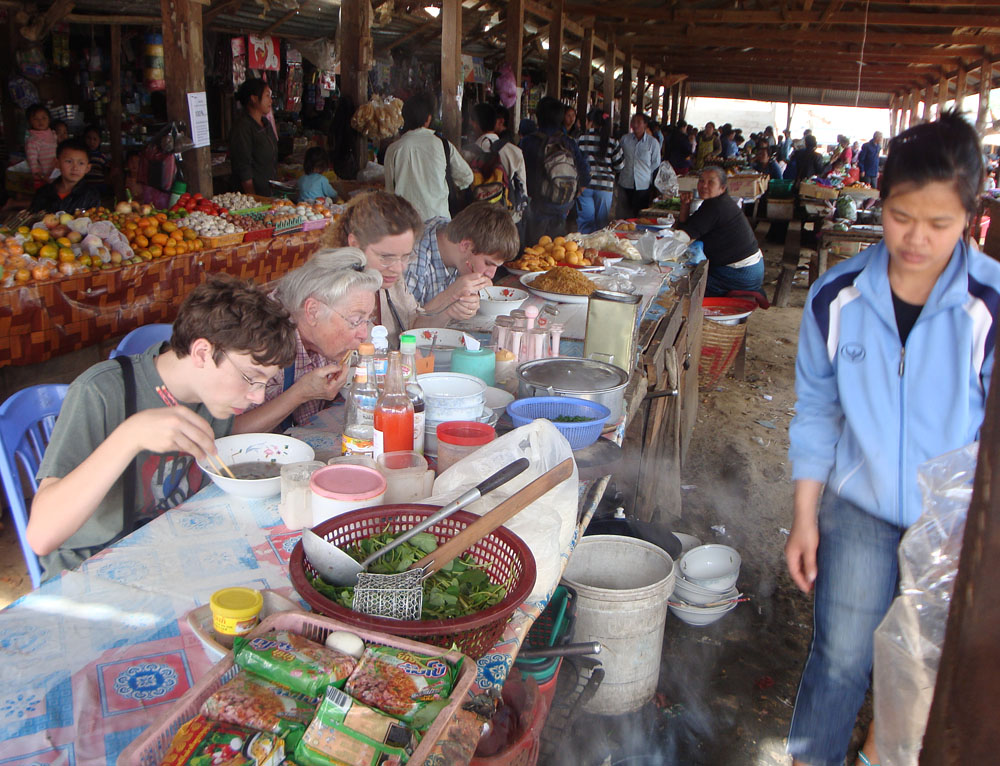 Eating breakfast pho, with grandma, in the Xam Tai market in NE Laos.

The woman cooking looks up to us with a confused look and says something in her local dialect that we don’t understand.  “Sii pho gai?” my mom asks.  The plump woman breaks out into a warm smile to reveal her horrible teeth and tilts her head back and releases a gale of amused laughter.  She sits us down at the nearest picnic-style table and heads back to her cooking table, chuckling to herself all the way.  As she adds more ingredients to the pot and telling everyone who would listen about what had just occurred, she takes out the clear bag of monosodium glutamate.  “Bo! Bo sai bpaeng neua!” My mom manages to say just in time to stop the cackling woman from dropping two heaping tablespoons of the white crystallized substance into each bowl.  The woman looks at my mom with even more disbelief and breaks out into an even louder howling.  The whole crowd around us bursts into laughter, and soon we joined in. 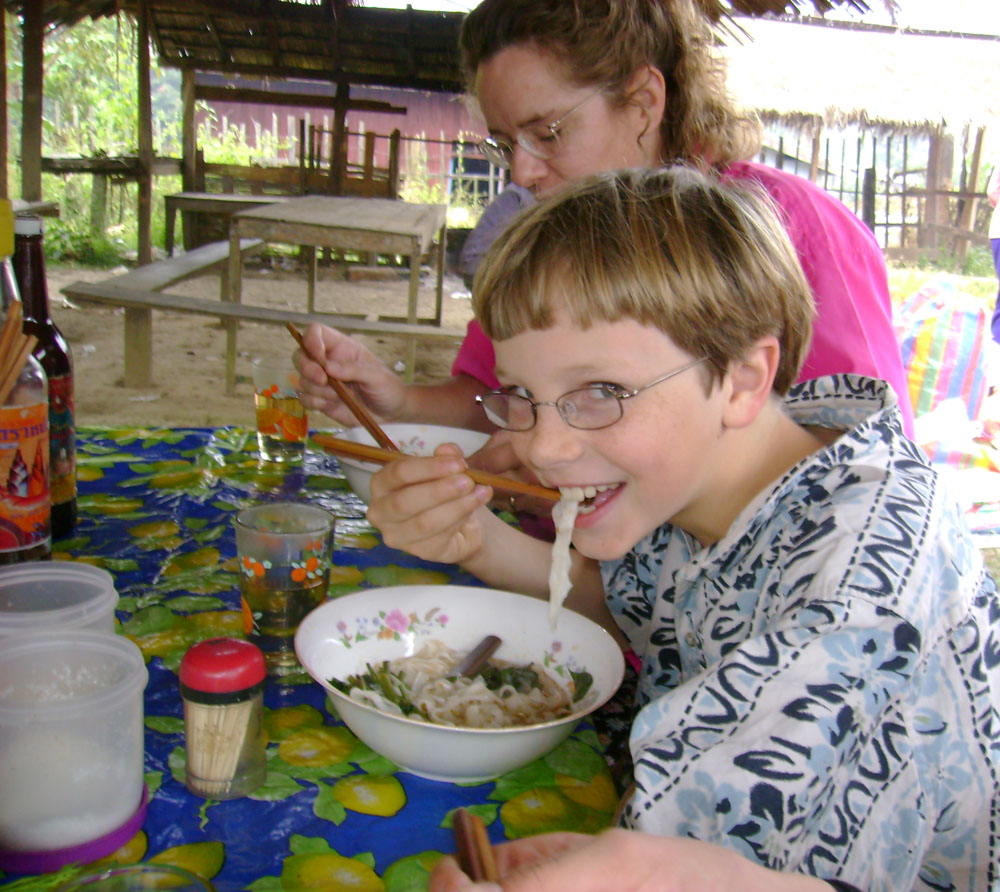 Another pho experience; this photo is from 2007.

After several minutes of the whole marketplace roaring with laughter, we wipe the accumulated tears from our eyes, and the cook serves us with four huge steaming piled bowls of chicken pho (pronounced pfuh guy).  Pho is a noodle soup with chunks of meat and an assortment of local herbs and spices dropped in.  You’re supposed to add various sauces that are provided on the table, but seeing as we can’t really read the labels on the bottles anyway (and they’re mostly salty), we tend to opt out of putting any of them into our bowls.  There is also always a huge heaping pile of fresh lettuce, mints, basil, and every other imaginable leaf that you are supposed to eat along with the soup.  Unfortunately, the leaves have been washed in local tap water or river water, which however safe it is for the locals to eat, we can’t because of all the different diseases that are in Laos’ water that aren’t in ours at home.

Dad took the first bite and gave us a look.  He mouthed the word salty. Our whole family groaned with disappointment.  When we asked for no MSG, the lady had assumed we would want more salt to compensate.  Caught up in our laughter, we had forgotten to ask for her not to add salt either (“bo sai gaena”).  The whole family drooped our heads; we do not like the copious amounts of salt and MSG that the Lao are so fond of.  Regretfully, I looked down at my soup to discover that I had also forgot to ask for no cilantro (“bo sai pak sinnali”), a thing that I despise in my food. Even the word “cilantro” makes my skin crawl. Oh well, I thought and gave into my hunger, doing my best to ignore the dreadful taste of my arch enemy vegetable and the salty soup. Next time, I’ll remember to ask….