It’s Dark, We’re Lost, and My Parents Are Approaching Useless – by Zall, age 15 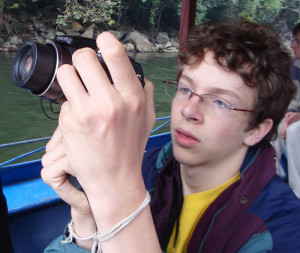 It was about 20 minutes into the walk and about a kilometer (or two) later that we realized we had absolutely no idea where we were. There was nothing along the road except empty water bottles and forest. My dad was losing his patience, and my mom was beginning to think about sleeping on the side of the road. Time to do the only thing that a traveler can do in that situation.

15 hours is a long time to sit on a bumpy, rundown, and stinky local bus. The Akha woman the next seat over has thrown up seven times out the window and you’re getting really bored of looking at the 100-kilogram bag of rice under your feet. The bus is packed full: there’s no way to change seats; even the aisles are crammed full of the locals, vegetables, and bags of charcoal. All that there is to eat is dried out local jerky of an unknown meat that was bought 3 days ago, and a stale bag of sticky rice. An angry growl emanates from your stomach, but if you eat any more of that food that you brought, you might need to trade places with the Akha woman next to you. 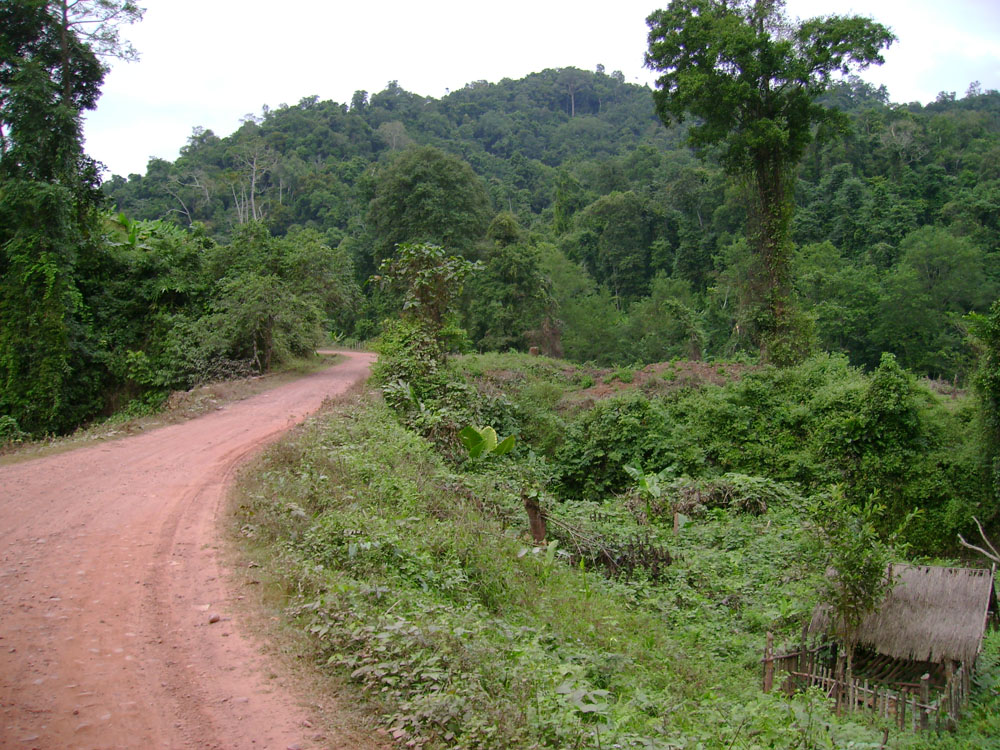 The highway to Phongsali, Laos.

We arrived at about 9:00 pm – about the time that everyone goes to sleep – at the bus stop of Phongsali. The bus screeched to a halt and released some toxic vapor out of the muffler. The locals got off the bus and looked for their friends who had come to pick them up. In about 3 minutes, everyone had dispersed and all that was left in the “bus station” (really just a dirty chunk of pavement on the side of the road) was my family, a songtheaw (pick-up with benches) driver, and a small lady trying to sell us an unidentifiable dark fruit. We pulled our coats tighter – the temperature was really cold for a place with banana trees, perhaps 50 degrees. The songtheaw driver approached us with a smile and managed to get across that he will drive us to the town of Phongsali for 50,000 kip. So, of course, we take out our Lonely Planet guidebook. In the book it says that the bus station is just a short walk up the road from the town (how were we to know that the bus stop had been moved since the book was published?). 50,000 kip (6 dollars) – this was just an obvious scam that the driver was trying to pull on some westerners who looked lost. We declined the offer and set off down the road. As the last vehicle pulled out of the station, we were alone at 9:30pm in the pitch-black with two backpacks per personand barely any food. What could go wrong? 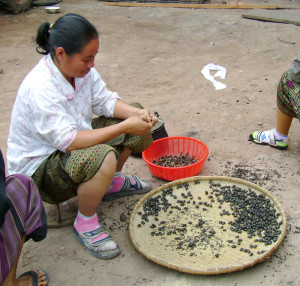 A Lao lady in a town en route to Phongsali peeling the wings and legs off of beetles in preparation for boiling and eating. A delicacy!

So here we are, having stumbled onward for a half hour. Dad has walked ahead of us muttering about bad maps and slow walkers. Mom had given up walking and was on the side of the road with that look that everyone’s mother develops: the “don’t mess with me or you will regret being born” kind of look. She was the one, after all, who had wanted to take the songtheaw. My brother is head-banging on the side of the road to a song he is thankfully keeping in his head, and I’m staring off into space imagining being home in my robe with a cup of hot chocolate and some brie cheese in front of the fireplace.

It seemed like a very long time until the echoing of a motor began to clap against the surrounding mountainside. We all stared hopefully at the bend 100 feet down the road. After several minutes, a car roared around the corner of the dirt road and stopped when we waved it down. Here is the part where the “language barrier” can be a problem. It took quite a few tries of sign language, English, and Lao before the message was clear: it would be a long walk to the town of Phongsali. The man smiled as we understood and motioned for us to get into his vehicle. Realizing that it would be getting into his car or sleeping on the side of the road, we opted for the vehicle. A 10-minute drive into town seemed like proof that the man really did know what he was talking about when he explained that it was a long walk. The driver refused payment for the ride, and dropped us off in town. My family stayed the night at a little guesthouse with bamboo mats for mattresses and rice and chicken for breakfast – much better than old jerky on the side of the road. 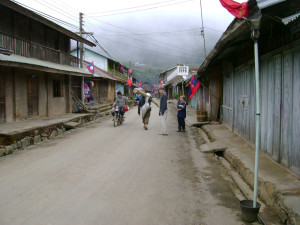 Sometimes as a traveler, it reaches the time to do the only thing that a traveler can do in certain situations: listen for the engine bouncing off the mountainside, and pray that a pair of headlights comes around the corner.