Questionable Cuisine and a Lesson Learned – by Zall, age 15

In all my travel experiences, I donʼt think that Iʼve never regretted something more than I did that night in Siem Reap, Cambodia.

I woke up in our hotel room after a night of taking in the sights, sounds, and smells of another country. Pain. Hurt. My head was light, my whole body ached. I fell out of my bed and tried to figure out where I was. The night was pitch-black except for a green blinking light in the corner of my vision. My sight was blurred. My body seemed to move without me telling it to. 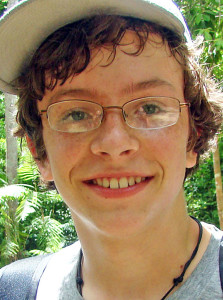 I have no recollection of the scene or any idea how I made it to the bathroom before I threw up. As if teleported, I was curled on a floor of sea-foam green tiles in front of the toilet. I had thrown up until there was nothing left but cramps – pain beyond anything Iʼd felt before. A few minutes later, one of my loud dry-heaves woke up my Dad. He came into the bathroom and did what little he could.

The night is choppy: like a bad film where you never really know whatʼs going on. I remember being boiling hot, my forehead was scalding and the temperature kept rising. My arms were shaking so intensely that I couldnʼt even take a drink from the luke-warm bottled water that we had in the room. At one point, I gave up and laid down on the floor spread out and felt the cool bathroom tiles on my bare back. I remember digging my nails into my arm so hard that my dad had to tell me to stop before I hurt myself. The night was long. Long. Long. Long. Eventually I ended up falling asleep on the tiles.

I woke a little while later and the sun was scorching through the windows. I remember the relief that spread through me when I could at last stand without my legs toppling under me and the joy that rushed through me when I realized the night was over. 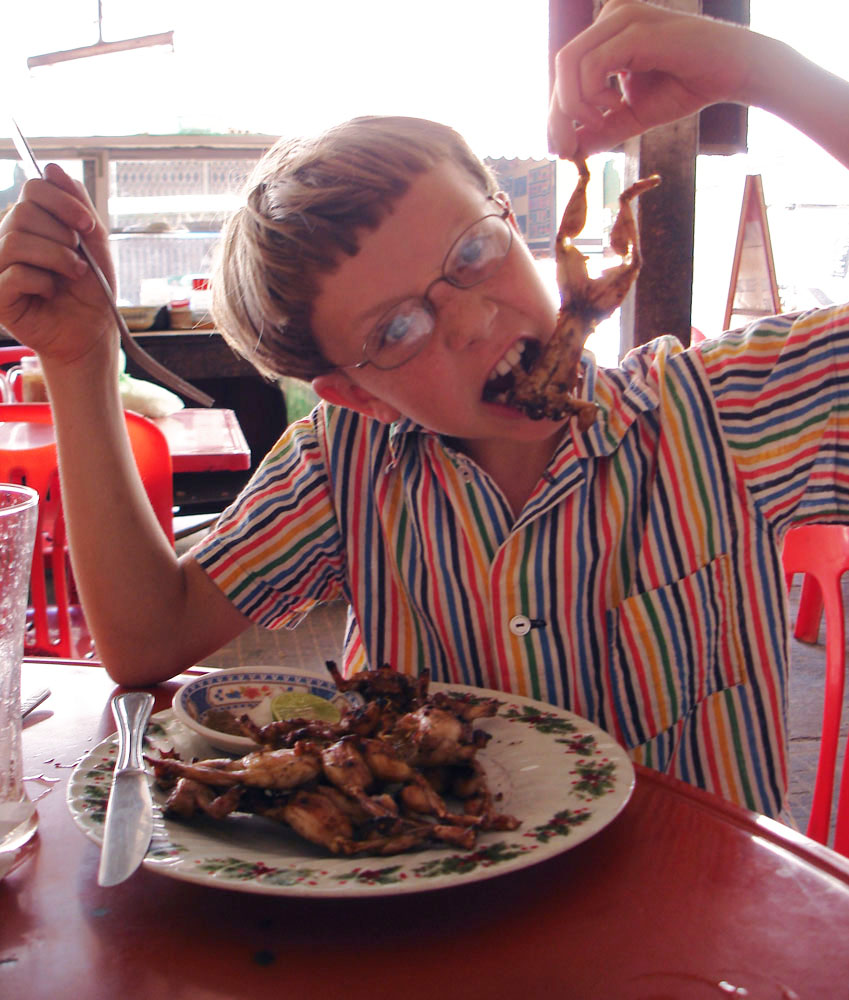 Zall, at age 9, two days before the events of his story. This is a healthy, local meal of fresh fried frog!

What I had eaten the night before was not a strange bug. Not a bat, nor some chewy internal organ. Not even a chunk of dog or rat meat. Instead it was at a higher-end western style restaurant – a “fish and chips” deluxe meal, Australian-style. I know, shame on us, but sometimes the craving for a taste of home is overwhelming and we give in to our desires. Consider that a lesson learned.

Last summer I was fortunate to go with a group of classmates for a exploration of some of the sites of southern Mexico, Guatamala and Belize. I warned my friends many times not to eat the western food that we saw. Or drink from the tap like weʼd been told. Needless to say they didnʼt listen. I chose to eat local cuisine for every meal – I think I was the only one not to get diarrhea.

Whenever someone asks me for advise on how to keep healthy on a trip to a foreign country, there are two things that I tell them immediately. Donʼt drink anything but bottled water, and DO NOT eat the food that is trying to be the food you eat at home. The street-vendor food, which is cooked fresh right in front of you, is the healthiest and safest meal to have. If the locals eat it, its most likely safe; locals don’t like getting sick either. So while eating in alley-way markets may seem sketchy, I have never gotten sick from local food.