Inspired Moments That, As Yet, Go Nowhere –  by Zall, age 15

Cultural oddities and strange experiences:  that seems to be the goal in much of our travels. Interesting and eccentric encounters.  The truth is, we encounter situations almost daily which don’t quite make sense or seem outrageously odd. Here are a couple of inexplicable and peculiar moments that aren’t full stories in and of themselves, but somehow stick in my mind as potentially valuable lessons to problems that I have yet to encounter. 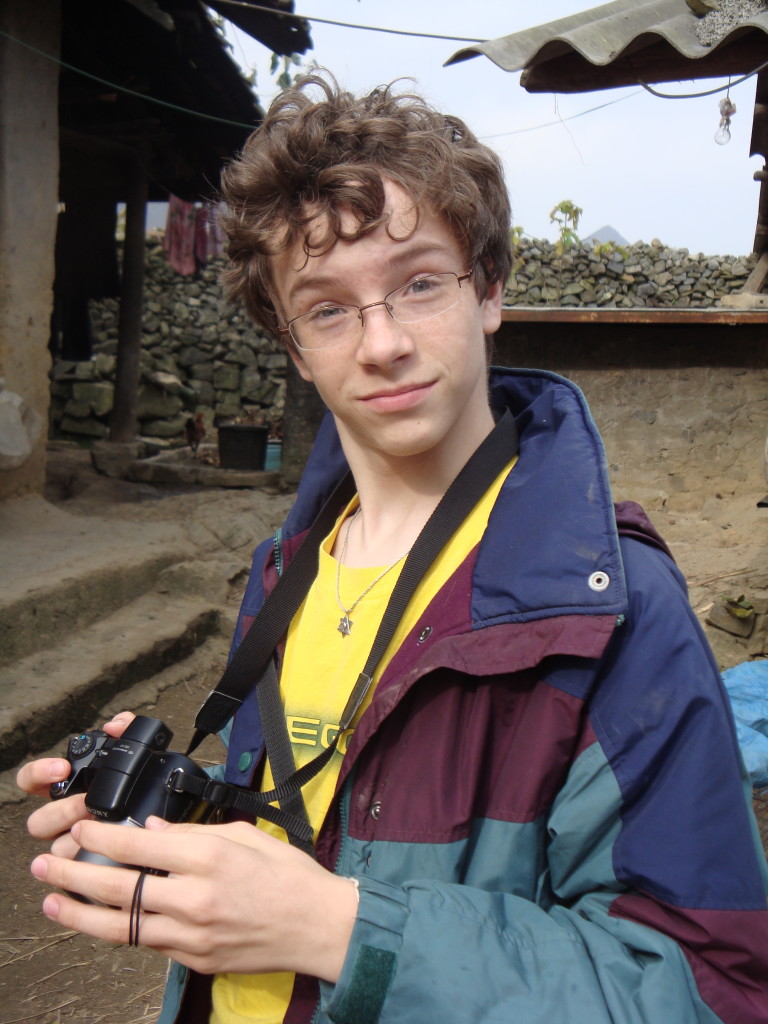 Zall, with a quizzical look, hard at work in Vietnam last year.

We were in a medium-sized town in Vietnam with seemingly nothing happening at all.  No people walking by, no kids playing in the fields, just flat concrete and dirt. It was the only village for quite some time, so we stopped to have lunch. Our family piled out of the van we were renting and sat in a small shop advertising pho (noodle soup) and other various local dishes. The shop had tile floors and a small group of guys were playing a card game in the corner and drinking beer. Being a long ride, I immediately went to the bathroom. Upon my return, the steaming pots of soup and a big plate of leafy vegetables that the family had ordered had already arrived and I sat down in front of my designated bowl. A man from the poker table walked over to where we sat and began speaking in a language far beyond our comprehension. He then sat next to me and put his arm over my shoulders – a friendly gesture in that area. But what happened next has perplexed me ever since. He leaned over towards the top of my head, his face flushed from the beer that I could smell on him. The cigarette between his lips dipped precariously towards my face, and he proceeded to smell my hair. Yes, smell my hair. He bent my head a bit sideways, stuck his nose right onto my scalp, and took in a big whiff.  He then looked at me with what I imagined to be an approving look, and with a smile and nod he walked back to his gang of card players. They all laughed and the meal went on like usual. I just sat there with a confused look on my face and laughed.  What was that all about? 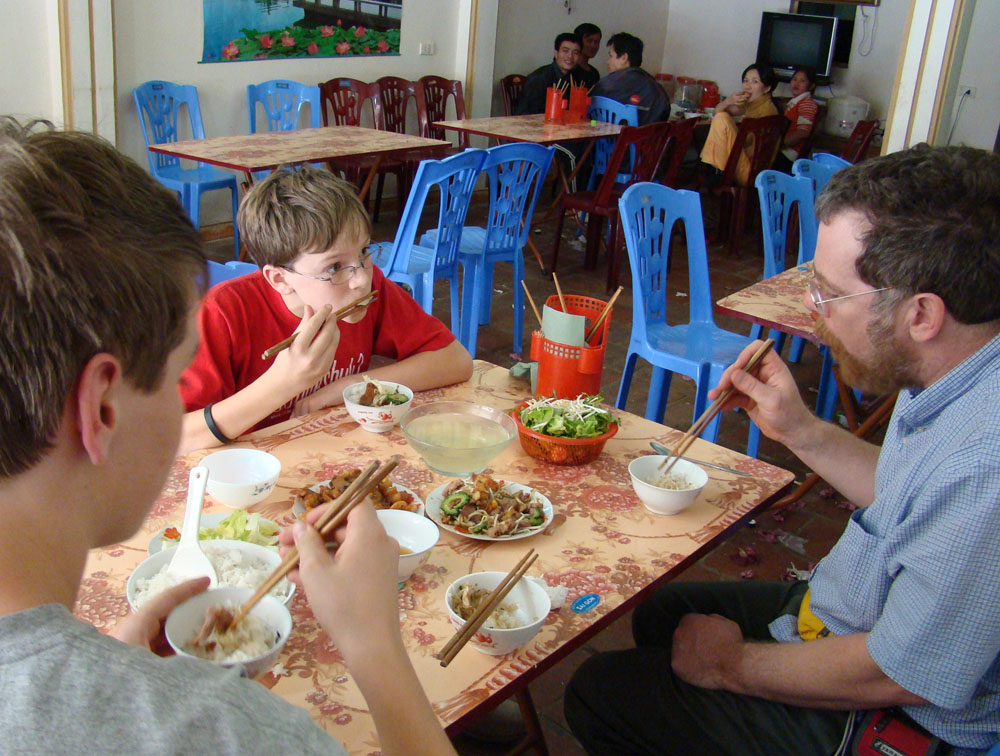 At the restaurant, with the card players looking at us from the corner. Smells good!

Going through borders in foreign countries can be rather strenuous. On my last trip through Asia, between the Vietnamese and Lao border, the border official ordered all of our bags to be searched. This isn’t uncommon as we are a bit unusual in the territory, but nevertheless slightly aggravating. We sighed and unstrapped all of our 8 bags – we’d done quite the recent shop – off the top of the bus. The officials went through everything until they hit the bag of medicine and toiletries. One of them then picked up a rectangular cardboard box and look at us mysteriously. He opened it and found a stack of wrapped paper cylinders within. He pulled one out and smelled it, like it might be a fine cigar. 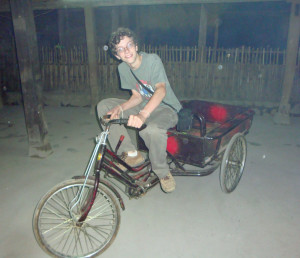 An utterly absurd “only Zall” moment – riding a tricycle cart downstairs at one of our homestays – if he could have brought it home, he would have! Notice his ever-present camera.

My mom was trying to best explain that the object he had chosen to question was a western-style tampon (they are not available in Laos) without embarrassing the guard – never a good idea with a police or military officer.  The questioning guard didn’t seem to understand English and we figured that hand signals would be inappropriate to use at the moment. My mom tried to explain that it was one of those “woman’s things,” but no one understood. Then guard then attempted to use sign language to ask if it contained something smokable, and he stuck the tampon between two fingers and pretended to smoke it. My dad then joined the conversation, shaking his head vigorously and continuing to search for simple words to explain.  Dad looked like he was working hard to suppress a laugh.  Another Vietnamese patrol officer then came up to the guard and said something to him. The guards expression tightened; he then shook his head and waved us through. To this day, I have no idea what was said or what the guard assumed, but we were quickly ushered through the border and into Vietnam with all our gear, including our “cigars.” 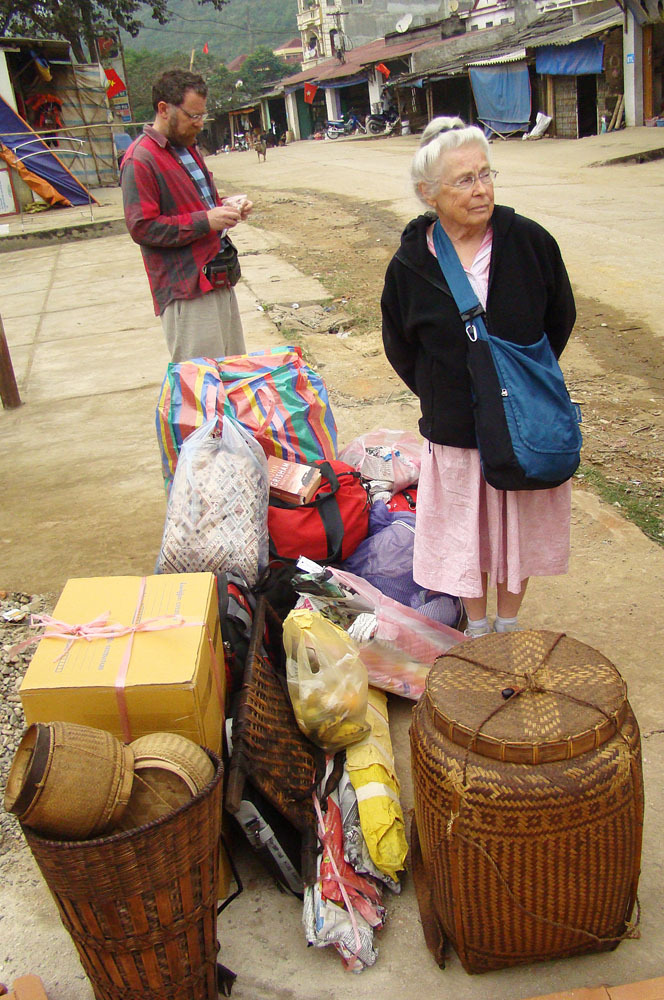 What our gear looks like when crossing a border. Here, in the border town of Na Meo, Vietnam, Dad and Grandma patiently (!) wait to move onward. Anyone going east? Something always works out.