A Basi, Some Chaos, and Common Ground by Zall, Age 16

A night to remember – if you can.

In my left hand I am holding, zooming, and focusing my camera – desperately trying to get one picture of the chaotic scene. Grease is running from the chicken neck that had been pressed into my right hand and an old lady is chanting prayers way too loud and far too close to my face. The woman is tying the traditional orange basi strings to my right wrist and the vice-governor is tying basi strings onto my left hand controlling the camera and I have no idea how I seemed to have gotten into this situation. Sounds like a perfect travel moment. 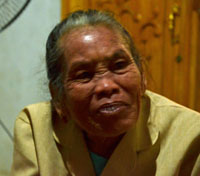 The “old lady” who is the Vice Governor’s mom, and who, as the elder and the mother of the man who had invited us to his home, led the chanting for the basi ceremony.

15 minutes earlier, the situation had been under control. We were about 8 games of petanque. 3 songs, 5 dances, and many toasts into the night and we had been invited to the ex-governor’s house for a late meal and celebration – of what I have no idea, but that didn’t seem to deter the merriment. As we stepped into the ex-governor’s house, a boisterous man that I had never seen before reached out, shook my hand, and brought me into the kitchen with a ceaseless smile. 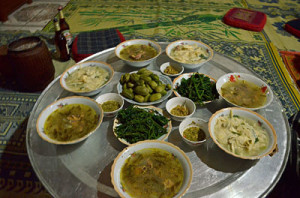 The post-basi meal being set out for consumption.

We were all plopped in front of a giant jar of lao hai.  The clay jar, perhaps two feet tall, had been filled with fermenting rice and, some hours earlier, water.  The tradition is that the host pours a buffalo horn-full of water slowly into the top of the jar while those sipping through the tall straws slurp fast enough from the alcoholic bottom of the jar so that the jar doesn’t overflow.  We all shared a turn filling our gullets with the light sweet beer-like alcohol to the encouragement, laughter, song, and dance of the fifteen or twenty people around us. 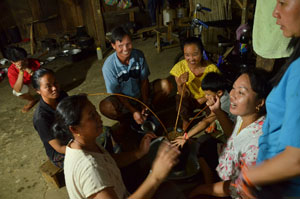 Our Lao friends laughing and chatting around the lao hai jar.

Before I knew it, we were whisked off again in a hurry and I was offered a floor pillow next to an ancient, bent-over lady. The elder first turned to my mother and grabbed her hands. They talked for a while with little common language, but with complete understanding.  There was something wonderful and real about the connection between the two mothers – language barriers didn’t matter in the least.  The elder then turned to me, grasped my hands, and stared into my eyes.  She may have said something or not, but I knew what she meant regardless. 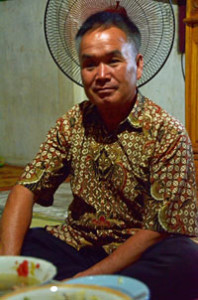 The ex-Governor – a man greatly admired in the region, was also invited to the basi. 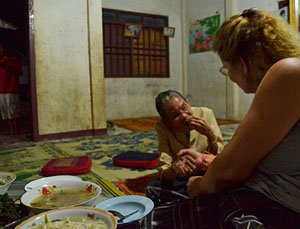 Mom and the Vice Governor’s mom bonding without need of common language – see the orange basi strings on mom’s arm?

The next thing that I know, 20 people are packed into the room with a dinner platter of gigantic proportions – chicken, soup made from greens, bowls of vegetables and jheow (spicy, garlicky condiments for dipping), and, of course, mountains of sticky rice. Before I could grasp what was happening, the basi ceremony had begun. The elder next to me starts a loud monotone chant which Mai translates to be about “good health, happy life, future prosperity, best wishes, etc.”  My memory becomes a blur at this point, and so do my photos.  A woman firmly presses a cooked chicken neck into my hands, chanting what I assume means something like “good wishes”; the warm grease drips down my wrists and onto my camera. Several adults and every kid reach for clutches of orange and white strings; three more people grab my busy arms and tie several basi string bracelets around each wrists, with every string being loudly blessed by the person tying it on.  Four months later, those strings still decorate my wrists.  There were more toasts, more glasses of Beer Lao were passed around. My plate was never allowed to be even half empty before some mom-aged adult reached over and shoveled more onto it.  Appetites and generosity certainly are a cultural universal! 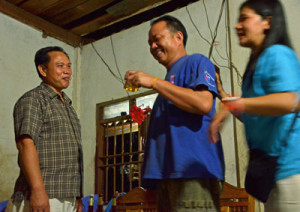 From left to right, the Vice Governor, Souk’s husband, and Mai – toasting is an important part of any basi cermony.

After several hours of partying and laughing, and the entire group standing up to sing a traditional “good-bye” song, we stumbled home from the former governor’s house and toppled onto our beds in exhaustion.